“Everybody knows me age now then, don’t they?”

The Quireboys have been a little busy over the last couple of years; hot on the heels of last year’s Beautiful Curse LP came Black Eyed Sons last June (reviewed here), interspersed with frantic continent-straddling bursts of touring. Somehow in amongst all of this, frontman Spike found time to put the finishing touches to his ‘labour of love’ album ‘100% Pure Frankie Miller’ – he got on the ‘phone to MR’s Ian Savage a few hours prior to leaving on the latest leg of the tour. 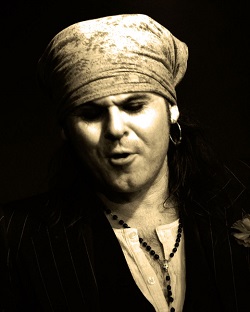 We start at the Whiskey on Wednesday, then across to Canada, four weeks!

Yeah, you’ve got a pretty hectic schedule ahead of you?

Right up until November, yeah!

Looks like barely a day off for about two months…

We’ve got a couple of weeks off when we get back – we actually fly into Manchester and do a show that night! It’s absolutely mental, you know?

Let’s start properly with the latest thing I’ve got, ‘100% Pure Frankie Miller’ – fill us in on that, it’s not something I was even aware was in the pipeline?

The thing is, this has been ongoing for four, five years; what happened was, quite a few years ago I did an album called ‘It’s A Treat To Be Alive’ and I sang a couple of Frankie Miller songs on it. And then when the Quireboys tour was happening Annette Miller would bring Frankie to the shows, and we got talking and became really good friends, and she said “look, I’ve got about three hundred-and-odd songs of Frankie’s” – some of them finished, all done from his home studio, ranging from the 70s up until he had his accident – so I went through all of them, decided what I was going to do…because people have been talking about doing this Frankie Miller thing, so I thought “I’ll just do it!”, y’know?

So originally I was just going to do a country album, but once we got Simon Kirke and Andy Fraser onboard, there’s some good rockers, you know? [But] we didn’t want to do it as a tribute album, that’s been done in the past… Frankie’s won country music awards and everything! He’s the singer’s singer, he’s my hero, and, y’know, Rod Stewart thought he was the best white rock singer ever…so it’s an honour for me to be able to do this.

Like I said, I didn’t want to do it as a tribute album, and neither did Annette, and when it got around that I was doing this album there were a lot of people ringing up – but they didn’t know me, and they didn’t know Frankie, and on this album I wanted to have friends of mine and friends of Frankie’s, who we all know. And eventually, we might even play live with everybody…

Oh, are there plans for touring it?

Depends on egos! *laughs* but hopefully if this goes well we can do a few more albums – there’s plenty of songs there, y’know?

That’d be fantastic; from a couple of listens this one’s really diverse, a bit country, a bit blues, some of the more up-tempo rocky stuff…

Well originally it was just going to be a country album, but then I’d been up to see Bad Company and I knew that Simon Kirke had been friends with Frankie, had played with him in the past, so I got in touch with him and he ended up playing on six of them or something, and then Andy Fraser, who was one of Frankie’s best friends, he jumped at the chance! And it’s so great, you know, Simon Kirke and Andy Fraser playing together for the first time in something like forty years?

The first time since Free?

Yeah – I mean, with modern technology…we couldn’t play live together so I put the songs down to a click, with me just playing guitar and singing, and I sent those off to Simon who put the drums on there, sent them to Andy to put the bass on in Los Angeles, Ian Hunter was in Connecticut or wherever, and once I got everybody playing on it I went to Ronnie Wood’s house to put down some guitars with him, and then I went to Rockfield Studios – you know Rockfield?

Yes, didn’t you do the last Quireboys album there?

Yeah, and I put everything back onto tape there – every single track, I put back onto tape to mix it so it had that nice warm feeling, rather than a kind of computerised thing…and it was kinda weird, because while I was in Rockfield, Kingsley, the guy who owns it, came in, and it turns out he’d recorded Frankie Miller’s first ever album there!

So it’s all come full circle?

Full circle, yeah! And he was telling us some great stories about him, so it’s weird how that happened – it [the album] was a lot of hard work organising stuff, I was always sending stuff to Frankie and Annette, and he can only really communicate through Annette, but he’d tell us “oh, I don’t like that there” or “I like that” or whatever, so he was involved all the way through.

It’s a really good album for musician-spotting, where you listen to it and think “oh, that has to be Luke Morley” or “that’s Ronnie Wood”…

I DO love it on ‘I’m Losing You’ where Ronnie does that kind of ‘Waiting On A Friend’ line at the end – Ronnie played on ‘Cocaine’, ‘I’m Losing You’, and ‘Keeping It All For You’, and he played on a couple more but I haven’t used them yet. I recorded about eighteen, nineteen songs, but we had to cut it down; but if we do get to do another one, I’m ahead of the game!

We’re looking at doing some live shows, once I’m finished with the Quireboys in November – maybe early next year…

Have you got a personal favourite of Frankie’s?

If you ever hear him sing ‘Jealous Guy’ by John Lennon…my god, it just breaks my heart, it’s incredible. And another of my favourite songs is ‘When I’m Away From You’, which I actually did on a solo album at one point…but from these new songs, it was so difficult to pick; we started out with three hundred-odd, then a hundred, then fifty, then what made the album, y’know?

Did you pick songs out for specific people as they confirmed that they’d be involved?

No, not at all – I’d already picked the songs and people said what they wanted to play on…although when I saw Ian Hunter, he’s such a great boogie-woogie player, I thought ‘Cheap Hotel’ – the piano, the way he plays it, he has to do that. And with the duet, ‘Fortune’ is such a great song, and Bonnie [Tyler] had heard that song before, and she always loved it. Frankie used to send a lot of stuff to Bonnie to record, and she’s such a great woman, it was an honour to sing with her.

So you’re off on tour tomorrow supporting the new Quireboys album – there seems to have been a bit of a flurry of activity over the last year, with two albums and a lot of touring…

Well, we’ve spent a lot of time touring and never really had time to do an album! We’ve got new management, a new record deal and everything, so…we’re like a bus, y’know? *laughs* nothing for ages and then two come at once…

And they’re both great albums, but kind of different from each other…

Thanks – y’know, we pull it together when we have to! What we did was, we recorded eighteen, nineteen songs [for latest release ‘Black Eyed Sons’] and picked out the best of them, there wasn’t any conscious effort to make it different from the last one.

When we were talking to Paul [Guerin, Quireboys guitarist] last year he mentioned the possibility of an acoustic album…

Well, we were going to go in during December and do an acoustic album, but the guys are out with Joe Elliot with the Down And Outs. So we’ll probably go and do something like that in January, because I’d love to do it; the acoustic shows have gone down so well…what was that album we did. with a few covers and a few Quireboys songs acoustically? [Halfpenny Dancer] Anyway, I’d like to do something like that again, we enjoy doing them.

We were thinking of writing a whole acoustic album, maybe a couple of covers – we’ll see! But it’s a lot more scary than normal shows, because you’re completely laid bare; it does show how we write songs though. Every ‘normal’ song, we can play on acoustic and turn it into a country song…I mean, we played Sweden Rocks and went on before Rush in front of forty thousand people and played acoustic! We’d known Rush for a while, and they didn’t want to have a band on in front of them who’d have loads of equipment and stuff, so they asked us if we’d do it acoustic, and it went down a storm! That’s actually on the Black Eyed Sons release…

It seems that the Quireboys are still faring quite well on the record label model of releasing music, and haven’t resorting the the crowd-funded path – what’s your take on that?

Um, it certainly works well for some people – I remember when we were doing the Classic Rock festival, and the guy who runs Pledge[music] was telling me all about it; you know, we haven’t gone down down that road yet, I don’t really know very much about it! I know that Ginger did quite well out of it…it might be a good idea to do one like that, I don’t know; it kinda feels like you’re begging for money to me *laughs*

There’s been a little bit of Quireboys ‘thirtieth anniversary’ activity lately, which makes me feel old…

Well no, it’s not really a thirtieth anniversary thing; I started the band when I was, like, seventeen, we did our first show at the Half Moon and it’s a thank-you to everybody that’s kept us going that long. I mean, the first album wasn’t out until 1990, so it’s not like an album anniversary – it’s just a way to say thanks.

You may have anticipated my last question; on your own Wikipedia page where most would have a date of birth yours simply has ’20th century’…

*laughs* Everybody knows me age now then, don’t they?

Do you have a portrait in an attic somewhere?

*laughs* I wish! Just wait till you see me close up, mate! *laughs*

The Quireboys’ new album ‘Black Eyed Sons’ is available now; Spike’s ‘100% Frankie Miller’ is released on the 8th of September via Cargo Records.