“We are the only Gods we need…”

Thank you very much for taking time out for this interview and congratulations on Negative Void Trinity (reviewed here).

Greetings from the circle. Thanks for the kind words and for this interview.

What was it that you wanted to achieve with the EP?

Negative Void Trinity has been an attempt to shake all organized beliefs about religion, a way to transmit our inner purpose to the outside world, or just an explanation of our choice to become our own gods.

Co.de.x. and Virus had the songs ready by 2010 (under the name of Declaration:Holocaust) but firstly due to financial issues we couldn’t record anything decent. After forsaking the name and adopting the “Septuagint” identity things had already started to stir and once Co.de.x. started collecting recording gear etc. we recorded the EP but the results we disappointing, so drastic changes took place such as gear changing, alternative tunings and a lot of changes in tracks until we were completely satisfied both with the compositions and the recordings which took place in summer 2013. 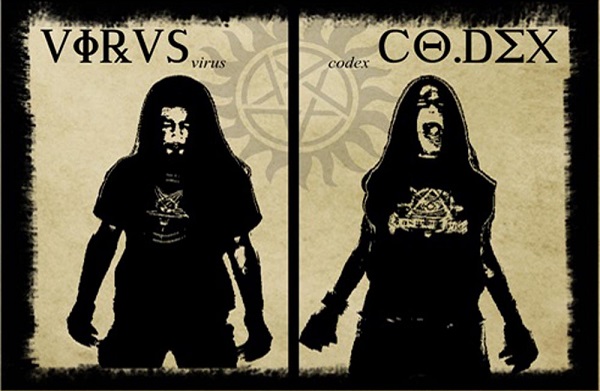 When writing for Negative Void Trinity, did you have an idea of how you wanted the songs to sound or did each of the tracks and the EP take shape as it were being developed?

As stated above the main idea was complete but each song manifested itself in its complete form over time.

Can you tell us about the EP’s title, its significance, and what it means in relation to the music?

Trinity resides in all things; everything has a start, an end, and an infinite number of roads that lead to it and so on. The Negative Void is what we are before we realise this path and our own true purpose. It is something we are not in fact but meant to be. But another perspective is how we see the theological trinity of Christianity as something purely negative and empty.

What are the lyrical themes on Negative Void Trinity and what inspires them?

The main theme of the release is the kind of relation that man has created within with God, Satan and the Man himself and it is a progression on those matters until ‘Psalm IV’ where the Man is released from these earthly chains and creates his own path of divinity.

The EP has four ‘Psalms’. Can you tell us about these, what they’re about, and how they relate to each other?

Each Psalm is related to the next, it is the logical progression of Man against his thoughts, beliefs etc. in a way it is a path to self-illumination. Also they are musically connected to each other in their own way.

It was a concept that Co.de.x. formed when he started composing the album that stated off as an idea and became the goal itself.

Are there any influences outside of music for Septuagint? (literature, art, etc.)

Our influences are part of our own lives, our personal studies or experiences throughout the years.

Is there a theme, a concept, or a philosophy that underpins Septuagint’s music?

Not exactly, there is a personal philosophy to each and every one of us that differs from one another but reflects itself upon our music and lyrics.

Why choose to work with Forever Plagued Records for the release of Negative Void Trinity?

Forever Plagued is one of the labels that truly supports Septuagint, black metal and its purpose, and besides that they worked with some close friends recently which made it something of an obvious choice since they were really satisfied.

Who designed the artwork for Negative Void Trinity? What was it about their work that drew you to him/her?

The artwork was completely created by a really close friend whose identity shall not be revealed due to his own choice of anonymity.

How much direction did you give the artist in its creation?

The designer had been a part of the EP’s creation and has known us for a while which made him the perfect candidate for the job. Every detail is his own creation observed and approved by us.

What does the act of creating music mean to Septuagint, individually and collectively?

It is a way of discovering our inner self, and a continuous struggle with our own passions, fears etc. And in the end it is a way of expression and relief though each song.

Septuagint was formed by Co.de.x. and Virus in winter 2006 (originally under the name Declaration: Holocaust). What was it that drew you together to form the band?

The fact is that we are blood brothers that happen to be in the same state of mind for years, in a way through Septuagint we complete each other in our weaknesses and strengths.

What was the meaning behind the original band name, Declaration: Holocaust?

It was a statement of self-catharsis to a new state of mind, consciousness you name it.
A massive wipe out of the personalities we were before to set the soil for a new spiritual journey that will shape us to what we are now.

Your first release was a two-track promo in 2010. Why so long to release the band’s first statement?

At first we didn’t have the means nor the money to do such a thing, so we had to wait until we were able to do so. Of course other problems occurred along the way but better late than never.

Why change the name to Septuagint? Did the change signify a new era for the band?

The word Holocaust was a taboo word for some labels and some people who considered us NS though we never had any relations with that kind of B.M. so it was a change that we thought was necessary. It was also a new era for us; we were settled and more focused on the release.

The band has recently been joined by drummer Nycriz and bassist Iconoclast. Why did you choose to work with them? What do they bring to the band?

Nycriz is a musician that we admired his work with Aenaon, and besides that he is a person that really got to us in a way, the communication is perfect and the results even better. Iconoclast on the other hand is a man that can really handle the bass duties and his work with Atom is astonishing.

What does the future hold for Septuagint? Is there more material in the works? An album?

From now on Septuagint will be fully active and soon for some live shows hopefully, but right now we are working on an upcoming split release with some great co-operations that if possible it will be out in winter 2014-2015 and after that an album is planned.

For now we are in the middle of live show preparedness and hopefully in September the gates shall open to spit our filth into the world. As for UK for now nothing planned but hopefully something will come up.

There are no Gods, only Chaos and the path to self awareness and improvement…
We are the only Gods we need… 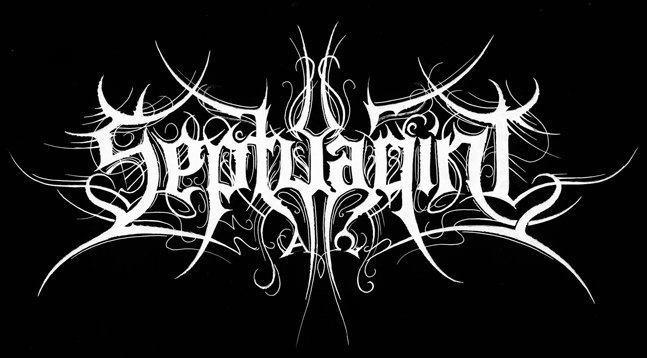