Just before hitting the stage for their gig at Nottingham’s Rock City (reviewed here), Incite’s Richie Cavalera (yes, Max Cavalera’s son) spoke to MR’s Gary O’Brien about, amongst other subjects, the tour and crowds in the UK, the new additions to the line-up, the new album, and playing with Sepultura and Nailbomb before he was even ten years old!

Cheers for taking the time to speak to us tonight, how’s the tour going?

It’s been great, you know, it’s the third time in the UK for us and to have the crowds we’ve been getting is brilliant. We’ve had a couple of slow shows but a couple of packed ones and it’s been a cool feeling to be here, getting the ball rolling and hopefully it’s the start of big things for us, we’re having a blast, man..

How have you found the crowds in the UK, compared to the US?

They’re great, everyone comes out they want to buy merch, get pictures taken, they all rock out in the front row, it’s really cool, everything’s been really special to us over here.

How are the new band members fitting in?

They’re great, I’ve had the rhythm section out on the road for a couple of years now and Dru, the guitar player is having a great time, the shows are really cool for him, he’s giving it everything he’s got every night and that’s good to see; not bitching and complaining.

That leads on to my next question, what caused the personnel changes? Was it a clash of personalities, musical differences or a combination of the two?

No, there was no clash, Gene just wanted to go off and do his own thing and start his own projects, which is great. He helped us get through the tours, which was what we really needed and we had a good time but as a young band you go through periods of learning; knowing who’s right and who’s wrong. We feel like we now have all the right pieces: the right band, the right record, the right label, it’s all coming together great.

I guess not everyone’s a road-dog, some people just prefer to play in the studio, rather than go out on the road?

That’s right; it catches up and kicks your ass sometimes. It happened to us the other night in Glasgow, we’d had kind of a slow show, the P.A. sucked, the van was parked on a slope, no one could sleep, then it started raining and the A/C was leaking water all over everyone, it tested your patience but it was great man, we loved it but it’s brutal, not glamourous like everyone thinks it is, that’s for sure.

The new album, I love it and there’s a definite progression from the last couple of albums. Some of the breakdowns and solos are really melodic, was that a conscious decision, or something that evolved organically?

Yeah, definitely, being the thrash band that we perceive ourselves as being, that kind of noodling solo doesn’t work. We love that melodic feel where everyone in the crowd can feel the emotion in their hearts Dru does a great job which really excites me for the next record. It provides some contrast and taste.

Absolutely, there’s a lot of light and shade that you don’t get with a lot of heavy bands these days.

Having Matt Hyde (Sum 41, Slayer, Adrenaline Trio, Monster Magnet) on board producing, was huge, he really kicked our asses into shape and taught us things about ourselves that we didn’t previously know, going into the recording. The new members all had an input into the sound and we kept the core writing team with Kevin McAllister which kept the songs consistent. The first two records were us trying to grow and on this record we hit where we wanted to be, with a lot of dynamics that hadn’t been there before. We slowed things down, so things hit hard and then in the breakdowns the grooves really come in and solidify the sound and it feels good having developed more of our own sound now. 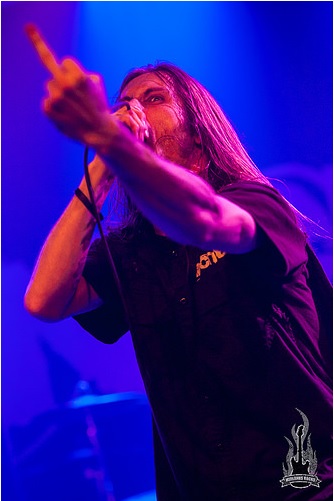 Lyrically, there are changes too with far more intelligence on show than is usual for the genre. What influenced you this time round?

I wanted to show more of myself this time around. The first two records were me singing what I thought was expected of me, you know, just sing about bad things. This time around I wanted to make it far more personal and current, like with ‘False Flag’ and the crazy things surrounding 9/11 and other things happening in the world right now, it feels like it’s not been like this since around the time of the JFK assassination. I wanted to give people me and not what I thought they wanted to hear. I based the lyrics on current affairs and my own personal life: girlfriends, the recession, friends passing away. It was a real crazy time and I finally had a lot to say about the world around me.

A bit of a random question; was the first time you played live really with Nailbomb at the Dynamo Festival in 1995?

No, actually it was with Sepultura in about ’93 and a couple of times after that but Nailbomb was my first time at being in absolute awe of what music could do in front of a crowd that size, it was amazing and I consider that my turning point into getting into music seriously.

How old were you?

I was 8 or 9 years old and had a Mohawk that Billy from Biohazard had shaved into my head. I’d been touring with Sepultura and begging Max and Andre to let me up on stage all the while. Even prior to Max I’d been around Atrophy and appeared on the cover of their Violent by Nature album. Rob Halford and Poison played at the bar that my Mum opened and when Max came along it catapulted my love for everything and too see it first hand, touring with the like of Ozzy and Pantera and all those bands we cherish so much, it was life changing for me; I could never be a dentist after that!

Did you know Alex from Nailbomb came from around here?

Yeah, it’s really cool, my sister called and told me she used to come to this venue and see him play. He lives in Seattle now, we tried to get him to mix one our records but he’s not into that now.

So, no more Nailbomb records then?

Ha, no, we still speak to him and have a great relationship but he says he’s just not pissed off enough anymore to go back there and that’s understandable, he’s found his life and he’s happy.

Do you still play guitar?

Not so much, I play kind of odd, as I’m left-handed but play a right handed guitar with the strings still strung for a right-hander like Hendrix and a few of those other guys, so it sounds kind of weird. It’s why Max wanted to put it on the Nailbomb record as it creates funny accented sounds. I’ve thought about maybe breaking out a guitar and playing on a couple of tracks in our live shows in future; if it works, it works, if it doesn’t, well, nothing lost!

I guess because of your upbringing, it was almost inevitable you’d end up playing metal but what else do you listen to?

Oh man, I’m the biggest fan of like, Journey and Fleetwood Mac. After a day of playing metal and all the rigmarole of touring it’s great to get in the van and listen to that era of music when bands just went out and played rock and roll. There’s never been an era like it and it influences me so much in terms of melodic sensibilities. We listen to Sabbath and Elton John and Fleetwood Mac, just bands you wouldn’t expect. The whole band are the same, the only thing we don’t cross the line into is Nu-Rap, Nu-Country and pop music, that stuff’s just garbage, that’s not music anymore.

Yeah, Nu-Country is just ‘Pour Some Sugar on Me’ re-written with different lyrics every time, whereas I could listen to Johnny Cash all night!

So, plans for the future, just Incite, or do you have other things you’d like to do?

I’ve been so busy with Incite recently that it’s taking up all my time but I’d love to guest on a couple of albums, maybe play on some old rock-style stuff, I just love music; maybe start a Stoner-Rock band in future, you never know. At this time though, it’s just Incite, we have the album out, we’re off headlining in the US next, it’s what I’ve devoted the last ten years of my life to doing, starting in friend’s garages to where we are now. We have great agents in both countries now and everything is really coming together.

Touring the UK as headliners has been a surreal experience for us and I want to continue with that for the guys in the band and for the fans.

So finally, I tried desperately to avoid the ‘Dad’ question but have you not thought about bringing Max out to hand out flyers and sell some merch?

No really, it’s there, I’m not afraid to talk about it. It’s a great part of my life and it’s why I do what I do. Growing up watching one of the top metal performers of all time coming from where he did in Brazil to what he does now, has been a crazy experience. I always have someone to speak to whether things are going good or bad. If I’ve had a show where I’ve only played to four people and things haven’t gone well, I can call Max and he’ll tell me about shows in Amsterdam where it was just them and the sound guy but they went out and played like it was a fucking sold out show. His advice inspires me to be what I am: I drive the van to shows, I sell the merch, I play the show, then I get back in the van and drive again and you know what, I love it!

Well, I figure it’s time for you to go and play now: thanks for your time, good luck with the show and have fun with rest of the tour.