First of all, can you give us a quick history of how the band came together?

I played in a death metal band in 2010, and we needed a drummer, a friend showed me a female drummer, and we began the idea for a female band. I searched by one year female members, bassists and vocals, many girls, but nobody was the ideal. In July of 2011, I found Fernanda Lira to be bassist, she is perfect for us, because she has the same idea, she suggested to make a test of vocal, and when I listened I liked very much! The band had 4 songs before Fernanda Lira, but after that she joined the band, the first show happened and we recorded our first demo, and the band began to walk on.

Nervosa are still a relatively new band yet you’ve already had line-up changes. How important is the current line up to the overall sound of Nervosa?

We have a perfect line-up today, we are like sisters, and this harmony is very important for our songs and our shows, a good vibe is essential to write good songs, in the shows people can notice we are united.

Nervosa are described by many as a thrash band but the first thing that struck me about Victim Of Yourself was there’s also a strong death metal sound. Do you see yourself as purely a thrash metal band or are their other influences?

For me, Nervosa is a mix of influences of Thrash and Death Metal, because when I write riffs, I choose double picking from Thrash Metal with macabre melodies from Death Metal, and naturally this makes sense because my influences are Thrash and Death, bands like: Cannibal Corpse, Exodus, Vader, Slayer, Morbid Angel, Destruction, Sodom, etc…

Victim Of Yourself is the band’s debut album (reviewed here); how representative is it of the band? Do you feel you have a lot more to offer?

This album represents a lot for us, because it’s our debut, it’s the beginning of our career. This album was composed 50% by me and 50% by Fernanda, and this symbolizes the personality of the band, because our EP demo was composed by me, and Fernanda only gave some opinions, so now, we have an album that represents a real personality of us. I’m so very anxious for the next album, we have a lot to do, and I want to compose with the new drummer Pitchu, and I will be with a better gear, with a Signature guitar from Purkott Guitars and signature pedals from Ed’s Mod Shop too.

Marcelo Pompeu of Korzus produced the album and Heros Trench mastered it, were these people chose yourself?

Mr. Som is one of the best studios for recording Metal in the Brazil, and we wanted to record in this studio before making all songs. We recorded our EP Demo there, and we liked so much the results and we decided to record again with them.

The album artwork is very old school, recalling the likes of Iron Maiden and Death; is this something you felt was an important ingredient?

When I thought in an idea for artwork, I thought in all that we lived at that moment, and to represent Victim of Yourself, two skulls killing each other was perfect for me, a skull is something that we love, and represent the aggressiveness of metal. And we chose Andrei Bouzikov to design this idea.

Musically, the album sounds very angry; what are your inspirations when writing lyrics? Are you politically motivated or do they come from more of an emotional place?

Brazil is a very corrupt country and we pay many taxes, and all is very expensive here, this is the reason for our anger; there isn’t a fair law, only the poor is punished, the bandits make what they want, and we are assaulted, killed, stolen, etc… The reality is our bigger inspiration, injustice, war, corruption, prejudice, etc…

Nervosa are promoted as an ‘all-female band’; how do you feel about this being used as a selling point? Surely the music should be left to stand for itself regardless of the sex of the band members?

Play around the world, be able to play in all places, start to write a new album soon, and make many shows!

Nervosa are but a small part of the burgeoning scene in South America, are there any up and coming bands your fans should be checking out?

There are many headbangers here, it’s a scene with a lot of potential, our scene grows each day. Old bands that are active and are very good are Korzus, Krisiun, Torture Squad, Ratos de Porão, Sepultura and new bands are Lacerated and Carbonized, Voodoo Priest, Krow, Vocifera, Skinlepsy, etc… And old bands that returned now like Anthares, Executer, MX, Disaster, etc…

Thank you so much for the opportunity! I always say: Respect all bands, even if you don’t like, because each job deserves respect, because there is a dedication involved and there is a hard work behind the art. Thanks to all readers, because the magazines, blogs, zines, etc. are nothing without you! 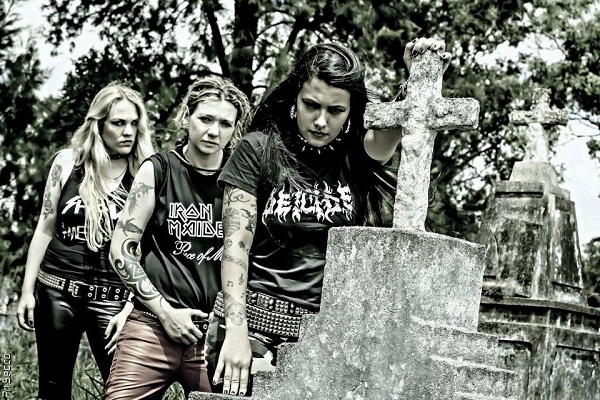