Hi Per. Thank you very much for taking time out for this interview and congratulations on Vinteroffer (reviewed here).

Hello Jason, nice to meet you and thanks for contacting us!

With Vredehammer being conceived in 2009 and a number of EPs and singles already released under the name, what was it that you wanted to achieve with Vinteroffer?

World domination, money, and lots of naked chicks. Next question!

No, basically, I thought to myself that if I was ever gonna get anywhere with my music, it was time to get out of the doing everything from home / solo-project situation, get a good band together and record a good album. Luckily I found some awesome musicians who wanted the same thing, so here we are today with Vinteroffer seemingly making quite an impression on metalheads around the world.

Is there a theme or a philosophy that underpins Vinteroffer?

No, the album is mostly a compilation of songs I’ve had lying around for up to 10 years, so the material and lyrics are kind of  representative of different stages of my inspirations during the last decade.

Is there a common attitude that each of you shares that perhaps wasn’t present in your previous or other bands?

At the moment, I am the main composer, and I think this always will be the case with Vredehammer. On the other hand, my bandmates and I go way back. We are very good friends who share the same dream, and that is to get out there and have a musical career. Of course we don’t know how far we will get, but we hope to be able to do this on a professional level for many years to come.

Musically speaking, how has the band developed since its inception?

The first release, 4. September, was very straight forward black metal. After this release I started being more true to my own musical preferences, meaning the compositions became more varied and interesting (in my point of view), and was no longer tied to any specific genre of metal.

How do you approach writing? And how much input do the other members have?

The songs are written at home, mostly by me, but so far our other guitarist Kristoffer Hansen has also contributed with some great riffs, and I’m sure more ideas will appear from all band members. I would also like to mention that the whole band works very well together on all the other aspects besides song-writing. Bookings, financials, promotion, etc. are done by all band members and we’re starting to consider this our second job in many ways.

How does your music begin life? An idea, a melody, a riff, a lyric, a theme?

All of the above. Sometime riffs appear out of the blue while I’m just jamming on my guitar. Sometimes a drumbeat can start an idea, sometimes a melody appears in my head and even sometimes I dream the music, wake up and record the idea on my phone before it’s forgotten.

Can you tell us about the artwork and how it relates to the music and the band?

Sure, the titletrack ‘Vinteroffer’ is about the black plague and winter. The rest is up the each individual to interpret.

Who is the artist? What drew you to him/her? And how much freedom did you give in its design?

The artist is Røbert Høyem. This guy has done a lot of artwork for bands on Indie Recordings and we’ve always liked his style. We discussed some ideas with him and the result is obvious.

Why did you choose to work with Indie Recordings?

We had some other good offers when it was time to sign with a bigger label, but after having talked to the general manager at Indie, we were pretty much sold. The label is getting bigger and bigger, the guys (and girls) working there are really nice people, they have a great promotional network. And they are Norwegian, which is a big bonus.

Yes, we have a ten date European tour as co-headliners with Six Feet Under this Easter, but sadly England is not on the poster this time. Besides that we only have some local gigs planned for the rest of the year. We are always looking for shows, so if any promoters want us in England, we won’t hesitate coming there! I’m sure we will be doing more shows and tours as soon as our album has worked its magic on the listeners out there.

On the subject of live performances, what would be the ideal setting and/or venue for a Vredehammer show?

Everywhere, anywhere. It’s not the amount of people, the name of the venue or the size of the festival that makes a good show. It’s the audience attending. If the chemistry between band and audience is right, magic will always happen!

What does the future hold for Vredehammer? Early days I know as the new album is on the verge of being released, but is there more music in the pipeline?

Yes, the next album is almost finished and we hope to enter the studio again already this summer. We feel pretty certain that the new Vredehammer material will carve irreversible scars in the hearts and minds of many metalheads out there!

Thanks for showing interest in us Jason. And last but not least… I want a beer. 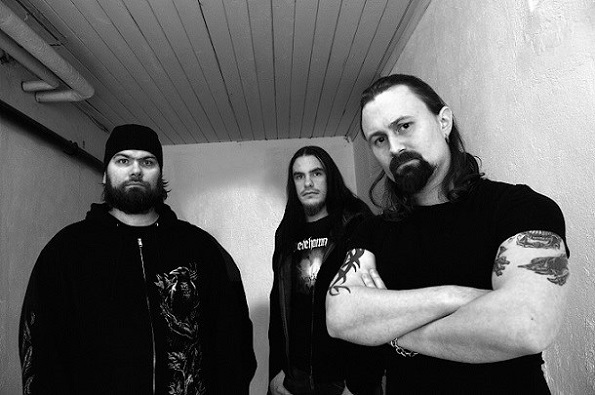