Hey Paul, Lost Weekend have been around for quite a while now but for anyone new to the band can you tell us the Lost Weekend line-up how you got together and how you would describe the band’s sound?

I would say we have a very British rock sound, the likes of  a UFO and Thunder feel to our sound with elements of melody based on  American AOR but yeah British for sure.

You have recently recorded your sixth album ‘Evermore’, when can we expect it to be released and will it be on a record label or an independent release?

Evermore will be released on 21st June 2013 on the AOR Heaven label and we could not be more delighted.

Who are the principal songwriters and what is the song writing process like in Lost Weekend?

Dave, myself and with Irvin coming back he also contributes immensely, also for the first time Robin has stepped up to the plate, which again as broadened our musical style further.

On your last album ‘Fear & Innocence’ you took a more classic rock approach and toned down the keyboards. For ‘Evermore’ you have welcomed back keyboardist Irvin Parratt, is this a sign the new album will have a stronger keyboard presence akin to your earlier albums?

Yes, with Irvin back in the fold it gave us greater scope to explore the keys and give us our signature sound, really.

Can you talk us through some of the songs on ‘Evermore’, song titles, how they were written and what they are about or stories behind the song?

Track one is ‘Reach for the sky’, inspired by a chat with some World War 2 veterans, it describes how they are feeling and how alone at that point in the air these guys were, it’s also the subject matter for the video we have filmed and will be released very shortly.

‘Angel sublime’ is about a family searching for their missing child and is based on a true story – a very emotional song.

‘Perfect day’ in contrast was inspired by our magnificent Olympians and is a very upbeat catchy track.

‘Fallen by the wayside’ is the polar opposite and is a song written solely by Dave in memory of his late mother Charlotte for whom we have dedicated the album. The rest? Well you’re going to have to get the cd to find out, ha!

You have just filmed the first ever Lost Weekend music video, what was that experience?

We rehearse in some studios in the old famous Black Dyke Mills in Bradford. One day we were checking out the old part of the mill and discovered this fantastic room with a great vaulted ceiling, it looked like an aircraft hangar and we all said this would make for a great video shoot, so that’s how that came about. Check out the stills on Melodicrock.com and you will see what we mean.

Lost Weekend have been around for a fair few years now, do you find it frustrating trying to gain support from fans and media in the melodic rock genre?

I’ve never seen it as a problem, we have many friends in the media who give us great coverage – yourself,  Melodicrock, Powerplay and Fireworks to name but a few. Hey; you write albums and put your heart in to them and then release them and hope you have captured something that other people will like! Some will, some won’t, that’s life and you just roll with the punches and enjoy it when it’s going your way. With the rise in social media sites and a chance to reach a worldwide audience we have more and more people enjoying what we do all the time and that very satisfying.

Hence why all our back catalogue will also be available on iTunes. Along with ‘Evermore’.

Do you have any live shows planned to support the release?

Yes we will be performing the new album along with some oldies. We are rehearsing now but having to take our time due to a bad hand injury to Paul Surrell.

Having seen you perform an acoustic show at Lucy’s in Hednesford recently I noticed not just how well you guys performed that evening but how strongly the Lost Weekend songs come across in an acoustic format. Do you have any plans to do anymore acoustic shows in the future? 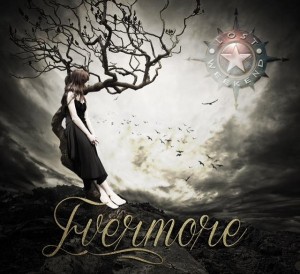 What bands or albums are you currently listening to?

To be honest I listen to everybody and anybody if it’s got melody I’m a fan, and it also depends what mood one’s in.

Is there any Lost Weekend gossip or hush hush ‘you didn’t hear this from me’ secrets you can divulge?

If I told you I would have to kill you!

Is there anything else you like to add or tell us about?

Just thank you for the interview Woody, it’s been fun and roll on 21st June we you all get to hear ‘Evermore’.