“Follow your own path and always seek new knowledge to better your state of being, for it is you who is the leader of your own fate!” 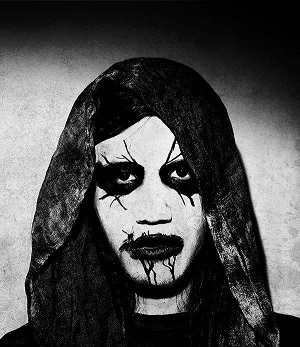 Jason: Hi Orlok. Thanks for taking time out for this interview and congratulations on Defy Deceit Destroy (Ed: Jason’s review is here). What was it that you set out to achieve with the album? Did you have a clear idea of what you wanted for this record?

Orlok: Thanks for the opportunity Jason. My vision for this album was to create a “complete band” sound in terms of instrument elaboration and variation because I sometimes feel that one-man projects are classed as little side projects and aren’t taken seriously. I didn’t have the album fully planned out right from the beginning, but I knew that I wanted to create something atmospheric, melodic yet dark and aggressive.

Orlok: About 80% of this album was re-written and adjusted constantly. The most extreme case was when I completed writing all of the guitar, bass and drum tracks for’Defy Deceit Destroy’ and when I sat down to record it, it didn’t feel right and I ended up re-writing the whole track.  Each track on this album worked as an inspiration for the next as I didn’t have all the songs written before recording. Half way through recording a track I had a vision for another and pursued it right in that moment.

Jason: Can you tell us about the significance of the album title?

Orlok: The title is meant to be read as 3 chapters:

Defy – break free from the mind control and follow your own path.

Deceit – wake up and realise the misconceptions.

Destroy – exterminate those who wish to enslave you.

Orlok: I usually have a vision of what I want to achieve overall in terms of tempo and style, but I would say for the most part that each individual song manifests as it’s being developed.

Orlok: My lyrics are always done last, so they are usually born through a melody or a riff interchangeably.

Jason: Your lyrics have strong anti-Christian themes and you argue that it is the self that should be the source of thought and action. This is a common standpoint for black metal and the works of Nietzsche and Schopenhauer amongst others are regularly cited as influences. Who are the main influences for your lyrics? And how have their works influenced your writing?

Orlok: I’d say that Friedrich Nietzsche’s thoughts on self-creation would definitely be the main influence behind my lyrics. I also read into some Gnosticism and Luciferianism, but I would say that those studies are merely influences and I don’t strictly live by those principals.  The strong anti-Christian sentiment also comes from being in a Christian school for 9 years!

Jason: Does composing by yourself provide any challenge? How do you push yourself to be creative and keep it fresh and inspiring?

Orlok: It certainly does pose a challenge which in effect is good thing because it pushes me beyond my comfort zone and forces me to learn new things. Sometimes I could be stuck trying to come up with an appropriate bass line or melody for weeks as it’s only approached from one person’s perspective. I mostly try to incorporate new techniques into my new material and this way it keeps it fresh because I push myself to use the technique to come up with something I haven’t heard before or maybe have heard before but I try to apply my take on it. The hardest challenge is always the drums because making a machine sound organic is not only time consuming but also draining on the creative ability.

Jason: What was it that drew you to black metal as a form of self-expression? What is it about black metal that you found so appealing?

Orlok: For me, Black Metal musicians don’t only care about the music, they strongly care about the entire concept or message behind it too and that’s what drew to me it. It’s an art medium that can be used to achieve something greater. I also found the mysterious and dark feeling surrounding black metal more appealing than other metal genres.

Orlok: Acherontas, Chaos Invocation, Glorior Belli and Urgehal. I’d say that the leads and solos from Acherontas’ Vamachara album had a great impact on Throne Below’s latest offering. Urgehal was a heavier influence on the earlier works.

Jason: You cite Greek, French and Swedish orthodox black metal bands as the main influences for the album. Are there any bands in particular that had a direct influence or inspirational role in the making of the album?

Orlok: As stated before – definitely Acherontas with their Vamachara album in particular. I’m still in awe of that album as it’s a masterpiece in my opinion. Leads such as those in ‘Blood Current Illumination’ definitely influenced my melody on the album. As for Glorior Belli, the mid-section of ‘Defy Deceit Destroy’ draws inspiration from their blues infusion and also the leads in ‘Dark Evocation’ took some inspiration from them. I also drew inspiration from the ideologies of those bands cited which I would rather not discuss.

Jason: You started out in 2008 and your first release was Winter Eternal, in 2009 with another release in 2011, All Heathens Rise. Your early material has an ambient/raw black metal sound whereas Defy Deceit Destroy has a more straightforward black metal sound. Why the change in approach?

Orlok: I think that my influences changed over time and my appreciation for hearing each instrument more clearly grew more intense.  The orthodox bands drew me in with the clear yet raw atmospheric sound. I shifted as I didn’t want to fall into the clichéd one-man black metal sound.

Jason: You’re from Bloemfontein, the capital city of the Free State Province in South Africa. What’s the black metal scene like there? Are there any bands that we should be aware of?

Orlok: I haven’t lived there in two years but I can tell you that there is no black metal scene there. There is one solo project I know of that released some interesting material a while back and it’s a project called Verkrag which means “rape” in Afrikaans (the second native language after English).

Jason: Has your experience of living in Bloemfontein influenced your music in anyway?

Orlok: I’d say yes in the sense that it’s a small city with a lot of closed minded people. It’s created more of an isolated aspect to my music because there aren’t any supporters there. If it doesn’t sound like the commercial Norwegian acts out there, they’re not interested. I prefer it this way and I’d rather have my music stay in the underground.

Jason: I understand that you now live in Thailand. How does this compare to living in Bloemfontein? Has it affected your music or your approach to your lyrical themes in any way?

Orlok: Metal is much more accessible in Thailand and there’s quite a large metal community here. They have two well-known black metal acts residing in Bangkok, namely Surrender of Divinity and Zygoatsis. So, there’s definitely less isolation though I wouldn’t say it has really affected my music.

Orlok: No, I don’t have any desire to make Throne Below a full band. I have other projects for that, this is my own vision. I might however try to recruit a session drummer for the next album.

Jason: I read elsewhere that you have recently revived another of your bands, Belthezar. When working with other musicians, how does it compare to working alone for Throne Below?

Orlok: Ah yes, that’s a two-man project and it has recently been revived. Well, things certainly take longer. When I have something in mind I like to get right onto it but when it’s a band, you have to wait on the other member, which is understandable but sometimes frustrating. There’s much more decision making to be made but creatively it does make things easier having two minds working together. It’s great in the sense that something more original might emanate from the collaboration.

Jason: What does the future hold for Throne Below? Is there more music in the works? Any plans for live performances?

Orlok: I hope to release a new album next year. I’ve started recording new material already but it will most likely appear on a four-way split with a Peruvian, Brazilian and Canadian band. It’s still in the process of being discussed, so I actually have no idea when that’s going to happen. I’ve also started working on a lyric video for one of the songs and I hope to complete that soon. I’m not sure about a live performance just yet, maybe I’ll explore some possibilities when I move back to South Africa in October this year.

Orlok: Thank you for the interest! Let us rise against the hypocritical religions, not with blades or guns as they do, but with words and music. Follow your own path and always seek new knowledge to better your state of being, for it is you who is the leader of your own fate!

And you can fond out more about Throne Below at these links: