We wanted to summon the Mediterranean dark spirits…

A unique evil Greek alliance including members of Varathron, Aenaon, Agnes Vein and Hail Spirit Noir, on 15 March 2015 Katavasia will deliver unto the world their debut album, Sacrilegious Testament. Here, guitarist/bassist Achilleas C. speaks to MR’s Jason Guest about the band’s formation and their intention to “remake” the Greek 90s BM sound, the occult and blasphemous inspiration for the album, the contributions of Rotting Christ’s Sakis Tolis and Septic Flesh guitarist Sotiris Vayenas, Greek BM and the threat of egos to the community…

Thanks for taking time out for this interview and congratulations on Sacrilegious Testament, an incredible piece of work.

Hi Jason. Greetings to The Midland Rocks, and thank you for your kind words.

The band features members of Varathron, Aenaon, Hail Spirit Noir and Agnes Vein so the first – and most obvious – question must be what drew you together to form Katavasia? 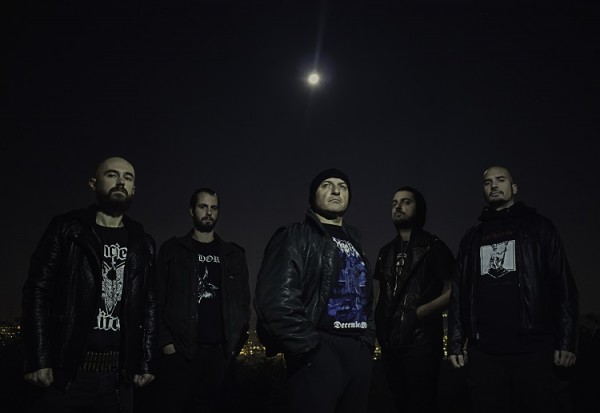 We all knew each other. I play in Varathron and Aenaon so my connection with Astrous and Necroabyssious is obvious. On the other hand, Astrous is also a designer and has already worked in the past with all of these bands. Haris from HSN has also played for the last Aenaon album most of the keyboards. Foivos from Agnes Vein is a very good friend and we have also shared with Agnes Vein the stage a couple of times. In conclusion, Katavasia was Astrous’s idea so you can easily see all the connections between those members and bands now.

Did you have an idea of what you wanted the band to sound like?

Yes, of course. We wanted to do a “remake” of the 90s Greek BM sound. We didn’t want to copy-paste the sound and the riffs but to recreate the feeling. We wanted to summon the Mediterranean dark spirits and we wanted to do it the right way because we believed that we could achieve this. You can listen many bands trying to copy/paste that sound but we knew we could keep the same feeling but adding a touch of something new too, musically speaking. When Stefan accepted to participate on this we knew we had the right man to help us focus on our target.

Why choose the name Katavasia? What does it mean? And what does the name signify for the band and its music?

Katavasia is the name of a series of hymns in the Greek Orthodox Church. The word Katavasia is connected to the word “katavasi” which means descent. When talking about a descent to the underworld the word “katavasi” is usually referring to that journey of the human soul. So, “Katavasia” is both a reference to Christianity but to the underworld too creating a blasphemous and at the same time occult feeling. Stefan’s lyrics and our music are based on this dark and apocryphal atmosphere.

We didn’t want to overwork and overanalyse anything. We do that with our main bands. This time we just wanted to let things flow without trying to complicate things. We grew up with this sound after all and technically it was very easy for us to perform this kind of music. Astrous had already written through these years many of these riffs so when we decided to finally do this project many tracks were already almost complete. It took us 2 months to put all these ideas down, add some riffs more and make the final arrangements. The recordings took about 2 more months, so overall we produced this album in just 4-5 months.

How did you approach composition for Sacrilegious Testament? Did you have an idea of what you wanted it to sound like or did you take a more organic approach?

I added some riffs and solos and helped with the arrangements but as I already said, the main composer of the band is Astrous. As you probably know he is actually a singer and not a guitarist but through all these years he always had a guitar home and played simple riffs in the early Greek BM style, he just didn’t thought he will use them one day.

It started as a need of nostalgic and romantic catharsis. Now, we see and feel that this is not just a recreation of our young memories and feelings but it is also filtered with our more musically matured personalities which is in the end a good thing. What we are proud of is that we managed to be respectful to the whole aesthetics of the Greek early 90s era. Music, lyrics, artwork and even photography.

Is there a concept, theme or ideology behind the album? If so, what are they? Where does inspiration come from? And how does it manifest itself in the music?

No there is not a specific concept. I think Katavasia lyrics are quite similar to the lyrics Stefan writes for Varathron: small stories of dark adventures inspired by obscure and occult books, blasphemous confessions and dreams from other dimensions. Stefan has delivered one more Sacrilegious Testament to the fans of the extreme sound.

There are guest vocals by Sakis Tolis (of Rotting Christ and Thou Art Lord) and a guest guitar solo by Sotiris Vayenas (of Septic Flesh). Why did you choose to work with these musicians? And what did they bring to the album?

Speaking about the most important artists of the Greek BM sound would be Rotting Christ, Necromantia and of course Varathron, the unholy trinity. On the other hand Septic Flesh were very important to the Mediterranean sound (from a more atmospheric death perspective) plus Sotiris’ solos at Varathron’s 1995 album Walpurgisnacht are unforgettable. Of course, no reason to explain why we wanted Sakis’ as a guest. He is a great man and a cornerstone of the Greek BM. Unfortunately, we didn’t manage to have The Magus too ‘cause of his tight schedule. Maybe next time!

The track ‘Mater Tenebrarum’ is sonically very different to the rest of the album. Can you tell us about this track?

Both ‘Mater Tenebrarum’ and ‘Eosforou Katavasis’ are composed based on the same idea – using bass guitars as a foundation. This idea came up both from Necromantia’s sound but from Varathron’s Walpurgisnacht atmosphere too. After building these tracks with the use of two bass guitars then Haris added the keyboards and samples creating a unique touch to both of them. These tracks create small breaks into the album’s structure. They are small journeys into dark dreamworlds.

The album has a distinctly Greek feel to it. Was this a conscious decision?

Yes of course. There is another perspective of playing black metal and not only the Scandinavian, frozen way. The Greek way is based on obscure atmospheres, occult lyrics and heavy metal, melodic riffing. That’s what Katavasia is all about. 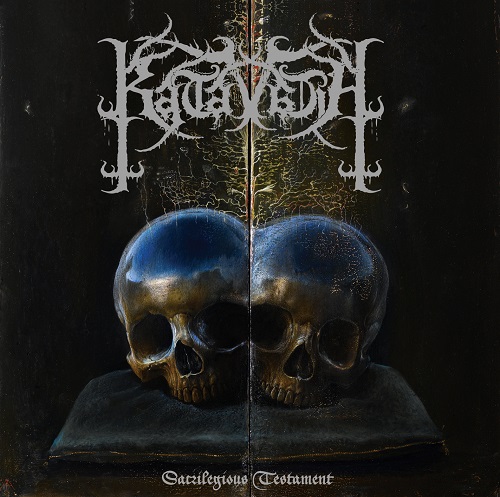 Similar to most if not all black metal band logos, the front cover design is symmetrical, the line down the centre emphasising this. What does it represent? How does it relate to the music?

The painting is created upon two pieces of ancient wood. That’s why you see a line in the middle. It also creates the feeling that you can open the painting like a gate. The simplicity and the symbolisation of the two skulls is more than enough to represent the spirit of this album.

This is a creation of Agostino Arrivabene, a very important Italian painter that was kind enough to give us our permission to use this beautiful piece which was already created. If you think about it, even the artwork has a Mediterranean feel to it. When Astrous sent us this painting we all thought that it is the right choice for the Sacrilegious Testament.

The members of Katavasia have all been involved in Greek black metal for a long time. What are the significant changes that you’ve witnessed? And how do you view them?

Well, through all these years I’ve listened to amazing releases and most importantly, a huge variety of styles among the Greek BM bands. The only thing that seems a bit strange to me is that some bands still haven’t understand the importance of supporting each other and prefer to manifest their stupidity and their fake BM elitism. I believe that the great wave of the first BM bands in Greece has been so strong because of this support in every level, production, creation and promotion. When “egos” are getting in between then every scene is going down.

It’s true. Being underground means that you have to dig, search and fight to discover the music. Nowadays the underground is still alive and many bands and fans insist on keeping this flame alive. I like those people who still support this way and attitude but I don’t like people that only care about underground gossiping and forget about the importance of music. Writing letters, tape trading and making fanzines was a necessity back in the old days, not only an attitude. For good or for worse, technology affects arts and communications and there is nothing we can do about it.

Not yet. This is a project with people that are living quite far from each other so doing rehearsals is quite difficult financially for us at the moment. Nevertheless we all want to do some live shows in the future. Me and Stefan will visit London in May with Varathron.

What would be the ideal setting for a Katavasia performance?

To be honest I haven’t thought about it yet but I guess an extreme festival with underground bands from all over the world would be awesome.

Yes, for sure. We’re thinking of doing a split next time. We all love doing 7-inch splits with bands that we like.

Thanks for reading. Keep the flame alive with passion and loyalty.