“It makes going back to work the next day a hell of a lot more bearable.”

Hi Nick. Thanks for taking time out for this interview and congratulations on Of Things Seen And Unseen; it’s a great album (reviewed here). Does the album mark a progression for the band since 2011’s Carnal Altar?

Hi Jason! Thanks for the kind words! In answer to this question, it would be fair to say yes. Having Roland join the band after Pete left was bound to have had an impact. We all feel that we have managed to retain what the band is about and also progress the sound with new ideas and perspectives.

Of Things Seen And Unseen was actually suggested by Roland. I had the thought that maybe we call the album ‘Let them Starve’ after the song. However, on reflection, it gives the impression that this album is pure hatred. It isn’t really. The title is more in keeping with what the lyrics are about.

What are the lyrical themes on the album, and where does inspiration come from?

Lyrically, the album deals with depression, the human mind and fear of losing it. Garry has drawn elements from his own personal experiences and also themes from his imagination to create the voice of the songs. I always enjoy reading lyrics and his are no exception. The best thing is that people can take what they want from it.

We had no idea on how it would turn out, and certainly no concept or preconceived ideas. It was more of a case of saying, ‘let’s just see where we go with this’. It was quite refreshing, we had just jammed and jammed on ideas and eventually they evolved into songs.

What was the writing process for the album? Was it different in any way to Carnal Altar?

Well, Carnal Altar was Pete’s baby. He had the concept and idea to make the songs the way he did. Obviously Paul’s drums and Garry’s lyrics were their own input. I just thumbed through the basslines. The guys had been jamming on songs before I joined the band, so as I learned the riffs, he brought more in and it was done before we knew it. This time around we began in the rehearsal room.

Roland had some ideas and we wrote the genus of ‘Burning Free’ within a few weeks. We even played it live a couple of times in that guise. Roland and I decided to knuckle down and write some stuff, as we were floundering a bit, having played the first album to death fulfilling gig commitments. So I would go to his, we would sit down with guitars and just hammer out riffs, often with the aid of pub visits and some bottles of Gin. We presented the ideas to Paul and Garry and often, as is his way, Paul would begin hitting the tubs immediately to find a groove. Naturally we jammed on things until they felt right. Some stuff emerged purely in the rehearsal room, while some was already thought out.

Roland also brought in new stuff on a weekly basis. It was very exciting as I managed to put some of my own riffs into the songs, and I hadn’t written any music for a long old while. To have him approving on my own ideas was a huge pleasure for me, as I am a fan of his other bands. I think we bounced ideas off each other really well and were mature enough to say if we felt things weren’t working. The whole thing was very much a communal effort between us all. That’s not to say the Carnal Altar writing process wasn’t fun, it was a very exciting time. Just executed differently. I think that we suit jamming as a band nowadays, so expect we will continue this way.

Guitarist Roland Scriver has been with the band since 2011 and makes his first recorded appearance on the new album. What did he bring to the band and how is that reflected on Of Things Seen And Unseen?

Roland is a riff machine, a very versatile and stunning guitar player. He understands what we are about and he knows his doom. He’s a very calm and patient individual too, so when we are discussing things, or working on ideas, he is always listening and thinking of how this and that can work. His brain box is always ticking! We couldn’t have asked for anything more. As a player, a person and a friend. It’s safe to say that Roland brought a new perspective and our working methods have changed as a result, as mentioned in the previous question.

Are there any influences outside of music for Serpent Venom (literature, art, etc.)? And how do they inform the lyrics and music?

I think the answer to this sort of question is always real life. Every experience shapes us as individuals, the choices we make, what is made for us etc. We share a lot of common interests with music, books, films… and I would say that the music is shaped by what we like and what we feel wanted to express.

Who designed the album’s artwork

Roland did the artwork. He originally put together the Carnal Altar cover based on what Pete wanted. He did the redesign for the Vinyl release and this time around, he painted that piece for our new record. I can’t stop looking at it when I’m at his place. He’s a very talented man. The utter, utter bastard! Haha!

How much direction did you give him in the design?

None whatsoever. He showed us photos of it as it came along and we all just thought ‘just go for it mate, do whatever you like’ and it turned out wonderfully well. He’s an artist and graphic designer, so worked hard on all aspects, from concept, design, painting, the spacing, typography and overall presentation. We’re very glad he has taken charge of that side of things, as it saved us looking around for someone else.

What does the act of creating music mean to Serpent Venom?

We’ve all been playing in bands for years and years. It’s such an enjoyable thing to do and it’s why we are still doing it. There’s not a lot better than being in a room with some of your closest friends, working towards a common goal. We enjoy the whole thing, from early ideas, to complete songs. That’s a big buzz. But then you go and play them live and that’s a mighty big buzz. Especially when we are fortunate enough to have people enjoy what we do.

I like Vinyl, tape or CD the most. When I digitised a hell of a lot of my music, I always found I was making playlists or skipping through songs. I actually made an effort to stop doing that and just listening to an album all the way through. Sure at a BBQ you just want to slam on some tunes and have fun, but on my own I like to read the lyrics, listen to the record and lose myself in the artwork and photos in the book/sleeve. It’s the way I fell in love with music and am glad I got back to doing that. I like the way that it is a little snapshot of where a band was at the time of making that record. Personally, as long as I have music in any format, I’m a happy man.

Any touring plans for the support of the album? And will we be seeing you in the Midlands?

We are in the process of figuring out a European tour in October with a fellow UK band. If it works out, we’ll be out and about causing mischief. We will happily play anywhere at any time, providing we can balance it with our commitments in real life. As for the Midlands, why not! It’s been a while.

What does the future hold for Serpent Venom? Early days I know as the album is set to be released on 27 June, but is there more music in the works?

We’ve had gigs and things to fulfil recently and a few real life goings on. Once we get back to a regular rehearsal routine we will begin writing the new record. There’s riffs and ideas already. Hopefully we can keep the momentum going and record a new album this year. Sounds a bit keen that, but it’s how we feel. We shall just have to see how it all unfolds.

Oh it’s a real pleasure. Thank you for asking! As with any final thoughts, we would all like to thank everyone who has come to a show, listened to us, put us on, put us up, helped us out, drove a van, bought a beer, tee, patch, whatever, and generally showed an interest in what we do. It has really had a profound and deep impact on us as a band, and helped us to keep on doing what we enjoy. It also goes without saying that we have been fortunate to have met some of the finest people in the known world, some amazing bands, personal heroes, played some amazing stuff and surpassed everything we would ever have hoped for. For this we are eternally thankful. It makes going back to work the next day a hell of a lot more bearable. All the best wishes to you and your readers! 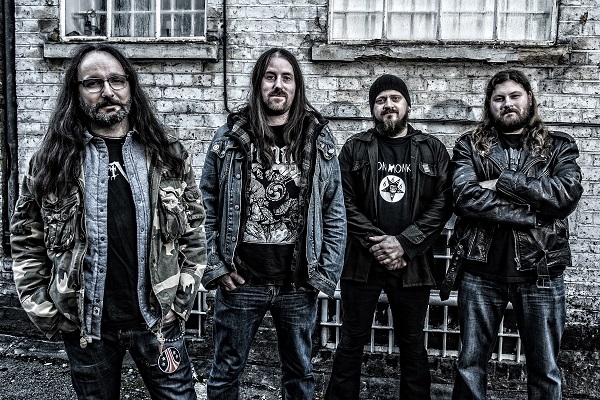