After delivering the blasphemously baptized Pissing Incest on the Virginborn­ EP in 2008, Canadian black metal duo Hostium disappeared into the darkness from whence they came. Then in 2013, drummer (and vocalist for Kafirun) Luzifaust and guitarist / vocalist Necromvermin turned to bassist Chernobog (of their other band Nordwind) to resume rehearsals and begin the work proper for their first full length album The Bloodwine of Satan released on 11 January 2016 (and reviewed here). Before they once more dissolved into the dark of the underground, Necrovermin took a little time out to talk to MR’s Jason Guest about human torches, crushing bestiality and the offering of human flesh and blood to the glory of Satan…

The Bloodwine of Satan is the band’s first release since the 2008 Pissing Incest on the Virginborn EP (listen to the title track here). Why so long between releases? What’s been happening in the Hostium camp these past eight years?

Why choose to resurrect Hostium after such a long time?

There was no occult devil worship with real conviction here. Godless North dissolved and all session musicians (Hostium) found themselves back in Satan’s grasp.

The perfect atmosphere for ultraviolence, supreme depravity and grave rituals. The soundtrack to self mutilation, sodomy, power lifting & hallucinations.

From the beginning, we wanted only the most aggressive and ominous darkness conceivable. We recorded the album using archaic analog gear to capture the chaotic nature of our music.

What are the themes across the album? And where does inspiration come from?

Who are the band’s influences? And what impact have they had on the music?

Musical influences on this record would be old Mayhem, old Darkthrone, & Mare. 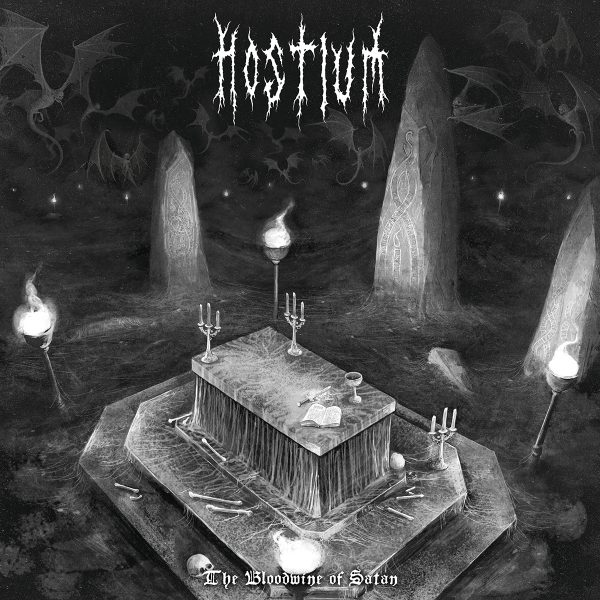 Can you tell us about the artwork for the EP and what it represents?

I dislike the artwork; the drummer (Luzifaust) hates it. Something more simple and iconic would have been better, but, it works.

Misanthropic Art is great. His layout is amazing, more direction would have helped.

Bassist Chernobog has recently joined the band. What has he brought to the band and its music?

To create the bulldozing darkness of Hostium the bass has to be very dominant. Commanding through both bass and guitar amps, Chernobog is the machine that locks down the death pulse, enabling me to scream to near black out without straying (too far) from the drums.

What does the act of creating music mean to the band?

The offering of human flesh & blood to the glory of Satan.

Are there any plans for live shows for Hostium? And if so, any visits to the UK planned?

Chernobog and I will be in Berlin with Antichrist for N.W.N. so around that time we plan to do at least one Hostium gig in Europe.

What does the future hold for Hostium? Early days, I know, as the album has just been released, but is there more material in the works? Are you planning or perhaps working on a second album?

Fucking crushing bestiality! The most brutal Hostium tracks yet are materializing on a Canadian 4x split with brothers A.M.S.G., Nuclearhammer and Svolder!

Ignite the fires of Lucifer & Ingest the bloodwine of Satan 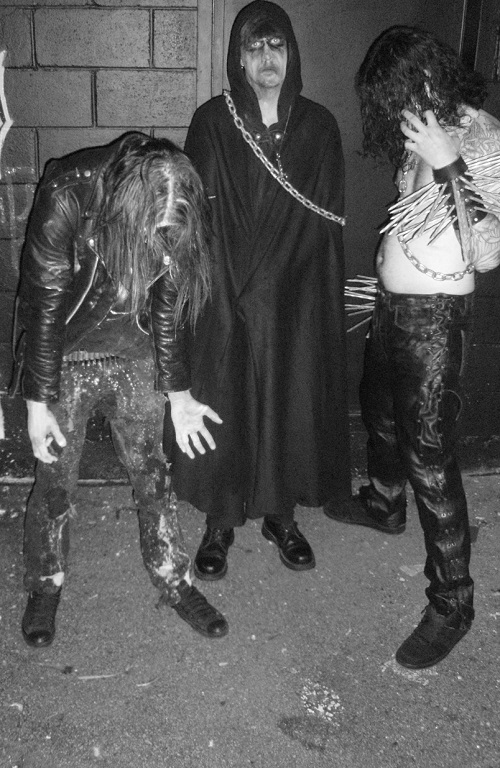