If there’s a PA and Beer, we can do it anywhere you’d like…

When Clutch decided to return to the UK this past December, once more they brought Lionize with them who did quickly winning the crowd over (and you can read the review here). Here, vocalist/guitarist Nate Bergman talks with MR’s Jason Guest about the band and their development since their formation in 2014, doing it the DIY way, and mixing rock with reggae, dub and funk…

Hi Nate. Thank you very much for taking time out for this interview. Great show in Birmingham with Clutch!

Thanks so much for the kind words and for taking the time to talk to us. We had an incredible night that show – what an honor that was.

To get our readers up to speed, can you give us a brief history of the band, how you formed and what drew you together to form Lionize?

Fairly typical story I guess. We met in middle school and high school and were drawn together by our mutual love of rock music and reggae and funk and soul – and we wanted to play parties. It kind of just made sense figuring it out from there.

Who are the band’s main influences and what impact have they had on the band?

There’s a slew of classic rock bands from the Beatles to Zeppelin and Sabbath, Thin Lizzy, Captain Beyond, CCR, Marley, Parliament. We also listen to a ton of Jazz, Bossa Nova, Nigerian Funk – the list goes on and on. Miles Davis was someone who influenced us a ton – but the real treasure for us – the two bands that have had the biggest influence on us were Clutch and Steel Pulse. We’ve been lucky enough to tour with them both and become great friends. That’s had the largest impact on the band to date.

The band formed in 2004. How has the band developed since then?

When we started out we were all over the place, heavily experimenting with Funk and Reggae and Riff Rock. The more the band toured we started to focus more heavily into the rock side of the band. We’ve always been rock band and now we lean very heavily towards a classic rock and roll sound. We’ve always been song-oriented but now we are truly focused on song and melody without concerning ourselves what genre it falls into. If it’s fun and sounds good we go for it. That’s always been the ethos of the band. Explore and have fun.

Your sound is a blend of hard rock with reggae, dub and funk. With such diverse styles in play, how do you approach composition? And how do you work to balance between them in your songs?

We don’t really think about it honestly. If the song calls for a certain feel that supports the melody and vibe – than that’s the direction we go in. We never say “Let’s write a reggae song” – it’s more trying to support the melody first. Somethings feel like they should have a dub section. Other thinks need to be funky. Most of the time it just needs to have some rock and some roll.

Your most recent releases are the two EPs Alpha and The Voyage. Why chose to release EPs instead of an album?

Cause we had just put out Jetpack Soundtrack which was a fully produced album by Machine – we wanted to branch out and experiment more and write and create some albums from start to finish. We were writing very quickly, and instead of putting out music and continuing to wait on a longer schedule, we thought it would be good for fans to get something new – quicker. Hence the two EPs in a year. They are certainly companions.

Did you have an idea of how you wanted the EPs to sound, or did they take shape as they were being developed?

They took shape as we were writing them. We never force it. We tend to see where the process takes us instead of trying to make something forced. It’s really not constructive to force things creatively. Letting them take shape is way more beneficial to how we work together.

What kind of progression do they mark for the band since 2014’s Jetpack Soundtrack?

I think Alpha and Voyage really some up the sound of the band in whole. We touch on a lot of different sounds, but it’s unmistakably us. It’s a bit heavy, funky, faster, and really – it’s the band playing, recording, mixing, mastering and doing the artwork. Every single step of the process the band did on their own. That was really empowering.

What inspires the lyrics in Lionize’s music? Is there a common theme or message behind them?

We have always been interested in Science Fiction and Comic Books – Fantasy and historical fiction. We draw a ton of inspiration just from traveling the world playing music – so there’s not really a theme. Lots of stuff to pull from lyrically. Recently we’ve become heavily influenced by the current political and social climate in an international scope.

The bio section on your website says “The Recording Industry infrastructure as we traditionally knew it has collapsed. There are an overabundance of new acts and mainstays all trying to figure out how to exist as the market place to hear music expands but the value of music, and market place shares have decreased.” How do you face these challenges and ensure that Lionize’s music gets heard (and bought)?

To us it’s always been a challenge. We never lived through the “hay day” of music industry riches. We’ve always been sort of DIY and one-fan-at-a-time. So for us – it’s always been just trying to write great songs and put on great live shows. That’s it. Just keep trying to get better and give people their money’s worth.

The band has been making fairly regular visits to the UK since 2014. With 5 albums and 3 EPs to your name, how do you set about choosing a set list for a relatively new crowd?

Well, whatever albums we are promoting will get a lot of love on the set list. But whatever feels right to that crowd, that city will be the direction we go. We take turns writing the set-list for each show, so it never gets stale for anyone in the crowd, and for us. I will also say we are over the moon about our UK fans. We love them – and they are now coming to multiple city shows – so we tend to write set lists we know won’t have them bored from night to night.

What kind of response have you seen from the UK audience during those two years?

They have grown quite nicely and the love in the UK for us is real. We will keep coming back for years to come as long as they keep coming back. It sort of feels like our second home.

Early days I know as the band have just completed the Clutch tour, but will we be seeing you back in the UK anytime soon? Maybe as headliner?

What would be the ideal setting for a Lionize performance?

If there’s a PA and Beer, we can do it anywhere you’d like.

Thank you for talking to us. We are thrilled how 2016 went, and we can’t wait until everyone gets a chance to hear the new full length we are working on. 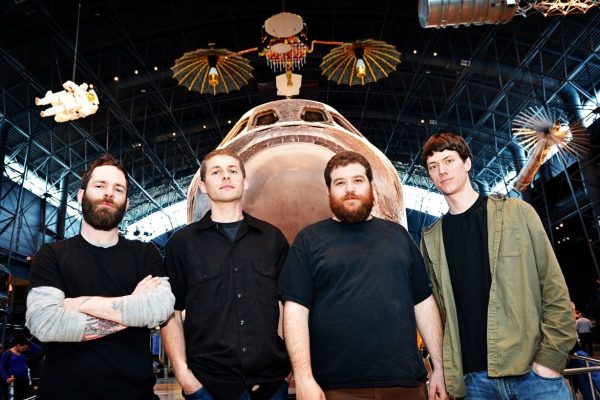