Let the flame of dark age’s burn forever in your grim hearts!

Formed in 2013, Slovakia’s Darktimes released their debut album Triumph ov Chaos independently on 31 January 2015. Here, guitarist Narakh fills MR’s Jason Guest in on a few things including their goals for their debut release, its concept, its conception and development into the first part of a trilogy, as well as the band’s formation and philosophy and why music for them is absolute freedom… 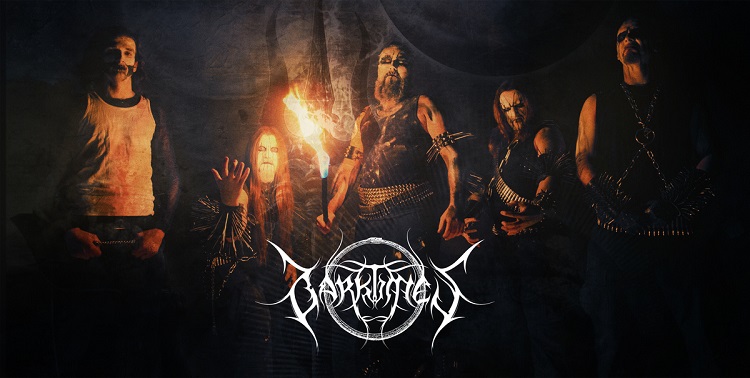 Thanks for taking time out for this interview and congratulations on Triumph ov Chaos. As it’s your debut release, what was it that you wanted to achieve with the album?

In the first place we wanted to achieve the best results musically as much as from the production part. At the moment we got the maximum we could get out of it. We wanted to express our feelings of the moment. I had always been close to music, especially metal music by which I’ve been consumed since my childhood. Music should always be a matter of feelings and least but not last a medium to spread message and freedom.

Yes, in its own way it is a concept album. Triumph Ov Chaos represents us. “Triumph” means victory and characterizes a path we have taken, the emergence of Darktimes, and the arrival of grim ages. “Chaos” is a term from Greek mythology and it has several meanings and even more definitions by the ancient Greek philosophers. To me the closest definition is that it’s a primitive shapeless matter swallowed in time which is the origin of everything. Erebus – god of the darkness, was born from “Chaos”. His darkness surrounds the edges of the world and fills its cracks. Nyx – goddess and personification of the night was his wife. “Triumph Ov Chaos” is a message (metaphor) which expresses the dominion of darkness and persistence in the world as we know it.

We are only a matter swimming in time where the true meaning of things is hidden somewhere under a hood. We do not understand; we only accept what is given to us. It is a view of the world representing depravity and the dark side of human nature. “Chaos” is omnipresent; it is the past, the present, the future. Lyrics deal with the dark side of a man which in my opinion is encoded by the basic nature of each one of us they’re about the endless possibilities of being in dark forms, about collapses and the reincarnation of matter and energy. It is also a prospect and a dark dawn. Only the second album will tell whether the prognosis will be fulfilled or not. Inspiration comes from inside.

When writing/composing, did you have an idea of how you want the tracks to sound or do they take shape as they’re being developed?

We have an idea first and after that the tune takes a shape as it’s being developed. A new song begins its life with guitar tracks. Either me or Nebbulus (guitar) will come up with some ideas which are then furthermore developed when we get together or we just come up with new material during rehearsals. We greatly enhance each other’s stuff; together the process of creation and the “chemistry” between us works perfectly. We are trying to optimally bring the needed aggression and melody into the music. During the process of music creation I always try to materialize my ideas. The result must be the music by itself, not just the image, but during our shows we also emphasize on the visuals. The finished piece of music is then more improved during rehearsals where we work on drum and bass tracks together with the rest of the band. I would say that each member contributes to every new song. When all of the music is finished we start working on the lyrics, phrasing, and vocals. The composition must be just perfect and we work on it until we all are 100% satisfied with the result. 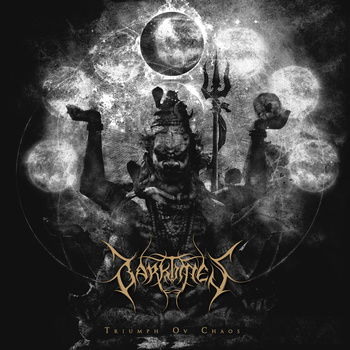 Can you tell us about the artwork? What does it represent? And how does it relate to the music?

Artwork of course corresponds with the album. It represents the dominion of “Chaos”. The destruction of the worlds engulfed in time and the arrival of dark ages. Music is closely related to the artwork and the overall concept.

The cover was fully provided by Néstor Avalos, a Mexican designer who made the cover for the latest album of Bloodbath. He also made graphical designs for bands such as Rotting Christ, Hecate Enthroned, Azarath or Vital Remains.

The album has been released independently. Have you had any label interest or do you prefer to release your material independently?

In this time of age it is difficult to independently publish a good quality CD as it is also quite expensive. We made this decision because we no longer wanted to wait with the release. We know that CD sales are low these days and publishers have a choice of way too many bands. Now is the right time to look for a possible label for the second album.

Darktimes was formed in 2013. What it was that drew you together to make music? Do you know each other from other bands? Had any or all of you played together before?

As a teenager I’ve tried several times to start a band but it always failed and it was the same for all the other members of Darktimes. We have been friends for a long time and we share the passion for music. We’ve tried to start something together in the past but it always failed because of stuff like school, work and so on. Apart from Ossa (drums) who has played in numerous local bands we all have put our instruments aside for a while until the winter of early 2013 I spoke with guitarist Nebbulus and bassist Namtar and we formed Darktimes.

As a trio we began to create our first songs with the help of a drum machine. At that time we were looking for a drummer. Roughly about a year later Ossa joined us. With his arrival we also acquired new rehearsal facilities. We have played as a four-member band and we were looking for a vocalist. The last reinforcement was Nrem, the singer. We’ve been friends with him for years so he took the microphone and our line-up was complete.

Did you have an idea of what you wanted the band to sound like?

I know that it is difficult nowadays to do a quality recording and we want to have our own distinctive sound. We are trying to work mainly on live performances to improve the musically and to compose new material for the next album. In the first place we want to make Darktimes a viable band.

Who would you say are the band’s main influences?

We do not intend to copy anyone and we do everything as we feel at the moment. But of course the Nordic scene was a part of our musical development. The most influence for us was probably the second wave of black metal in ‘90s.

It’s an act of absolute freedom. For me it defines the freedom of expression. It is an extract of dark essence of my nature and my physical self which occurs through the dark side of the modern society. It is a mirror that allows me to delve deep into dark visions. It is a flame that devours everything and a dark shadow rising from the ashes which in its nature transforms into pure energy.

It is the philosophy of free speech. The journey into the darkness and the darkest of human thoughts. It is a manifesto against all the senseless religions. A war against the war.

Internet is a modern medium without which I’m unable to imagine life anymore. Time goes forward and so does the technology. I do not think the internet has any impact on the quality of the music. Bands appear and disappear, record and create and all this would be happening even if the Internet did not exist. Internet is only a medium through which bands are able to share their music. On the other side it’s true that artists are able to upload their music online without releasing a CD and just record it in shitty quality. It is necessary to choose the music.

What does the future hold for the band? Early days I know as the album has just recently been released, but is there more music in the pipeline?

Actually, Triumph Ov Chaos is only the first part of a trilogy. At first we were basically deciding whether to create a demo or a full album. Most bands nowadays first issue an EP followed by a full length album. We wanted to do something different and since we had enough material we finally decided to directly record an album. Triumph Ov Chaos consists of six songs that we had naturally set in the overall plan. New songs that did not enter the Triumph Ov Chaos basically follow them musically but are more sophisticated, more mature so we didn’t want to include them and we decided that to add them into the second chapter and so did the idea of a trilogy arose. Everything is natural.

Yes, currently we mainly play gigs to get some visibility at home if there will be any options we will do some gigs abroad. In the fall we would like to do a small tour of Slovakia.

Thanks for the space and support at The Midlands Rocks! Let the flame of dark age’s burn forever in your grim hearts! 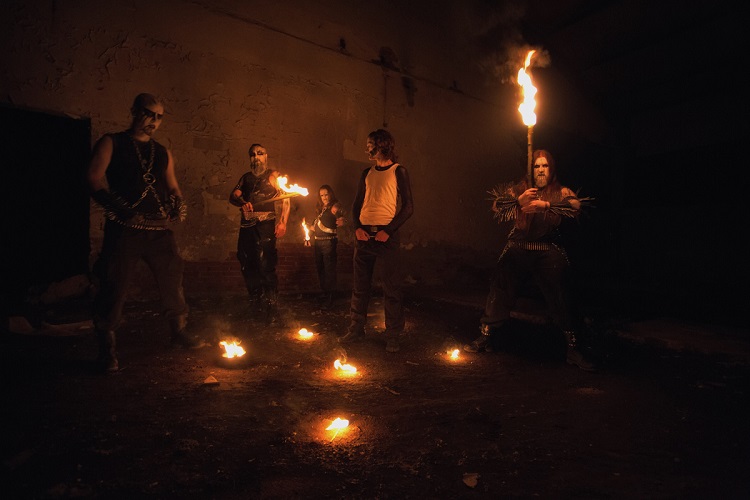