Pain be your prayer…

Formed in 2004 and with a number of demos, splits and an EP under their collective bullet belt of black metal abhorrence, the first full-length from international occult black/death metal mob Mefitic, Woes of Mortal Devotion, was unleashed on 31 May 2015 through Nuclear War Now! Productions. Here, bassist/vocalist G. gives MR’s Jason Guest an insight into the band, the album, their music, and the “perverted, tormented, anguished and asphyxiating meditation on the mortal nature of man and its meaningless woes towards an infected transcendental world”…

Thank you very much for taking time out for this interview and congratulations on Woes of Mortal Devotion, a great piece of work! So, your first full length, what was it that you wanted to achieve with it?

Hi Jason. What we wanted to achieve with Woes of Mortal Devotion is nothing more than an obscure hymn to Death. We never wanted to innovate or to bring a new breeze in the Death/Black metal scene; instead we nailed our sound and let it rot from the inside. This album should not be “enjoyed” by the listener, but rather throw him into a state of fearful and anxious trance.

Everything in Mefitic is not focused on aesthetics, but on the inspiration lying behind the music: Death. The general atmosphere and the feelings evoked in the listener are way more important and essential than the musical structure or the harmonic structure. If this sounds too abstract, think about all the bands who claim to play Black or Death metal: the major part forgives the foundation of this movement, and the results are self-explanatory.

We started working on the album with the previous EP, Columns of Subsidence, where we defined our sound, lyrical themes and imagery. For this reason two tracks (‘Grievous Subsidence’ and ‘The Swirling Columns of Staleness’) are also included in Woes of Mortal Devotion. After that, it took us another two/three years to complete the album.

It’s difficult for me to judge from the inside. We have received many comments about how our music evolved with respect to the previous releases, but I think that we continued on the path traced with the 2009 Signing the Servants of God demo and the EP. I would say that with a better production and an increased number of songs we could better reveal our ideas to the listeners.

The theme behind not only the album, but also the band itself, is a perverted, tormented, anguished and asphyxiating meditation on the mortal nature of man and its meaningless woes towards an infected transcendental world. The lyrics too are a natural continuation of the ones found on the previous releases. Going through them one can find a lot of references to the Bible, in particular the Old Testament: reminiscences of our Catholic upbringing adorned and distorted through personal meditations. I would describe these as manifestations that naturally came to our minds when composing the songs, in that exact moment when you forget about the material world and you are left alone, crawling in front of the absurdity of (y)our existence. In Mefitic you will find neither spiritual enlightenment nor any claim to convey higher knowledge, but only a torment that speaks to the lacerations in the listener’s existence. 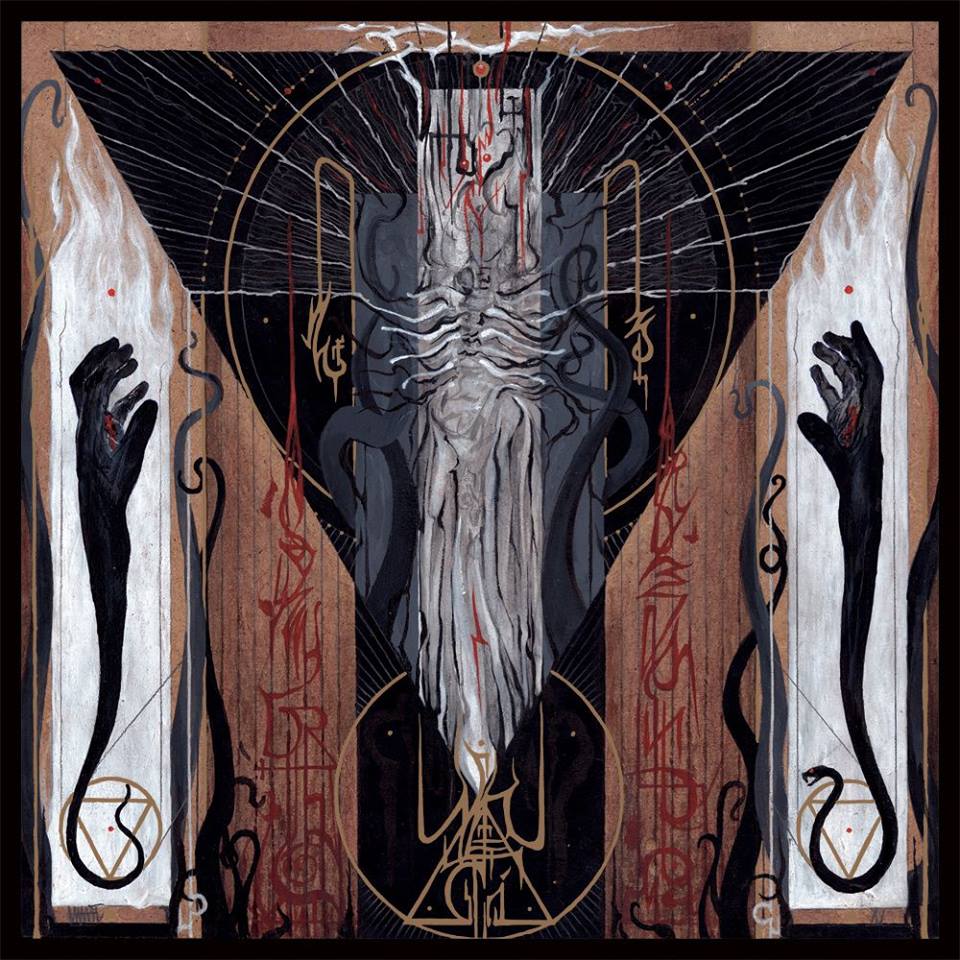 The artwork is stunning! Can you tell us about what it represents and how it relates to the music? I understand that Manuel Tinnemans (website) is the artist? Why did you choose to work with him? And how much direction was given in its design?

This question should be addressed to Manuel himself. I can only tell you a few inputs that we gave him: the figure in the centre represents the spiritual and carnal agony of the human nature, from which wounds are emanated and rays are opened. The hands convey the idea of devotion, lament and astonishment surrounding the non-revelation.

The album is being released through Nuclear War Now. Why did you choose to work with them the release of Woes of Mortal Devotion?

Slightly after the release of Columns of Subsidence, RR from Blapshemophagher sent our material to Yosuke, putting us in contact with NWN. We were and we enthusiast to work with NWN, since some of our favourite bands are also part of its roster. Moreover, the attention and dedication that Yosuke puts in each single release cannot be ignored!

I think the first releases were a bit immature, but they already contained some personal moments surrounded by the different musical influences. In my opinion, the real identity of Mefitic appeared clearly and for the first time in the 2009’s Signing the Servants of God demo-tape. With the two tracks of the EP we started working with the idea to shape the sound as we wanted it to be on the first album. Unfortunately our former drummer Anguicious decided to leave the band for personal reasons shortly after the release of 2012’s Columns of Subsidence. This brought some unavoidable delays, since we had to spend some time to find a proper drummer and to rebuild the synergy. Axor is now playing with us, and even if his approach to the drums is slightly different, but at this stage the core of Mefitic was already shaped.

How does the band write? Is there one main writer, do you collaborate…? Is there a process that the band finds works best?

Usually one of us has an idea and starts working on a song, and during this phase we avoid working too much together, in order to let the identity of the song evolve following the original idea of the composer. Once the song has grown its own identity, we work together during the rehearsals on the details. The final lyrics are usually written at the end.

What does the act of creating music mean for Mefitic?

Mefitic is born to infect the listener with the grievous feelings that were tearing our spirits apart when we composed the songs. Not everyone is receptive to its sermons, but we record and release music for those who have experienced the same feelings, even if it’s only for a consuming spark: some wounds are never healed completely, Mefitic resonates with them.

Any plans to tour in support of Woes of Mortal Devotion?

Not at the moment.

What would be the ideal setting for a Mefitic performance?

There is no real “ideal” setting. I can tell you what we particularly enjoyed in the past live exhibitions: playing with bands that shared our vision. Take as example the night in Padova when we played together with Dead Congregation, Grave Miasma and Cruciamentum. All the bands and the audience itself were tuned to the same disturbing wavelength and the performance of each band was reinforced by the general atmosphere.

What does the future hold for Mefitic? Early days I know as the album is yet to be released, but is there more music in the pipeline?

We don’t have any plans since at the moment the band members are distributed across Europe and we cannot rehearse regularly.

Pain be your prayer.