“We are all at the mercy of Mother Earth and are subject to her whims. If she decides to wipe us out there is nothing much we can do about it.”

Jason: Thanks for taking time out for this interview and congratulations on MMXIII (Ed: reviewed here). To begin, can you tell us what drew you together to form Malthusian? Did you have a collective vision of what you wanted the band to be?

Malthusian: MB and JK started the band with the aim of writing some Death Metal and seeing what would happen. This resulted in the bones of ‘Wraith/ Plague Spore’ and rough sketches for ‘The Mother’s Blade’ and ‘Hallucinogen’. All of this was then expanded upon with the addition of AC and PG to the fold. The idea grew with each song and continues to grow. The aim is to write powerful, dark, chaotic, violent, atmospheric, hallucinogenic Black Death Doom.

Jason: Musically, how has Malthusian developed since its inception? 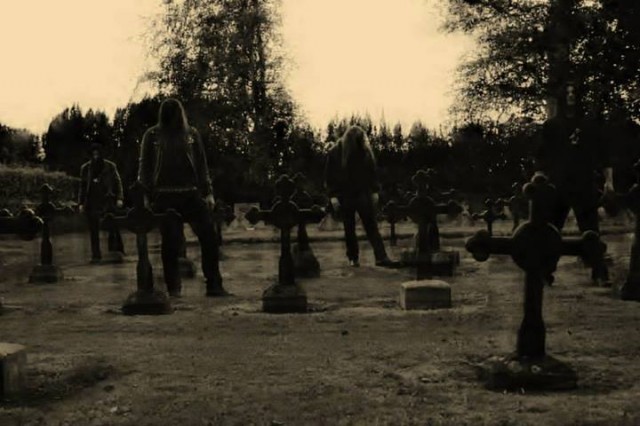 Malthusian: Adding a second guitar and bass opened up new possibilities in terms of layering and added a higher level of sophistication to the sound. It also added a lot more weight that helped to highlight the more bestial and primitive parts. The vocals were the last part of the puzzle to come together. Having three different voices again brings more possibilities to the table. We aren’t the type of band that are happy to write the same song over and over again, we are constantly striving to bring the sound further, make it both darker, more twisted and also more memorable. We are pushing to carve our own unique identity with each new song and that is what we will continue to do.

Jason: Who are the band’s influences? Are there any bands that have had a significant impact on the band?

Malthusian: We all listen to a wide variety of music. While there are many bands both old and new that we all agree on, we are not interested in mimicking anyone else. We would rather achieve our own sound and identity within the vast Death/Black Metal scene and are inspired by the spirit of other bands who have found their own means of expression. Of course there are outside influences that are detectable in our songs but we would rather let people figure it out for themselves.

Jason: Can you tell us about the band name Malthusian and what it represents for the band? (I take it it’s from Malthus’ theory of population.)

Malthusian: We stumbled across the Malthusian Theory and found that it correlated with ideas we had been playing with already. His ideas are probably more specific whereas we have a more general approach that is open to outside influences. We liked the sound and look of the word and we didn’t want to take a more typically Death or Black Metal name. We feel that the word signifies the world’s ultimate power over man. We are all at the mercy of Mother Earth and are subject to her whims. If she decides to wipe us out there is nothing much we can do about it. It is far more real and terrifying than zombies and demons.

Jason: Death metal bands draw largely on horror for their inspiration. What is it about the Malthusian catastrophe theory that you find inspiring enough to name your band after it?

Malthusian: The name absolutely captures a sense of horror. It is perhaps less explicit than many other Death Metal band names but we feel that it has a gravitas and implied darkness that fits perfectly with the horror we create with our music.

Jason: How does the band write? Do you jam ideas out together or is there one main writer? Do you have an idea of how you want the songs to sound or do they take shape as they are being developed?

Malthusian: It is usually a mix. If someone brings a riff to practice you can be sure it will be hammered in and out of shape for a while before we settle on something. The songs take their own time to come together and there is an intuitive understanding of when that point has been reached.

Jason: MMXIII blurs the lines between death, black and doom. Does this approach to genre make it more interesting creatively and from a songwriting perspective?

Malthusian: Absolutely. It was not a conscious decision to mix those three styles as the initial idea was to write Death Metal but seeing as we are all obsessive about those genres and we have all played in various different bands those elements all came together quite naturally. We didn’t fight it; we just allowed the songs to find their own shape. Once a morbid aura was present we were content to carry on.

Malthusian: The last few years has seen a resurgence in Death Metal that is less focused on technicality, which got a bit stale about a decade ago. Black and Death Metal have seemingly been reenergised lately by bands realising that what is important is the presence of that morbid atmosphere that was integral to the genres’ originators. There has been a lot of crossover between styles in recent years that has proven to be beneficial to both. Once bands have that integral piece of the puzzle in place then both Black and death Metal can be surprisingly malleable resources to work with. Once bands stop trying to find their own voice and just copy whatever is cool, that’s when it will implode on itself. 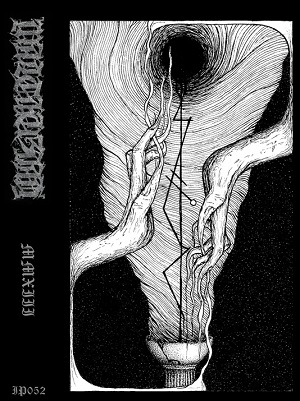 Jason: The artwork for the demo is remarkable. Who designed it? Did they have complete control over the design or did the band have a hand in its design?

Malthusian: Matt Salters from Bone Divinations Illustration designed it for us. We liked the work he did for his own band, Tome, and asked him to give it a go. He did up a rough sketch and we liked it so we left him to his own devices. The results are very pleasing.

Jason: How did you come to be involved with Invictus Productions and why did you choose to work with them?

Malthusian: We have all known Darragh for years from gigs and local forums and so on. We respected what Invictus stood for and are all fans of many of the bands he has worked with so it made sense to talk to him when we started jamming. He was interested as he knows our tastes well and after hearing some very rough rehearsals and seeing us live he was fully committed to releasing the demo. It couldn’t have worked out better.

Jason: What does the future hold for Malthusian? Is there more material in the works? An album perhaps?

Malthusian: We recorded a fourth song in the studio that will appear on a split sometime in the new year with another excellent band who will remain nameless for now. We hope to do an EP next. There are plenty of riffs and lyrics beginning to take shape but we won’t rush anything. The songs will take their own time to settle and take shape and we feel no pressure to follow the demo up anytime soon merely because people are interested in us. We would rather take our time and keep the standard as high as possible.

Jason: Will you remain with Malthus for inspiration or are there more areas you will explore?

Malthusian: We will use those ideas if they offer any more inspiration but we will not restrict ourselves to any one subject matter.

Jason: Any plans for live shows? If so, will we be seeing you in England ? (There are some promoters and venues in Birmingham that may be worth contacting)

Malthusian: We will be playing on the December 30in Dublin with Bolzer and Zom but we have no other plans. We will accept any offers to play that look interesting to us so we are very likely to play in England next year.

Jason: Which do you prefer and why: Cassette, Vinyl, CD, or digital?

Malthusian: Every format has its purpose.

Jason: Again, thanks for taking time out for this interview. Do you have any closing words for our readers? 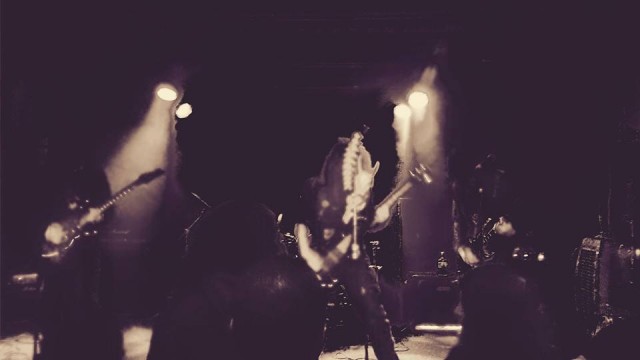