Formed in 2013 Tokyo Thrashers HELL FREEZES OVER have finally unleashed their debut album Hellraiser (via Spiritual Beast). The band have been whipping up a frenzy in the thrash community with their frenetic sound so Peter Dennis decided it was high time to speak to lead guitarist Ryoto and manager Takumi.

Please introduce yourselves. How did the band meet? How did you choose the band name?

Ryoto: After graduation from high school I kept going to Tokyo to form a real metal band.

Then, I was made an audition with more than 50 potential members, but most of them didn’t make it. I knew, at that moment of facing them, that they weren’t going to be the guys for band. So I didn’t have to go to the studio with most of them. But guitarist Hirotomo and bassist Takuya were not like the rest of them. I remember the first time I met them, I knew from the moment I saw them that I wanted them to join to the band. So they joined, and then we got a singer (Treble “Gainer” Aidysho) and a drummer (Tom Leaper). By the way, our first drummer is our current manager, Takumi.

It’s not like our band’s name was borrowed from my favourite Eagles album. People tell me so a lot. It was taken from the original title of Metallica’s ‘Call of Ktulu’, ‘When Hell Freezes Over’. I took the word ‘when’ out of it to mean ‘we can do the impossible’. HELL FREEZES OVER was formed on March 11, 2013. But Takumi quit the band about a year and a half later. Then we found a new drummer and signed with a record company, Spiritual Beast Records. That was our first professional recording experience. But it wasn’t working so we stopped recording. We thought maybe recording would be easier. So we went back to the city and had a lot of practice and discussion. Six months later we started recording again. But the drummer was making the same mistakes again. So I fired him. The owner of our record company called the former drummer of a famous Japanese metal band, Anthem, and we were able to finish the recording. Finally, the release schedule for our debut EP [Speed Metal Assault] was being set, but this time the vocalist said he was quitting. He told me that he was tired of being in a band and wanted to live with his family. We were in despair after a while without a drummer and a vocalist, because nothing was working. But we didn’t give up. We were desperate to find a vocalist and a drummer in the underground. We finally found Gainer and Tom. The first time I heard Gainer sing, I was struck by a bolt of lightning. The first time I heard Tom’s drumming I was amazed at how heavy and groovy he was, and he had hardly ever played metal before. That’s how HELL FREEZES OVER became what it is today.

You look too young to have been part of the original thrash movement. What was your introduction to thrash metal? What was it that caught your imagination?

Ryoto: I think I first heard thrash metal when I was in the eighth grade. A friend of mine who lived in my neighbourhood introduced me to a lot of different music. He was already listening to Annihilator by then and I started listening to Metallica. But I didn’t get into it at the time. But when I was in high school, I started listening to thrash metal again and I was hooked. I listened to many bands, watched videos and bought books about thrash metal. I like hardcore punk and NWOBHM, so it was a natural direction for me. I listened to a lot of 70’s Rock and was blown away by the power and violence of thrash metal. It blew a lot of pent-up frustration out of me.

Ryoto: I’ve been influenced by classic rock, early thrash metal, NWOBHM, punk and hardcore, blues and jazz, and classical music. I love all kinds of music. There’s no end to the bands I love although there is some music I hate. [laughs]

It’s been 7 years since the band’s formation and your debut album. Why so long?

Ryoto: We’ve been going through a lot of difficulties. It’s not easy to be a serious metal player. It’s hard to find people in Japan who really want to do what I want to do. And I don’t want to compromise. That’s why it took us so long to find the guys. And at the right point every time, the other members couldn’t take it anymore and left the band.

What was your reasoning for recording on analogue equipment? What was it like working with such an old technology?

Ryoto: We usually use 70’s and 80’s equipment, but the reason for recording on analogue tape is that we wanted to capture the “atmosphere” of the scene in a nutshell. You know how different it is to use digital or film with a camera? Digital is very clear and can be redone over and over again in detail. But that’s not the case with tape. On this album, we recorded the backing tracks recorded live off the floor. We played every single song with a lot of tension and enthusiasm. Strictly speaking, there are some mistakes, but it’s very human, isn’t it? I don’t see much humanity in music these days, or in everything. I think people focus so much on the convenience of things, that they miss out on something else that’s important. I think the beauty of tape is that it’s a nice blend of sounds. With digital recording, the sound is too clear and separate. I think the analogue recording allowed us to capture our mood and feelings on this album.

Similarly, you use musical equipment from the ‘80s. How easy are they to source? How do they shape your sound?

Ryoto: We didn’t care about the age of the equipment in the early days either. But as the bands image and direction became clearer, we naturally added more vintage equipment to the band. Modern equipment is so much more useful than the vintage stuff, it’s amazing. Our Marshall amps don’t have any channels, and we had to retrofit the master volume afterwards. But they sound like they’re going to get hit by a strong block. I don’t think any modern equipment can perfectly duplicate that. It’s a unique sound and I feel like it’s a “real sound”. 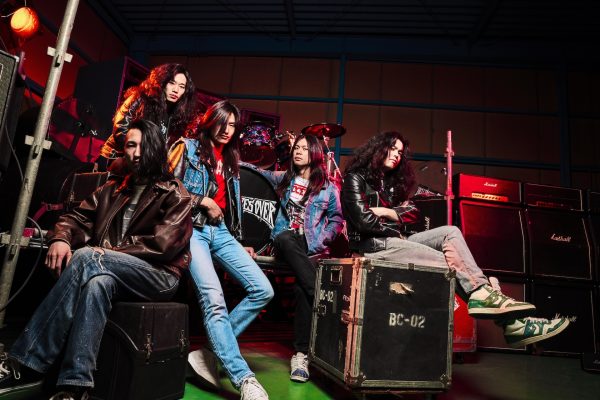 Can you tell me about writing the album? From where do you get musical ideas and what do you use for lyrical inspiration?

Ryoto: I write all the lyrics and music for all our songs. The ideas for the songs and lyrics come to me all of a sudden in different situations. It’s like a melody or a riff that just starts playing in my head. Ever since I was a kid I’ve been a person who thinks about things too much. I’m philosophical and I question everything in a way. I hate being oppressed and I hate seeing people give up on life. I don’t fit in, and every time I’ve said what I thought was the right thing to say, I’ve been rejected by the people around me. It’s all a series of painful events that can go wrong in life. But from those experiences and thoughts, all of a sudden an idea comes to me. I’ve known a lot of people, but I’ve been alone for a long time, so I’ve had a lot of time to think about a lot of things. [laughs]

Are you happy with the album now it is released? Anything you’d change?

Ryoto: I’m happy with it. It was a lot of challenges, and best of all, it was great, right?

But it’s not perfect. I don’t want you to misunderstand what I’m saying, it doesn’t mean it’s not good. There are a lot of things I want to fix or arrange differently. But there’s no perfection in art, and the imperfections are part of this work. If we fix one thing, we’ll see other imperfections. There’s no end to that, you know?

With the Coronavirus restrictions how will you promote the album?

Takumi: In this situation, it is really tough and hard for an independent band such as us to promote. To expand our name and music to worldwide, we aggressively challenged the status quo to release the album on streaming service such as Spotify, Apple Music, Amazon Music and so on. Of course our label put some advertisements in the media, and some magazines gave us the opportunity to be interviewed. Hereafter, we will issue the LP on vinyl via Sleaszy Rider Records in Greece. Then our international promotion will begin strongly. As for domestically, we are still having some live shows in Japan, even in these circumstances. As you’d guess over a half of the number of shows we planned, including Canada and Netherlands, have been cancelled due to Covid-19. However, our ROAD TO HELL TOUR started in August and will end on December 26th.

Do you have any plans to tour Europe next year?

Takumi: In 2021, we are planning to go Heavy Metal Maniacs Festival in the Netherlands.

However, we are not sure it can be held in these circumstances. If it goes ahead, we want to tour over Europe at that time.

Thanks so much for your time.