In between Chronicling Eternal Darkness and reviewing all things dark, doomy, and devastating – on CD as well as on stage – MR’s Paul Castles manages to squeeze in interviews too. Here, he chats with Justin Wood, drummer for Stoner/Psych/Doom Rock quartet Brimstone Coven about their new album, the band’s influences and side-projects, and why bringing up baby is scarier than any haunting or paranormal experience you may have encountered…

Hi Justin, can you tell me something about the new album (reviewed here) and the positive way in which it’s been received?

Well, the new album is actually a re-release of our debut EP and our first full length. We as a band have always believed in the material. It does seem to be getting a lot of positive feedback and that makes it all the better. We come at it from the approach of crafting and fine tuning the material to something we like personally and when it strikes a chord, no pun intended, with a wide audience well that is just the icing on the cake.

Did the overall production and studio time go to plan?

Absolutely. As an independent it can be a slow process to building your audience. Metal Blade has worked with some of the largest and best names in the industry and being associated with them is still sinking in for us all. This is still a brand new partnership and we are very excited to let this grow and Metal Blade definitely helps get our name and music out to a worldwide audience.

If we were to talk about influences are there any reference points you could offer – perhaps Pentagram for one?

Being a band of four individuals it is hard to speak for the other guys. Of course bands like Pentagram, Black Sabbath, Led Zeppelin etc. Not to speak out of turn but I know Corey loves the band Witchcraft. My musical influences are all over the place. I would go as far as to say all of ours are. We are all multi- instrumentalists that love to write and play several genres of music. Corey is the main song write in this band though and for this band I would imagine he channels not only the obvious influences but also draws from some places that may surprise some people. 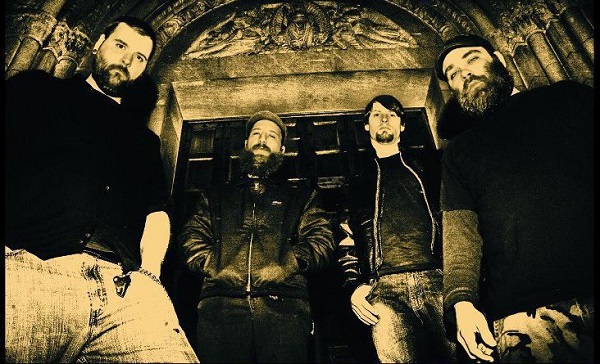 I know you guys come from Wheeling, West Virginia. That’s not a place familiar to many of us in the UK. What kind of place is it and what’s the music scene like?

Wheeling. I like it here. There are some talented musicians and artists floating around. It is a once booming, once industrial, now kind of just… I don’t know how to describe it I guess. A small town but nice here. Some people would disagree but I guess you will have that anywhere. We have a solid group of friends and bands and artists that we support and would stand behind their work just as they have stood behind ours.

Where do the Brimstone Coven cultural reference points come from?

The Devil, and beer… Really though like most people into rock and metal we like crazy stuff. Sometimes it influences us in our art visually and musically. Maybe like a slight fascination with dark and non-traditional things. Like the devil… and beer.

As with a lot of bands that fall somewhere around the doom genre, the occult figures in much of the material. Is this a subject you have looked into with any depth?

Me personally, no. I enjoy the rocking and the rolling and I enjoy the subject matter. I think the other guys may have some different insight though. I can’t really speak for them on it.

In like a haunting, paranormal experience kind of way? Not me. Nothing that stands out. One time I made a baby with my wife and the baby was totally reliant on us to keep it alive. That was scary.

Any particular films and books have inspired you?

I do not contribute to the lyrical themes in this band so I may not be the best person to answer this. Faust is one movie in particular that I know we have a song based off of. It is a movie from 1926 I think. An oldie about God and Satan vying for the soul of a man named Faust. It is a pretty creepy flick.

Are any of the members involved in any side projects or is it 100% Brimstone Coven at the moment?

We all have our hands in other things to a certain degree. Andrew (D’Cagna, bass) is a super talented singer and songwriter. I would hate to leave out some of the projects he is involved with… Nechochwen which is kind of like a Native American black metal project he does with another local cat, Aaron Carey, who is also super talented. Corey (Roth, guitar) is super versatile and is always prone to jamming in something else for the sake of fun but right now I think he is so entrenched in Brimstone Coven and just spewing out amazing material. Every week I feel like he has two new songs for us to jam on. John and I have a project we are working on the side as well. It is a power metalish kind of thing, Necromancing The Stone. It is a good outlet for my guitar playing. Brimstone Coven is special to us all and we are excited to work at growing the name and our music but I think we all enjoy having other outlets as musicians as well.

The album’s cover artwork by Creighton Hill is really eye-catching. How did you meet up with him?

Creighton sings in a band locally, What Great Fangs, and he is just a guy that we all know from around town. He always has come to shows that we were involved in and we would go to his. A super cool dude, amazing talent and good friend of the band. Check out anything that guy puts his name on.

What does the remainder of the year have to offer Brimstone Coven? Tours?

The rest of the year we are going to continue to work on our rocking and rolling. Getting the next album’s material ready. We have a couple of shows booked but no tours yet. We would like to do maybe a small run of shows but it may be too late to get that set up and promoted properly. We will see. Other than that we have some weekend shows booked around here or there. Stay tuned.

Thanks for your time. The album’s great, best of luck with everything for the rest of the year. Any closing words for our readers?

Thanks for the interview and thanks for reading readers. Cheers!