Thank you very much for taking time out for this interview and congratulations on Revelations in Alchemy (reviewed here). To get us up to speed, can you give us a brief history of the band and what it was that drew you together to form Shroud of the Heretic?

The band had already formed before I joined, and now has a drastically different line-up than at the time. Presently, Thom is the only remaining founder of the band, although there is a general feeling that earlier incarnations have been stepping stones toward our current line-up, and we are finally operating as a complete collective.

Shroud of the Heretic have been making music since 2011. How has the band developed since its inception?

Since its inception, Shroud of the Heretic has seen line-up changes, a demo and full length, and many performances. We’ve changed practice spaces three times, and have persevered through it. Currently, the band is much different in sound and substance since the days of [2012 EP] Boiled to Death. We’re discovering and developing a sound that is unique to ourselves, but still in its early stages.

Who are the band’s main influences, musically and otherwise? And how do they influence the music and the creative process?

Our influences are diverse and expand beyond just other bands. I’d prefer not to simply list of the usual cast of bands.

Can you tell us about the band name, where it came from, and what it signifies for the band?

Shroud of the Heretic is the aural experience of the band itself. Heresy is common current in our lyrics and imagery. It just fits.

Revelations in Alchemy is an amazing piece of work. What was it that you wanted to achieve with the album?

We don’t initially have clear intentions beyond simply making an album and putting it on a physical format. What was achieved on Revelations… was a shared compulsion to create and destroy. We’re driven by unknown sources.

When writing for Revelations in Alchemy, did you have an idea of how you want the songs to sound or did each of the tracks and the album take shape as they were being developed?

Our song-writing process is fairly stream of consciousness. We work in a linear fashion, and write in a rehearsal setting, which allows us to experiment with ideas at our whim. There was never any pre-conceived notion about what the material would be. It manifested itself.

The album title is just a descriptor for the visual and aural aspects of the album. It’s a versatile phrase, and can and does mean different things.

What are the lyrical themes on the album and what inspires them?

Thom writes all the lyrics and comes up with the intellectual aspect of the band. I don’t personally have a thorough understanding of its complexities.

Is there a theme, concept, or a philosophy that underpins your music and Revelations in Alchemy?

To me, the title track is the strongest piece and is a glimpse into the direction that we continue toward. Although, as with the majority of recorded albums, it is intended to be taken from start to finish, with individual songs representing movements in a complete body of music. 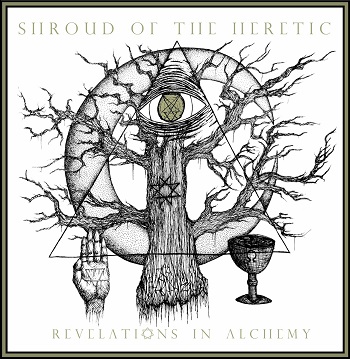 The artwork for the album is very interesting. How does it relate to the music?

From the time we began hearing the material come about, we knew right away that we needed visuals that sidestepped traditional death metal motifs and design.

Who designed the artwork? Did they have complete control over the design or did the band give guidelines of what you wanted?

I drew the album cover and did the layout. We had conversation as a band about what we wanted the visual representation of the music to be, and I went from there.

Artistic expression is clearly more important to the band than commercial success. How important is this to music? What does the act of creating music mean to Shroud of the Heretic?

The art of writing and performing is no means to an end. It is the end, itself. The only reason we make music is for the sake of it. We’re compelled.

Why did you choose to work with Blood Harvest for the release of Revelations in Alchemy?

Blood Harvest approached us. Rodrigo is a great person, and did an incredible job on the release, and we have a lot of respect for the label’s releases and roster. We’re honoured that he chose to work with us.

I prefer a combination of vinyl and digital files. Analogue format provides the best listening experience, and vinyl is more appealing than cassette. That’s how I generally choose to listen to music at home. But LPs are not conducive to mobile listening; so having portable devices that can store hundreds of albums is invaluable. I wish that type of technology was around when I was a kid, lugging a giant CD binder around with me.

What does the future hold for Shroud of the Heretic? Is there more material in the works?

We are already working on new material and currently have a small string of shows lined up.

Any plans for live shows? If so, will we be seeing you in the UK?

Only local stuff currently. We’d love to come to Europe, but we are all working and/or studying full time and don’t have the funds for an international trip.

Cheers! Thanks for the support, Jason!