Peter Keevil hooks up with Monster Truck frontman, Jon Harvey prior to their recent show in Birmingham.

Welcome to sunny Birmingham, you’ve had a day off yesterday?

Yeah, we’ve had a chilled day, have eaten, had a few pints.

Do you get a chance to take in the sights of Birmingham?

No not really, I wanted to go to the Aquarium but didn’t get around to it.

What?! You are in land-locked Birmingham and you want to go to the Aquarium, Don’t you live beside a lake the size of the North Sea?

Yes, that’s true. You can fit a LOT in that Lake.

So, welcome back to the UK, you were last here in October with Vista Chino. Is the UK a ‘territory’ you feel is important to Monster Truck?

Oh Yeah. Personally, I like coming here as my family are from Southampton. My father was born here, so for me its great, plus the UK crowds are better than in the US.

Oh really? In what way?

Everyone is just a little more excited about rock r roll in the UK. I think in America its got so watered down that people have just moved on. But here, there’s still a hunger for good rock n roll. There aren’t too many places like this in the world with that demand anymore. Germany, UK, Brazil, perhaps Scandinavia.

And it’s so much better to tour Europe, everything is just so much closer together. In Canada we have to drive 14 hours to the next show. Here we can play Nottingham and then just a short drive is the next gig.

So, you are still touring Furiosity. Does that still have legs for you?

Yeah, it’s going good. We just released our third single in Canada and our second here and picking up airplay with Team Rock. We were in Classic Rock magazine and we were like YEAHHHH! So I bought a copy for my Dad.

Does it still give you a buzz seeing yourself in magazines?

Yeah, of course. Its great buying the magazine off the shelf instead of it being sent to you, is really cool. Any experience you get to do that a typical person doesn’t get to do you’ve got to value it. When you hang back stage after a show that’s cool. Who gets to do that? Like a big festivals, you get to hang backstage with lots a great people, so I cherish all of these moments. I love it!

Do you look back at the album and critique it, do you play back your own stuff or just park it as a snapshot in time?

Well, you hear it enough. Our home town radio will like play it every hour on the hour, so we hear stuff a lot. And then you make videos and have the playback a lot again. So you do kinda get ‘forced’ to hear it so you don’t need to listen for leisure or anything. It’s part of our world.

There’s a few things I’d like to do differently sonically but we’re proud of it. It’s a solid debut.

Yes, it is a debut isn’t it? Back in 2011 you had The Brown EP and that had a few hits on hit and kick started MT’s career. Had you experienced anything like this before, that sort of chart success?

I hadn’t experienced it before. Some of the guys had and had been nominated for awards but I was like ‘Oh My God we’re in the charts!!’ and they were ‘…yeah whatever…’ (laughs). I get excited but what does this type of success actually mean? We have to put that aside and just focus on the songs. But yeah its cool. Its great to enjoy for the moment.

So that gave you the impetus for the album. Did you approach that in the same way?

Well kinda, but we knew we had more room musically. You don’t produce an album that’s 100mph all the way, so can play with that space and develop a journey, and a story, for the want of a better word.

And does it need to be consumed as a complete work?… Because that’s difficult nowadays, people dipping in and out of individual tracks or singles, they often don’t get to (or seek out) the whole album.

Hey, that’s cool. Whatever way people choose to listen to us is fine with me. I’d prefer they listed to the whole thing to understand the complete story. 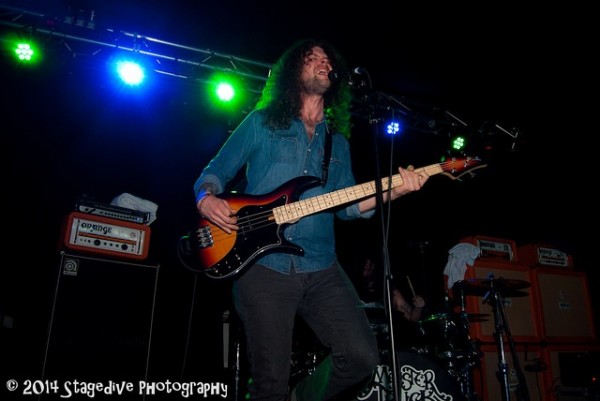 Do you think the ‘album’ as a format, is still viable in this day?

Oh yeah, I think so. I enjoy them. I prefer the ‘album’ as the complete picture. I mean, how many times can you hear a single and it doesn’t represent the complete breadth of the band? The rest of the album doesn’t sound like that single. I’m not a ‘single’ guy. I’m an ‘album’ guy.

Having said that, if we play a show we WILL play the singles off the record, why wouldn’t we? That’s why people are going to your show. We like ALL of our songs, including those singles. So it’s no problem. Plus when you play a song that many times, we actually get these right!! (laughs)

When you play live, so you stick with the same set or mix it up?

Oh yeah, we mix it up. We do it different each day, its better like that. We take it in turns to come up with the set list. It’s like making a mix-tape. It keeps it fresh.

We get an hour on this tour, so it’s a good length for people to get what we are about.

What are you up to after this tour?

We do a few dates in Germany and then fly back to the States to start a tour with Alter Bridge. And then straight after that we start 3 weeks with Alice In Chains, home for a week and then start the festivals.

Yeah, do the laundry, kiss the girlfriend, then right back out. The summer will be good as it’s quite broken up, we’ll be home in-between quite a bit.

How do you guys pick up a tour with the likes of Alter Bridge?

We are really lucky man. We did a tour of Canada with Slash, Myles sings with Slash and Alter Bridge and we get to know them. We then get submitted for the American, AB tour and have a connection. Similar with AIC, we toured together in Canada and now we pick up in the States. So it’s being in the right place in the right time.

Can you pick up that size of tour in Europe?

I don’t know. We co-headline this small venue tour and then see what happens. You can’t really make plans in this game. One day you can be without any offer, the next a huge offer may come knocking. We love coming over here to tour ‘cos its awesome. If we get offered tours, we take ‘em. We’ve been over here twice which is great.

How long can you tour this album before the next?

Oh, we are already writing it, man. We’ll continue through the festival season and enter the studio over winter with a release planned for the spring. We may do some covers and release those, we’ll see.

Awww man, those are like my two favourite things in the world.

I can’t decide between those two… I’ve gotta go with Eric (MT Producer) or I’ll be in trouble.

I like BIG supports. I canb nick their fans and use their road-crew!

Ice Hockey or JD with ice?

Awesome, thanks for your time. It’s been good fun.