“We have so much more control and much less drama in our lives.”

Hi JP and thanks for spending time in your busy schedule to talk to Midlands Rocks ahead of the gig here at the O2 Academy in Birmingham.

Earth Rocker – what can I say?  It’s an amazing album.  Your musical style has evolved over the last 15 years or so and Earth Rocker is possibly a step in a heavier direction. Did that come about naturally?

No, it was a calculated effort.  We saw that there was a lack of straight up rock n roll records out there in the States and we also toured with two very influential bands, Motorhead and Thin Lizzy.  Touring with those bands was a lot of fun obviously, they are bands that we grew up with but it was actually very educational as well.  It was quite an experience to watch those bands play and the collection of songs that these bands had, it was like hit after hit after hit. So it was great, we learned a lot from them and their influence on Earth Rocker is pretty obvious I think.

Yeah, it does sound really good.  How’s the song writing process with you guy? Are you ready to start another album or is it an ongoing thing, as and when ideas happen?

The song writing process is very fluid for us, it’s very organic in that there is no set way for a song to start.  It might start with just one particular riff.  A lot of the times Neil has some vocal ideas that go over maybe two parts and then we just get together and play, it’s something that takes time, the songs don’t come together in one day and they usually take a few writing sessions. We are also very good about not playing these new ideas to death.  We usually work on them a little bit, get to a point where we feel like we have made some accomplishments with the songs, put it down and then move on to something else.  So we try not to beat it up too much as we say.

Where did you get the idea for the album cover of Earth Rocker?

That was very much Neil’s idea.  Neil has a lot to do with the visual side of the band and he is an amazing artist and probably better than he gives himself credit for.  He has a lot to do with the way the packaging comes together and in this particular instance there was an image that was on a building in Detroit.  Detroit has some wonderful architecture from the 30s, 40s and 50s and some of it is kinda Art Deco and some a little bit more modern but there is a particular building that had native American faces carved in stone which wrapped around the outside the building.  He saw that and from that made a sketch and that was really the impetus behind the whole thing.

You are currently on a UK/Ireland tour with a few European dates thrown in for a good mix.  How has the tour been received so far?

Great, it’s been a while since we’ve been over here headlining and it’s a lot of fun to play some of these towns.  We very much like coming to the UK so it’s a lot fun, today was great and I even saw the sun for a minute so that was kinda nice.

And after Europe, you are back on home turf.

Yeah, we will be home for a few months over the Summer. We don’t sit around too much though and we will be writing most of that time.  We’ve already started the writing process and we have a good chunk of an album already in the mix and I think we will continue to do that throughout the year. The touring cycle is not as extensive as it was last year and we have built in time in the schedule because for us, it is difficult to write on the road so we really need to make an effort to carve time out so that we can think creatively and not worry about having to soundcheck or make a set list.

So have any funny things happened on tour which you care to share?

Hey, every day is a funny day!   A very good friend of ours, Dave Brockie, just passed away and he said something funny during an interview one time when he was asked “what’s the craziest thing that happened on tour?” and Dave had the best response and that was the craziest that will ever happen on tour is the day when nothing goes wrong.  Inevitably something is gonna happen, whether you have trouble getting to the gig, something will happen in soundcheck or even someone throwing a shoe on stage or a beer at the drum kit. You know, crazy stuff happens all the time and funny stuff happens all the time.  It’s when those things are not happening that things become a little weird for us!

And you chose Lionize to support you?

We did.  We’re very proud of those guys.  They are great because they have a very unique sound.  They play music for themselves and I see a lot of ourselves in them. They work very hard too that’s the other part of it.  So many bands out there are unwilling to just get in the van and play gigs. You have to play every gig.  There is no such thing as a bad tour, you have to go do every tour out there.  Those guys are very aware of that, they have a great work ethic and you couple that with great music, they are a band we are very proud to work with on that level.

Your new label… Weathermaker Music… how did that come about?

It was the next obvious step.  We had finished our agreement with DRT, our last label, and the writing was on the wall for us, we realised that there was no way we could sign to another label and at that point we had been on just about every label there is, major or otherwise, and I think we had the resources to do it.  Most importantly though, I think the industry was ready for something like this.  We tried to do something like Weathermaker many many years ago, probably 10-12 years ago and the industry wasn’t ready for it.  It was difficult to get people to take us seriously as far as people wanting to distribute our albums.  It was difficult to find somebody who could run the label but all that has changed.  The music industry is upside down from what it used to be. So the time was right and we’re very happy that we did it.  It has been a learning experience and we continue to learn but along the way it’s been a lot of fun and it’s great to put that kinda energy into something which creative as making your own record label.  Much better than dealing with a label that is disagreeable as to when you’re gonna record an album or when you should tour.  We have so much more control and much less drama in our lives.  We like that a lot.

I have a 3 part drumming question for you now … who are your influences? How did you come up with the intro drums on Crucial Velocity? And you play a lot of shuffles, who do you watch to get your shuffles down?

Influences, yeah, I very much listened to the classics so for me they are jazz rock guys like Ginger Baker, Bill Ward, Mitch Mitchell and Buddy Miles.  Those were the guys that I really sorta cut my teeth on learning to play drums. What was interesting for me about those guys is that although they were playing in bands that were very loud and they played with a great deal of authority, their playing came very much from a traditional drumming background and so for me that means jazz.  After listening to Ginger Baker and Mitch Mitchell, I had a better understanding of what it was and what Alvin Jones did, I had a better understanding of Billy Joe Jones, Buddy Rich, Art Blakey, so I am very much into those classic sort of drummers.  For me the drums is an interesting instrument because it is a jazz instrument and although people have been playing drums since the beginning of time, the idea of a drum kit like we have here, that happened when jazz happened and the two are very much related. So as jazz developed the vocabulary of jazz drumming developed. It’s pretty amazing the repertoire that these guys were able to develop in a very short amount of time so I have a tremendous amount of respect for them.  I still listen to Alvin Jones, Billy Joe Jones and Tony Williams.

The intro on Crucial Velocity actually came from a practice routine I was working on and this kinda goes back to what we were talking about earlier on how songs come together and that there is no set way.  So in this particular instance, this was just an exercise that I was working on in the morning before the guys came over to practice and for me the challenge is to try and take these exercises that re more drumistic than they are musical, and take these drum ideas and make them musical and put them in a musical setting and so that just came from a practice routine.  To be very specific I was practising playing 16ths on the bass drum and working through my favourite drum book called “Syncopation” and applying some of these rhythms out of Syncopation to this sort of rule that I created for myself and so that’s how the intro started.

For shuffles it’s Johnny Vidacovich.  Johnny is a New Orleans drummer who I have had the opportunity to play with, hang out with, study with and I have seen him play numerous times. He impresses me so much because of his musicality, it’s not about the chops, it’s not about playing drumistic things, it’s about playing musical things.  In one of the musical things he does best and better than anybody, is play a shuffle. So on more than one occasion I have picked his brains about shuffling and it’s pretty great.

Another great shuffler that we saw just recently was Brian Downey from Thin Lizzy and it was amazing to watch him.  He is another guy you can watch who has a tremendous amount of feel and he plays with a very loud band but if you analyse what he plays, it’s very rooted in the jazz tradition.  I have a tremendous amount of respect for Brian Downey.

Jean-Paul, it was an absolute pleasure and thanks so much for taking time to speak to Midlands Rocks. 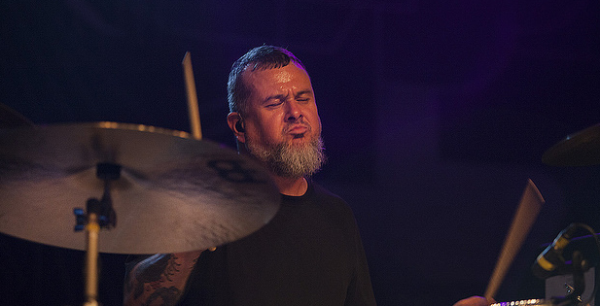