“I think that our music is a really good way for people to start listening to harder stuff.”

Hello and welcome to the Midlands.

I understand that this is not only your first UK headlining tour but it’s also your first ever date in the Midlands!

Olof: Actually we did play Bloodstock which is sort of in the Midlands but of course that was a festival. We’ve been looking to play here properly for a long time but it hasn’t really worked out with all the different details that we need to work out when we were planning the tour. It’s good to be finally able to play here ‘cos every time we play London it’s always a bunch of people ask us “Please come to Nottingham, Birmingham or wherever…”

There’s a lot of bands that say “We’re doing a UK tour” – and it’s London and that’s it!

It’s fantastic that you’re playing the Midlands and we’re really pleased about that.

Jake: But that has nothing to do with that we only want to play London it has to do with the logistics and everything like that. It usually costs a lot of extra money to tour around here. So that’s also the reason. 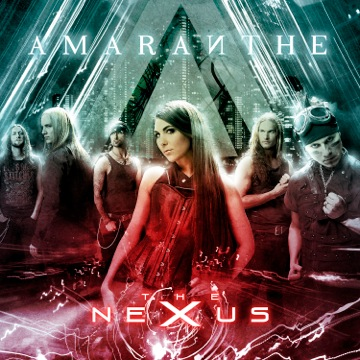 I know that you’ve been touring ‘The Nexus’ all round Europe, playing festivals in Sweden  and also Japan, Russia, USA and a co-headlining tour with Stratovarius. Are you ever surprised at the number of hardcore Amaranthe fans that are out there when you visit these places?

Jake: (laughs) Yeah on this tour we had I think three or four guys (who) more or less saw every show.  They were in the front row and you’re like “What the fuck are you doing?!” They’re travelling in their own car (using) the same routing that we’re doing. I would never have expected that when we started the band, no.

Olof: And I have to add that it’s also super cool to see every single show that we played on this tour – except maybe one to be 100% honest – has been fantastic. It’s been packed, like you say, with hardcore fans, with everybody in the audience singing along. So you can see that it’s not only friends tagging along its mostly hardcore fans so that’s super cool to see.

Amaranthe bridges many different genres – how would you describe the music of Amaranthe? Sorry that’s a boring question!

Olof: No, it’s not a boring one but it’s a constant one I would say. It’s hard to put words on something like music that is an emotional language. But just to begin somewhere, if you were describing it to someone who’s never heard it, I would say like it’s a combination of modern metal combined with some kind of modern pop elements.

Jake: We don’t really understand the idea that everyone always has to put their music into a specific drawer. But people in general need to be able to say that “I am listening to death metal” or “pop” or “techno music”. They have to be able to identify themselves with the music in one way I think.

There are lots of different elements to Amaranthe like you’ve touched on there. There’s the pop element, there’s catchy hook lines, there’s metal riffing and three very unique vocal styles as well. Is that something that is difficult to mesh together or does it come naturally?

But when it comes to composing now we try out which part will fit.

That was another question I was going to ask. When you’re writing it do you think “This part would suit this voice”? Do you have that in mind when you write it?

Jake: For the harsh part it’s quite easy because the riffs dictate itself, but for me and Elize we are more or less throwing dice “OK, you sing there. OK I sing there” and then alter the feeling of the song: should it start with this kind of vocals or this kind of vocals?

Olof: A small factor can also be the range. It’s not only Elize being a female it’s easy for her to go just a little bit higher. But on the other way round Jake can sing – and also sing really well – on a very low register. When I’m writing vocal lines, because we write vocal lines all three of us, it’s always really (an) inspiring thing (to have) this fantastic range that no singer in the World has. Not even Freddie Mercury had it! So it gives you a lot of creative freedom. It’s something that whenever I’m sitting down working I’m always very conscious of the different ranges.

For me there’s a lot of positive energy about Amaranthe in the music. I’m thinking particularly on the last album: ‘Invincible’, ‘Theory Of Everything’, ‘Razorblade’. Is that something you consciously try and put into the music?

Olof: I think we’re trying to have a balance, because obviously you have some very sombre and almost depressive songs like ‘Mechanical Illusion’ or actually the song ‘The Nexus’ itself. But we definitely want to have some inspirational thing going on as well. It’s something that comes quite naturally. For me the ‘Invincible’ song was kind of inspirational to myself. I was having a lot of problems in the studio recording the album and I was listening to that song and it kinda picked me up. So, there might be a bit of that yes.

The videos you have to accompany the songs on ‘The Nexus’ are quite cinematic. Almost like mini films in themselves. Was that something you always wanted – to portray Amaranthe visually in that way?

Jake: Yeah. That was actually an idea we had from the beginning before we even signed the deal – and this was something we really wanted to have in the deal. Our videos should be like trailers for an action movie and you should have all the best things in there. I think that’s really important.

The music of Amaranthe is quite accessible. Do you think it could be an entry point for people who maybe don’t listen to metal music?

Jake: I know that it is. Olof said in another interview the other day like, we’re playing Sweden for example (and) 50% of the audience is metalheads that comes for the metal part of the music and 50% of the audience is people that maybe have Metallica albums back home but nothing else. I think that our music is a really good way for people to start listening to harder and harder and harder stuff.

Olof: We are all gonna have a haircut! (everyone laughs)

You’re going to be bald on this album! (everyone laughs)

Obviously I’m not going to ask you to give too much away but is that something that you want Amaranthe to do – to keep pushing forward, keep pushing boundaries and bringing new things into the music and into the sound?

Olof: I think with the two first records, especially after the first record was released there was  quite a phenomenal response in a lot of ways, we wanted to follow up that naturally with ‘The Nexus’ album. Not necessarily repeating the same thing but taking the first record, building upon that, cranking everything up to eleven just like Spinal Tap. I think also that ‘The Nexus’ was kind of like a consolidation. If we’d have come out with a record that was drastically different from the first one as our second album everybody would just have been very confused and Amaranthe would just have been that confusing young band from Sweden!

But I think with the third record it’s the time to build upon what we have established, really try to take it further while also at the same time retain the core elements – all of the core elements – of what Amaranthe is. Nobody will be super confused but there will be a few surprised faces I think, yes.

Sadly that’s the end of our time together and as always the last words are yours so is there anything you want to say to your fans in the UK or in the Midlands?

Jake: Thanks for everyone that’s supporting us and coming to the shows and I hope you’re going to like the new album.

Olof: And thank you all the people in the Midlands for being patient and waiting so long to see us. Thanks a lot.

Good luck with the album and with the rest of the tour. It’s been a pleasure talking to you. Jake, Olof, thanks for talking to Midlands Rocks.

Jake: Thank you very much

Olof: Thank you so much