First released in April 2015 on a limited run of 100 cassettes, Lifestream’s debut album Post Ecstatic Experience (reviewed here) was finally released on CD in December. An accomplished album, it stands as a very impressive introduction to this French black metal mob. Here, vocalist J. talks to MR’s Jason Guest about the band’s formation and their influence’s the debut album and its creation, working with Emanations for its release, live shows, and the relationship between rapture and collapse…

Thank you very much for taking time out for this interview and congratulations on Post Ecstatic Experience. To begin, can you give us some background on the band? Lifestream formed in 2012. What drew you together to form Lifestream?

I think that it is first of all our love for music, black metal in particular that we listen for tens of years now. Many bands were truly inspirational for us, and we wanted to do the same; try expressing our feelings through this style of music, proposing our own vision about it and more generally about world surrounding us.

Who are the bands main influences? And how much of an impact have they had on Lifestream?

We each have our own influences, some out of the metal scene. Personally, if the melody reaches me and makes me feel familiar emotions, no matter the kind of music, it’s fine.

Regarding black metal, I’ve always been attracted by the melodic side, its melancholic mood but also its dark atmosphere. If I had to mention some bands, it would be for example Pantheion, old-Negator, Enslaved, Kvist, Taake, Ascension, Urkaos…

In our first album, I think we can hear these underground emotions, old or newer. So these bands had an impact, maybe unintentionally. And mixed with our other influences apart from metal music, it gives an interesting result, driving our black metal a little more modern. But it’s our first draft, black metal influences are still here, not totally drown yet.

What did you want to achieve with your debut album?

As described above, black metal is our chosen means of expression to develop our emotions, our world’s concept. We wanted to be sincere as possible, and it will always be our line of conduct. We chose a theme that allowed us to approach this existential side which is dear to us.

Since we formed Lifestream, we decided to play a melodic black metal with darker parts, and not a brutal one, raw and violent.

Regarding the composition, it is rare for us to have a precise idea of a final song before its creation. Nevertheless, the album has an intentional unity. Most of the time, guitar riffs are the base of a song. Then everyone works around it, trying different ideas. When all instruments are fixed, we compose the samples, and finally write the lyrics.

How long were you working on the material and how did it evolve since writing began?

The album was made over two years. Since the beginning, we knew what we wanted to fulfill, what kind of guitar riffs we would play, how would sound our first release. There’s still been an evolution, because of the original line up which changed, and also our taste evolving with time. Some parts of pieces are sounding more elaborate, away from our early influences, like the slow melodic part of “Parasite Glory” that we found almost at the end of the composition’s process.

Post Ecstatic Experience concept is the correlation between rapture and collapse. Much like the Yin and Yang, two extremes totally opposed, but actually deeply linked. You can find this concept in a lot of very different situations in life, this is what interested us. This duality is the essence of our music, and reflects particularly the album. Some triumphant and epic moments, others depressing or dark.

What are the themes across the album? And what draws you to these themes?

Each song puts in situation this bipolar concept described just before. Without doing a track by track, we start from a positive situation and broach for example loneliness, mourning and its stages, misunderstanding, glory and its decline, blind faith in a lie, disappointment followed by a rebellion… told metaphorically, often with double meanings, double interpretation. Generally all these topics raise existential questions (or questioning), show the result of certain actions and of the fall itself, in good or bad, and the continuity. These themes were inspired by the experience of life, hence the album’s name. To express it can be cathartic… or not. 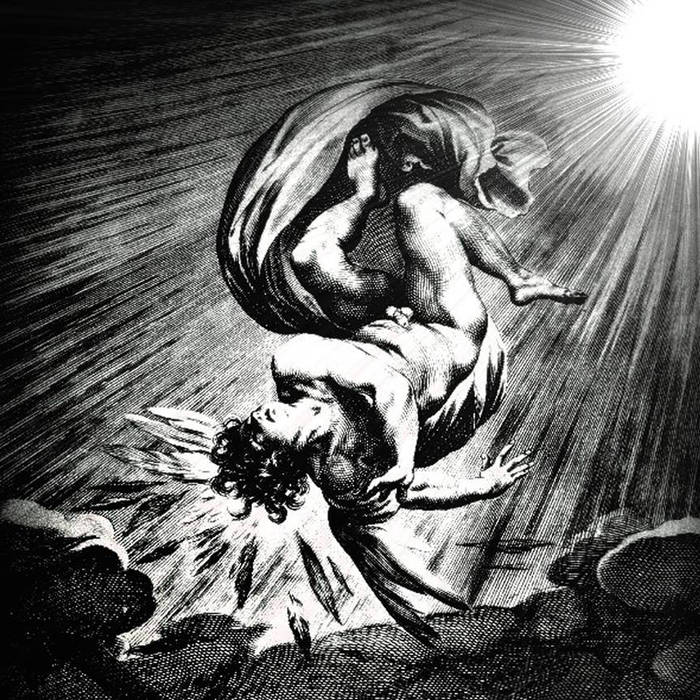 The artwork comes from an old italian engraving and represents Icarus. This famous myth tells the story of a man who, getting to close to the sun, burns the wax of his made wings, falls into the sea and drowns. I think we could not find a better metaphor for our theme, with all the messages and interpretations it carries, in addition to the obvious duality light/darkness.

How did you come to work with Emanations for the release of the album? And do you plan to stay with them for future releases?

We were lucky to have a positive feedback from the French known label Les Acteurs De L’Ombre, which created at that moment Emanations, a subdivision of their label. They offered us the release of our album on a tape format. It was a great opportunity for us to promote our album, and we already knew their strong investment in the bands they promote and in metal music in general, so we took that chance.

For the CD format, we proposed them a co-production, and they accepted. They really do great work, it is very encouraging for us.

So yes, maybe we will release our second album on Emanations. We don’t have the monopoly over final decision, but it would be great.

The album first appeared as a limited cassette release in April 2015 with the CD being released in December 2015. What took so long for the album to be released on a wider scale?

Actually, we had a plan of release and promotion with another label for September, 2015. But it was postponed in 2016, and we could not wait any longer. So the co-production remained the best option, and the CD Digipak appeared in December on Emanations.

How does the band approach composition? Is it lyrics first, or the music or a melody perhaps?

I answered already a little bit in a previous question. But yes, we very often start with guitar melodies, which are the base of the composition. All the rest comes by following.

Regarding lyrics, I write them only when the song is entirely composed, fixed and finalised. I prefer proceeding like this simply because I can better decide on which parts of the song I speak, the amount of paragraphs, words etc. Whereas with a text written in advance, you can end up with more words than necessary, or the reverse. And I do not like to repeat the same paragraph. No chorus. Like a chapter in a book.

What does the act of making music mean to Lifestream?

Making music is first of all a way of expression. I think the role of an artist is to make people think, think about world, life in general, about their condition, themselves, all this by trying to put into words his own feelings, emotions, outlook. That will necessarily be familiar to someone. And nowadays it’s important that people identify with the artist, to raise his awareness, sometimes to see the invisible, or simply to feel less alone. Music has that power, and we try to use it in this way, while having fun.

We’re working on it! We have about fifteen concerts planned in France for this year, but for the time being, nothing abroad.

What would be the ideal setting for a Lifestream performance?

Any place that would showcase the play of light and create a sombrely mesmerizing atmosphere.

What does the future hold for Lifestream? Is there more music on the works?

There will be a second album for sure. We must come to an agreement on the musical direction the band is going to take. We have new guitar riffs, but no composition yet. I think it will be more melodic, more epic, more experimental, less traditional without abandoning the occult side of our music. Only the future will tell !

Thank you for your interesting questions, for being so much interested in our project, and thanks to all the people who support us! Keep the grey flame alive!