Onward to the beyond…

Down-tempo and heaving in miasmic density, Ill Omen’s third full length release Æ.Thy.Rift is a phenomenal piece of work (read MR’s review here). Here, mainman IV dishes the filth to MR’s Jason Guest on the record, its creation, what that unpronounceable title refers to, live performance, and whether or not Ill Omen are black metal…

What did you want to achieve with this album?

Ill Omen has always been driven by the freedom of expression and sound. Striving to create an atmosphere in relation to feeling, lyrics and atmosphere, which is what this album allowed me to pursue.  I feel this is something ‘sacred’ when it comes to the creation of music. There’s nothing else to achieve.

What kind of progression does it mark for Ill Omen?

Personally I don’t think ‘progression’ is the right word to use as far as Black Metal is concerned. Black Metal never intended to adhere to guidelines and the themes/feeling and sound is what I have always considered the most important factor as far as music is concerned. I feel the personal need to continue writing dark music regardless of people’s opinions or outside direction.

I always have an idea in mind before starting the writing process as I base the music off the lyrics I’ve written prior but since I experiment with different tones/instruments and various other sources for the recording/creation process, Most of it ‘inspires itself’ so to speak and I just help it along. I find that mixing is where things really begin to take form and I can start dragging it deeper into the abyss.

It’s tough to say really… Quite a while. Some lyric ideas existed before the ‘Enthroning the Bonds of Abhorrence’ album but they didn’t fit with the concept and direction of that album so I kept them aside until I felt it was right to begin working on them again. The Æ.Thy.Rift album was completed musically at least 9 months before it was even brought to Nuclear War Now! Productions’ attention and physically released as I was in some deliberation with myself about actually releasing it at all.

The album title has various meanings which all tie in the lyrics. Without going to deep into it, it is a continuation (lyrically) from an older piece I did entitled Remnant Spheres of Spiritual Equilibrium which is based on the process of spiritual ruin and when the mind separates from the body at the moment of death. Based on esoteric teachings and archaic religious ideals from around the world and it’s various cultures. However, I have bled my own adverse thoughts and practices into this topic as that would feel wrong to follow the path of someone else’s teachings as the drive for this comes from within myself yet the inspiration comes from a magnitude of life’s experiences. 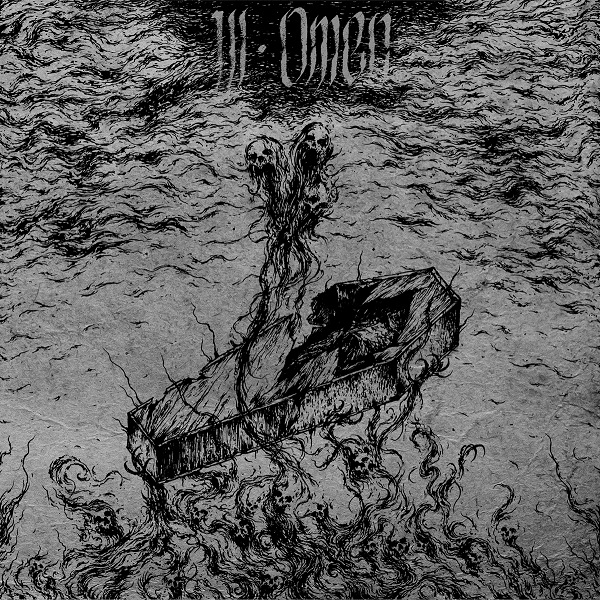 A representation of Death, Ascending the Aethyr. Onward to the beyond…

A Russian maniac named Yag Mort. We’ve worked together previously as well. He has done some excellent covers/artworks for various bands and has his own unique style. That is something I gravitated towards as a lot of other artists (musically/artistically) are all borrowing from each other and that is something I want to avoid getting involved with as much as possible. I gave him an idea explained in detail and what he submitted back was virtually what I had in mind.

Can you tell us about how you approach composition?

Generally, I write lyrics first and base musical ideas around that letting the lyrics inspire the sound and direction of the music. I am a slave to tone. So the feeling I get whilst writing and playing the riffs is what’s important for me and I wish to transfer that feeling to the final recording. Once I have built the idea in my mind and translated that to guitar/bass, I begin recording drums and add in layer after layer until I feel I have reached the goal I had set out providing the music ‘speaks back to me’ and carries a certain feeling. I have never set out to be a straight forward metal band as I am not a straight forward personality. Albeit, an unorthodox approach to creating music I would imagine but since I write/record/mix everything myself, it seems to be the best way for me to achieve a goal. I feel working in this manner is a reflection of myself into the music so it’s not something I can really expect others to relate to. It’s good if they do but it’s certainly not expected.

Ill Omen is referred to as black metal more often than not but your sound is much broader. Is black metal an apt description of your music?

Ill Omen has undoubtedly a ‘BM spirit and sound’ but I don’t think superficial things like tempos/specific vocal styles or cover art should wholeheartedly dictate the content of an album. If it’s ‘down-tuned’ or ‘really slow’ I don’t think it should be held to a specific genre. It’s the content and atmosphere that are the only importance. If I had to say it was anything, I’d say Ill Omen is a Black Metal band and I have no problem in saying that but at the end of the day, does it really matter what it’s called? I think people place to much importance on trivial things like that and I’d just think I have served the material to the capabilities available to me.

Any plans for shows in support of the album? If so, will we be seeing you in the UK?

There are no plans for live shows at this point. In 10 years of existence, Ill Omen has only ever played 1 live show. I’m not averse to playing again but I would need to find the right individuals to contribute. No easy task as up until this point, Ill Omen has been a strictly solitary endeavour thus the purpose of its existence. I play live with other bands and until now, that has been enough for me.

What does the future hold for Ill Omen? Is there more music in the works?

More music, delving deeper into distress and ruin. Await the opening of the void; and be it spoken through Ill Omen…