Conceived as “heavy acid doom inspired by drugs, alcohol abuse, death, black masses, sex, esoteric and mysticism”, Parma, Italy’s Caronte have been summoning the spirits since 2010. Two EPs, a split and two full lengths to their name, 22 July 2016 will herald the release of their mini LP Codex Babalon, a collection of three tracks between 8- and 10-minutes long brimming in occult atmospherics and doom-dragged darkness (reviewed here). Here, the band talk to MR’s Jason Guest about the mini LP and its creation, the female figure, sexual rites and all things occult…

What did you want to achieve with Codex Babalon? Did you have any specific goals for it?

Codex Babalon, it’s a vital stepping stone between Church Of Shamanic Goetia and the new studio album which we’ll release before the end of the year. We had a few concepts we wanted to elaborate, with regards to our magical path, which follows our composing and producing journey step by step. We wanted to keep this release on the down low, making it available only for our truest fans who are interested in the topics we deal with.

How did you approach composition for Codex Babalon? Did you have an idea of how you wanted it to sound or did it take shape as it was being developed?

This mini album explores womanhood and it sounds more obscure, perhaps it feels as obscure as we’ve ever gone. All three tracks deal with rituals and they sound just expectedly as we had hoped, full of magical power. I think this was possible because we wrote the songs at the exact same time that we were working on these rituals. We’re definitely going to keep this creative process going.

Why choose to release an EP rather than a full length?

We know this might not be the smartest marketing choice, but this EP, it’s very important to us as it exists in its own dimension, both musically and lyrically. We didn’t want to place these 3 tracks (they sound very similar and they are for many reasons) in the next album, it wouldn’t have felt right.

This EP was something we needed to do, creatively speaking, and we’re so happy our label understood and supported the project.

For this release, you’re focussing on the female figure and sexual rites. Why these? What do they represent?

Womanhood is a very important matter, especially on a magical level, It represents the duality of things. Fertility, through sexual rituals, can channel very strong magical energies, also thanks to meditation and Kundalini breathing.

One of the tracks, Elixir Rubeus, celebrates the creation of the elixir made with menstrual blood and sperm, which is often used in rituals.

Can you tell us about the title and its meaning? Does “Babalon” refer to the goddess in Crowley’s mystical system of Thelema?

Codex Babalon refers to study of the goddess, in the mystical system of Thelema. We dedicated all of our studies prior to the album and the album itself to Her.

Can you tell us about the artwork for Codex Babalon and how it relates to the music?

The artwork was made by one of our brothers, M. Tumulash, who has been with us since the beginning. Tumulash is a member of Fides Inversa, Darvaza, Deathrow, and other projects in the Black Metal international scene. A dear friend, actually. It’s the visual representation of the concepts we deal with in the album. For those who are familiar with magical symbols it will be easy to understand, especially considering the symbols’ positions.

Can you tell us about the symbolism in the artwork?

The Graal, the cup, is the main object of the artwork and it represents Babalon. The eagle’s skulls represent the spirit guides and Paimon’s seal stands for the determination and knowledge it takes to get to the Graal.

It’s the result of an evolution that has kept us all very emotionally invested. The topics we deal with have the same matrix even if we have evolved. I think maybe in 2010 we were moved by a more psychedelic vibe, more intoxicated and acid. Today our atmospheres are more tainted in black, the sound is heavier and we really wanted to add a sense of drama to the tracks, since the lyrics have become more tragic.

Though the band is Italian, you choose to sing in English. Why so? Is it a “universal language” for the occult?

Most certainly, also it fits better to our sound, musically speaking. We want to reach a few, elected bunch, but we want to find them all over the world.

What, if anything, are you searching for when making music for Caronte?

We try to reach the same mystical trance that shamans reach when they repeatedly bang on their drums, or chant the same line. We want to reach the realm in between us and the Cosmos. The tempo of the music changes according to the topic we’re dealing with. When we write we let the instruments speak for us, and we hope this is something people can feel when they listen to our music.

Having explored shamanism and the occult, are there any areas of the occult that you wish to explore further?

Even if I do consider myself as a sort of esotericism scholar, I think Caronte is the path we’re exploring. It’s the same path for each one of us; we still have a lot to learn, and a lot to say on these matters.

It depends, If you ask about Caronte, I can safely say we are a band who makes music by trying to transform rituals into sounds. The artistic part comes naturally, because we just don’t compromise, ever.

Musical and otherwise, who or what influence or have influenced Caronte?

Cinema has always been a big influence for us, from avant-garde to horror, also most literature from the 1900s, and a lot of other musicians who have dedicated their work to the relationship between music and magic.

What does the act of making music mean to Caronte?

Any plans for shows in support of Codex Babalon? And will we see you in the UK?

Well of course, we’re going to be touring with another band we really love, Wounded Kings in September. In october we’ll be at Phantom in Pilsen, then Leipzig and Salzburg, and in December we’ll be at the Eindhoven Metal Meeting with Mayhem, Tiamat, Moonspell and many others.

We played in London last year with Arcturus, it was really cool, and we would love to go there again, who knows.

What would be the ideal setting for a Caronte performance?

Maybe a crypt in the woods, or a small venue, somewhere warm, with dimmed lights and lots of candles.

What does the future hold for the band? Early days I know as Codex Babalon has just been released, but is there more material in the works?

We’re already working on our third album. It will be special, full of emotions, sensuality and death.

How do you see Caronte developing in future?

Divination was never our strongest suite.

Thank you for all the support, we hope you’ll let our music transport you, read between the lines and let yourselves go, only then you will truly understand what we’re doing. 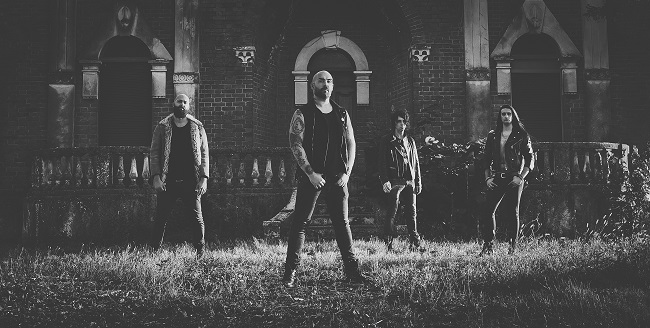