Having recently released their Lost Frequencies album rock band Hawthorne Heights make a welcome return to Birmingham’s Asylum venue as part of their European tour. Peter Dennis spoke to vocalist JT woodruff prior to the gig.

You’ve been fronting this band for 20 years. You’ve seen changes from Myspace to Facebook and from physical product to downloads. How have you adapted?

I don’t know that you can, to be honest. You’re ducking and dodging and shifting and trying to stay in the game. That’s all you really can do. I’ve found that it’s not a good thing to swim upstream and try to fight something that is inevitable. I think you’ve got to go with the flow to a degree but always stay true to your vision.

Coming from Dayton, Ohio I wonder did that physical environment shape your sound?

I think so. One of the things about Ohio is that it’s really isolated so I think that creates a little bit of loneliness in our music, you’ve gotta drive and get far away to see people and play in front of a lot of people so I think it makes the music scene close knit and tight. You really have to try to get anywhere…you can’t really treat being in a band as a hobby. So if you want to go far you have to drive far. I think that’s one of the things that’s kept us here, we still think it’s cool to see other places. 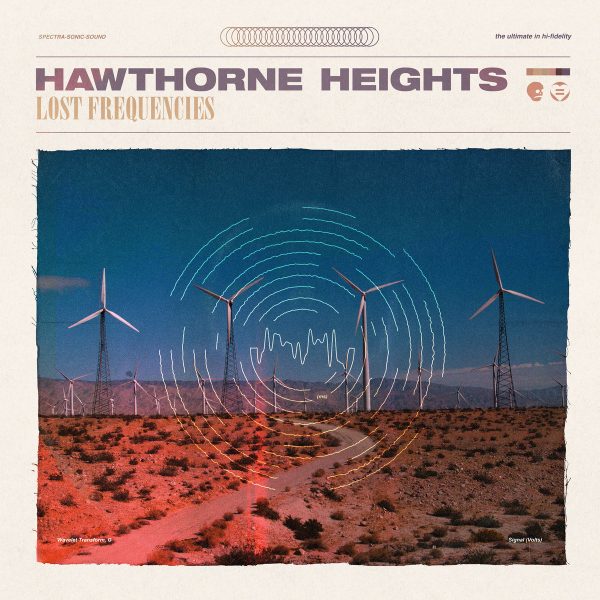 What was your reasoning behind releasing the recent rarities album Lost Frequencies? How did you decide what to include and what to omit?

A lot of it is songs that we didn’t put on Bad Frequencies, that’s why it’s called Lost Frequencies, the cover songs are songs we listened to growing up that influenced us. We’d previously just given them out to fans but we wanted to include them on vinyl for the first time, we thought that was cool. It has some modern covers, artists who we have nothing in common with, which we thought would be a cool exercise to play a song that has no guitars in it. Then other songs we thought our fans would want to hear and songs that wouldn’t fit onto Bad Frequencies.

Your cover of Cheap Trick’s ‘Surrender’ really surprised me. It doesn’t really play into the aesthetic of your band.

No, not at all. That’s just a song that we all really like. Cheap Trick is a band that we all really like as well. For some reason they’re not really heralded like Kiss or Queen or AC/DC but they’re every bit as good. They’re interesting, I think that might be why, they’re a little bit ‘out there’. The hardest thing when you come together as a band is to find cover versions that you all want to play and we’ve always struggled with that and for all four of us to say ‘absolutely, that’s cool’ then we have to figure how to play it our way.

You’ve had some tribulations with previous record labels. How did that play into your choosing to sign with Pure noise?

It definitely did. We’ve got a lot of friends around pure noise, they sang their praises, they don’t meddle in the music, they just want to put out good records. Upon having a couple of conversations with Pure noise it just seemed like a good fit. It seemed like people we could hang out with and get along with. We don’t want to be business musicians, we just want to be taken care of fairly.

Fans have such a personal relationship with songs. Lost Frequencies features some reworked tracks and you’ve rerecorded your debut album acoustically. How does it fell to go back and alter your songs?

For us, just like a fan has a certain time period and nostalgia, we have that as well so it’s nice to look back on it and give us those memories. It’s nice to change some of your past a little bit.

How would you like listeners to approach Lost Frequencies? As an extension of the last album?

Yes, exactly, that’s how I view it, as an accompanying piece to Bad Frequencies. It diverts you, maybe you took a wrong turn there for a minute but it loops you right back in there. They’re very good odds and ends but they just didn’t fit the mould of what a traditional album is.

How has your songwriting changed over 20 years?

It’s harder. You sit there and nit-pick at everything: is that Hawthorne Heights enough? It’s tough because you think about it a lot more. Back in the day you have no idea what you’re doing so your not even thinking about the song writing portion at all, it doesn’t even enter your head.

From where do you draw lyrical inspiration?

I draw it from every place. Sometimes you’ve really got to dig deep down for the worst memory of your life and focus on that and sometimes you’ve just got to watch the American news, that’ll send you into a tail spin no matter what you believe. Our news is negativity, one right after the other.

Recent additions Chris Popadak (drums) and Mark McMillon (guitar) have joined. How has it altered the groups chemistry?

It’s changed it for the better. Not that we had bad chemistry before but you go through mishaps and you focus on the music less. This was kind of our reset. To work with people who want to be out on the road and writing songs and focus on the music. Being out on the road is hard after all these years. You really have to want to be out here. We say we’re playing less shows but we never are.

We began by talking about the first 20 years, how do you envision the next 20?

I have no idea. Will we even have music in the next 20 years? Because music is so easily accessible, it’s on your phone, I’m interested in what we’re doing that way how will we be accessing The Sound of Silence in Black and White in 20 years? As long as we’re having fun we’ll continue to do it. We don’t have any bad problems internally, we don’t hate each other, we don’t do drugs or stuff like that so for us it comes down to how long do we want to have our pedal to the metal. Some bands burn themselves out and they can’t look forwards or backwards. I hope we’d be more like ‘let’s just pause for a while’ because if you don’t break up you don’t have to get back together.