Iceland has always been a hotbed for experimental and innovative music with Björk and Sigur Rós being two shining examples. Post black metal outfit Solstafir has really managed to deliver the goods with their latest album,entitled Ótta. MR scribe Raymond Westland caught up with drummer Gummi to ask him all about his band’s latest album, the concept behind Ótta and the rigours of touring.

Hi there and thank your for doing this interview. Ótta, the new Solstafir album received tons of accolades so far. Are you surprised by this incredible from fans and press alike?

We are overwhelmed by all the positive reaction it has got. We really expected more mixed reactions. So far I have seen only very positive reactions from fans and press alike, except one Norwegian reviewer who found the album to be not metal enough. Leave it to the Norwegians!

Ótta is very much a concept album. Can you explain the concept and the ideas behind it?

All the names of the songs are based on an old Icelandic way to tell the time of day, called Eyktir. Before people generally had clocks they’d estimate the time of day by the sun. In Iceland we’d divide the day into 8 parts, so each spanning roughly 3 modern hours.When Sæþór brought our attention to this old system we immediately realized it would make for a perfect theme for an album. The album starts at Lágnætti (Low Night) and continues through the night. Ótta is the time between 3 and 6 in the morning. Then it’s time to rise with the sun at Rismál, at Dagmál the day is fully begun. Miðdegi is midday and Nón is noon, although in this system noon is not at 12:00 sharp but rather the time between 3pm and 6pm. After that comes Miðaftan or mid afternoon and finally Náttmál, or night time. The lyrics are loosely based on the different feelings of the different times of day. But the times of day are also different depending on the seasons. Some have a more wintery feeling, while others are more associated with Summer. 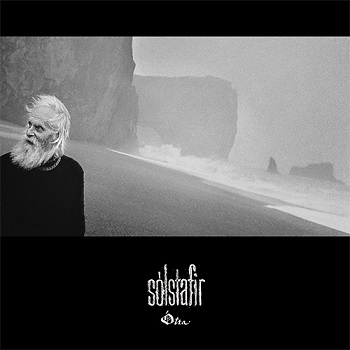 Ótta is full to the brim with beautifully crafted songs with a keen eye for detail, structure and atmosphere. Those songs also reflect how much you guys have evolved and matured as songwriters. What is your personal take on this?

I really agree with the maturity of the songwriting. I didn’t really realize this while we were writing, but after some time passed from being in the studio and I could listen to the songs with a clear head I think compared to our previous albums Ótta is indeed a lot more mature.

How important is it for you as a person and musician to keep moving forward?

It is and always has been super important for us not to stagnate. Since the first song we wrote we have always tried not to write the same song twice.

How did the writing and recording process go for Ótta? In which way did it differ from previous experiences?

We wrote Ótta pretty much that same was as we wrote Svartir Sandar. We booked the studio and then locked ourselves in our rehearsal room every day for about 3 months. We worked from 10 am to 5 pm almost every day.The biggest difference in the songwriting process itself was that this time we wrote some songs on piano. When you write on a different instrument the outcome will be different, and that is really apparent on Ótta.

The new album is recorded at the same studio as Svartir Sandar. Why did you guys decide to go back there and how did the overall vibe and atmosphere of the place influence the way the new album came out?

The vibe and the atmosphere was actually a part of the reason we decided to go back. We recorded Svartir Sandar during spring and the surrounding there is really beautiful, although it’s only a 15 minute drive from Reykjavík it really feels like you’re out in the countryside. Ótta on the other hand we recorded in the dead of winter and it suited the atmosphere of the album perfectly .

You guys played on a couple of festivals this Summer. How was the experience as a whole and how did the audience react to the new material?

We did 15 festivals this summer, so it was our busiest summer yet. It seems like people are liking the news songs a lot.

Solstafir has been around for many years and things are really on the up and up as far better tour opportunities and general popularity goes. Does this also translate in more financial gains as far as the band goes? How do you guys get by?

Hopefully it will. We’ve been in a really hard place the last few years. With the band taking up so much of our time that we can’t have normal day jobs, but not a lot of money coming in, and most of the money that comes in going into expenses.

Finally, what will your schedule be like for the rest of this year and beyond?

We’ll finally do a long overdue headlining tour of Europe that starts in late October and then head straight over to North America. We’re still planning the first part of 2015 but we post all information on our Facebook page as soon as we have them.