“Each of these songs was a piece to the puzzle, and ultimately this music will live on for a while.”

Thank you very much for taking time out for this interview and congratulations on Elements of the Infinite (reviewed here).To begin with, can you tell us what you wanted to achieve with your new album?

Ultimately it was just to make a good record. With the line-up change I think my main goal was to make a record that would not only stand up to our previous work, but be seamless in our catalogue.

How does it differ from Formshifter? Does it mark a progression for the band?

There are a few differences, the obvious one being the orchestral elements scattered throughout the album. With help from our buddy Joe Ferris we were able to capture exactly what we had going on in our heads. The other kinda afterthought difference is pretty much a whole record written by one person instead of half and half.

Did you have an idea of what you wanted this album to sound like or did this take shape as it was being developed?

I’m always writing, I probably started writing for this before Formshifter was even out, I just had way more work to do on this album so it was a little more gruelling. The overall thought process for an Allegaeon record isn’t that in depth, it’s always just make good songs.

I really like album titles that kind of incorporate the whole record as opposed to just a title track type of thing. The title was just a working name I just kept applying to the songs. After a while it just stuck and the dudes liked it. ‘Elements’ in the name just meant to me that each of these songs was a piece to the puzzle, and ultimately this music will live on for a while, we can hope for eternity but you never know.

Lyrically, the themes of space and science themes have been pushed further. What do you find inspiring about these topics?

Well, when we boil down our humanity, one of the greatest things about us as a species is our ability to learn. Science is just fascinating. Let’s be honest, we’re just a whole bunch of dudes, we’re not authorities, we’re not scientists; just dudes. Science just really intrigues us. We’ve done this science thing for the last couple of albums and we’ve created a nice little niche for ourselves. We don’t mind being pigeonholed in this, ’cause quite frankly it’s not like there’s a shortage of topics. There isn’t an overall concept, just relations through the umbrella of science themes.

The album sees the debut of two new members, drummer Brandon Park and guitarist Michael Stanchel. Why did you choose to work with them? And what have they brought to the band?

Mike and Brandon being fans before they joined really brought energy, and desire into Allegaeon, more that they rekindled everyone’s love for the band within the band. Mike brought a youthfulness and new influences into the band, as well as a couple rad songs. Mike was literally the only dude willing to play the guitar parts, and did such a great job it was an easy decision to bring him on board. Brandon, same thing spent time on tour with the guy and just did a great job every night.

Can you tell us about the artwork? What does it represent? And how does it relate to the music? Who designed it? And how much direction did you give them?

Yes, our friend Colin Marks from London handled the art, I think he’s done all of our records at this point. We just love his work, and working with the guy. The art on this album actually came to us through our label. I think the story goes Colin made this for another band, and they didn’t want it. So it was just floating around and up for grabs. We wanted something way different but in the end we thought it was so awesome we just said screw it, we want it. Like I said we’re big fans of his work. The last song on the album, ‘Genocide For Praise’, is trying to incorporate the artwork into the album, it’s a stretch but we tried valiantly.

For this album, you worked with Dave Otero again. What did he bring to the recording process and to the album? Was his approach different in any way than previously?

Dave wears a producer hat whenever he has a band in with him. In the past we haven’t always been very receptive to his suggestions. This time I knew my objectivity was questionable, just due to the sheer amount of work I’d put into it. I really sought out his opinion on things and welcomed every suggestion he brought to the table. He made a huge difference in some parts that really made the tracks better.

You described founder member Ryan Glisan’s departure as a win/win situation. Other than the line-up change, what impact has it had on the band?

Well, inherent in all line-up changes it gives you the opportunity to improve your situation. We were never really on the same page as Ryan. Way easier to see in hindsight than during those times. However, now, looking back retrospectively, it may be the best thing that’s ever happened to us. We’ve been able to do things that we couldn’t do before. It’s given us opportunities and opened a lot of doors for us. This is not bashing him mind you, just the reality of what unfolded, and what doors were open to us after his departure. Our relationship with Ryan was in all honestly, was one of just co-worker to co-worker. Now it’s much more of a friendly/family atmosphere. It’s let us instil new business models insuring the contentment of every individual in our business. It’s a great feeling to be working with these guys.

What are your tour plans for the album? Will we be seeing you in the UK?

We’re currently trying really hard to come over to the UK.

Thanks for having me, friend. Can’t wait to come play on your shores. 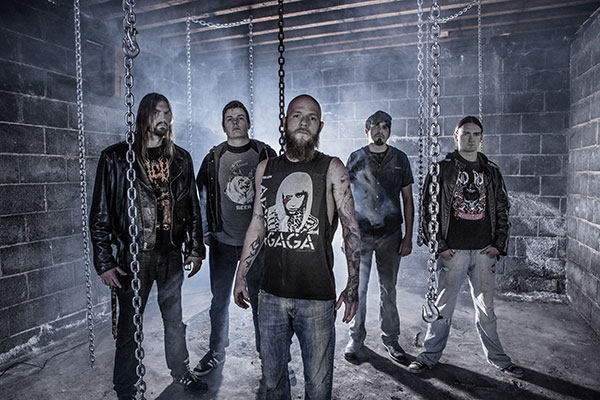