We rarely make any money from it but we have a passion for the music we play.

I really enjoyed Shebrew’s set this evening, Frank. Can you just give me some background on the band first of all?

Technically we’ve been around about five years but professionally I suppose for four. We were a four-piece for a while but we’ve worked with just the three us for the past couple of years and that’s working really well. I’m on guitar and vocals, my brother Kieran is on bass with Matthew on drums.

What releases have you had out so far?

In 2012 we had our Provenance EP which had five tracks and that was followed last year by another EP, Red Forman, with three tracks. They were both self-released and are available via Bandcamp or you can buy the CD through the Big Cartel. At some point we may look at bringing out those first two EPs on one CD

Are you happy with the tag of stoner band?

Yes! A lot of people for some reason don’t like that title but when I was listening to those kinds of bands playing this kind of music we all called them stoner.

What bands have influenced your musical style?

Certainly the likes of Obsessed and Pentagram; we’ve definitely always been into doom. Some say that stoner is grunge influenced but I enjoyed a lot of that scene as well. I’m a big fan of Kyuss and when I first heard those guys it just destroyed me. I think a lot of stuff is in the Shebrew sound but there’s also bits taken from bands like Machine Head and Slayer. 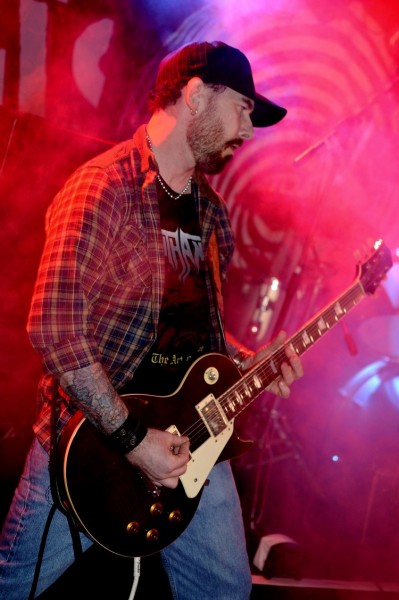 You’ve been busy playing around the Midlands, how healthy do you think the local scene is at the moment?

It’s great! You always get a good crowd here or at Scruffy’s or The Flapper. There’s a fantastic vibe and a lot of the bands know each other. Chances are people in one band have been in another. I used to be in Kroh with Paul Kenney (brother of Anaal Nathrakh’s Mick) who used to be in Mistress and we released an album and a couple of EPs. Birmingham is the home of metal but you can have one night when everything is rammed and the next night nothing

I understand you’re lucky enough to have your own rehearsal space?

That’s right. There’s a little studio in Digbeth and we have a lock-up there. It means we can go and rehearse whenever we want. We also store our gear there as well. We did used to share a place with another band but then you’re always having to work around each other.

What recording plans are you currently looking at?

We’ve a mini album called True Weight of the Earth on the way. It will have six or seven songs. It’s all been done in-house, including the artwork. It may be out before Christmas although logistically it may end up being early in the New Year.

Any plans to take Shebrew outside the UK?

We’d love to and we have had some great offers. There’s a real appetite for what we do in countries like France but Matthew is a teacher so we try and play around his work schedule.

So are you upbeat about the future of Shebrew?

Oh yeah, of course. Technically we see what we do as a dear hobby. We rarely make any money from it but we have a passion for the music we play. We never really want to headline at the level we’re at so we are always up for supporting other bands

Thanks for talking to Midlands Rocks, Frank – hope to catch you again soon.