With their first official release Armorican Deathrites appearing in early December (reviewed here), France’s Venefixion are set to make bloody waves. Here, vocalist F. Goathroat talks to MR’s Jason Guest about the mini LP, its themes, the band, the future and the exploitation of witches to make children do sensible things…

Thank you very much for taking time out for this interview and congratulations on Armorican Deathrites, a great piece of work!

Thanks for the interest you show to Venefixion and glad you like the EP. You have good taste I must say. I’ll pay you a beer.

It’s been about a year since your Defixio demo was released through Iron Bonehead. How far has the band come since then? And how is it reflected on Armorican Deathrites?

I guess since the first demo we evolved more as a real band. I mean, I still write all the music but since then we have recruited a new guitar player J.Obscene, and W.Cadavre took care of the guitar duties on the MLP, while I recorded the rhythm guitars and a few melodies on the demo. So it was perfect to set up the line-up for the live assaults that are coming. We also have recruited Max Abomination on bass, who used to play in Perversifier with me and who is a close friend. Musically speaking, don’t expect a huge change, I guess it’s the natural progression of the demo, with a few new elements though… But nothing Post, progressive, etc… Just pure Metal Of Death.

‘Armorican Deathrites’ is pretty easy as an idea, it just means the different aspects of Death, its acceptance and different beliefs still palpable around in our area called Armoric (which is the old name for Brittany, where we live). It was quite natural for us to use this name as it sums up very well the MLP; we deal about Death in Brittany, as simple as that.

Your first official release, what did you want to achieve with Armorican Deathrites?

We just wanted to reach a level upper as a whole. This we hope is done. Then, lyrically-wise, within the demo, we have been dealing about different subjects within different areas across the globe (that is going to be dealt about within the next releases again) but we felt like the need to focus more on our very own area and old ways if I may say. It was clear that the MLP would deal about legends or mysteries from the area our families come from or where we have been growing up. I personally see it as an homage to Brittany and my ancestors. Tribute is paid as far as I am concerned.

Of course we had our influences, bands that we like more than others, but we never create music thinking we would sound like this or that band. It has to come naturally.

There’s no recipe to write music to me. Sometimes I can find a lot of great riffs in a day, and some other times nothing for weeks, or even months. With the time, I learned that it’s useless to force yourself to write music, sometimes it’s frustrating to not find the following to good riffs but you just have to leave it like it is and it will come to you eventually. To me, that’s the beauty of it, this thing that you can feel in any genuine art. It is something greater than human spirit; it is Lucifer, the master of all creation that materialized himself through your art. To me that is the most magic and intriguing thing ever.

What are the lyrical themes on Armorican Deathrites? And where did you take inspiration from?

On Armorican Deathrites, we talk about the Ankou (he is like a grim reaper) but in our culture it is not Death, he holds his scythe turned upside down and wears only the typical Breton hat. He is what the people over here feared the most in the past. Then, we deal about burials how they used to take place over here, with a little bit of a morbid fantasy wrapped all over it. Finally, the last track is narrating the story of an old witch that used to live in the area and that got people scared of but also brought lots of admiration and respect. She (Naia) was a scary person but very smart. There are pictures of her that could be found, she was kind of a celebrity on postcards back in time and a subject used by parents to get respect or attention from their children.

The artwork is incredible! Can you tell us about it and how it relates to the music?

The artwork is actually a personal and unique presentation of the Ankou, I mean in the pure Karmazid style. The Ankou is a tall man, pale and skinny, scary and that hangs out at night looking for souls to take within his chariot dragged by two horses. It fits to the music perfectly as it depicts something ugly, threatening, quite savage and morbid.

Who’s the artist? Why choose to work with them? And how much direction was given in its design?

The artwork was done by the great German artist Karmazid. We knew for a long time we wanted an artwork for Venefixion made by him. It was easy to work with him as well. We are totally satisfied with it, he needed only a few details and directions, and then he came up with that final design, to which we had nothing we wanted to change. It got very smooth to work with him actually.

How do Venefixion approach composition? Is it lyrics first, the music, a concept or a melody perhaps…?

I write the music first but there’s no recipe for it. I never force myself to write music, it just has to come naturally, like any true form of art.

What does the act of making music mean to Venefixion?

Music is just my life, it’s the best thing ever but it’s also a curse, I’m obsessed with it and it ruins the normal life I could have.

We have been started to the band with the idea of mixing up elements from these bands: Repulsion, Massacre, Repugnant, Death, Autopsy, Grotesque, Morbid Angel…

Why death metal? Hasn’t it all been done to death?

Because we knew there was still a gasp for that exact type of Death Metal that is too rare nowadays in our opinion. We are personally fed up with most DM bands nowadays (last things we have been buying were Vorum, Degial and Grave Miasma, plus Catacomb that is no brand new band). We think Death Metal needed to renew itself a bit and we were here to modestly try to bring some fresh yet rotten air to it all. We have no intent at all to say we are innovating or revolutionizing anything with Venefixion, we just try to not make it tend to a boring and useless type of music with what we can bring out.

Sure our first gig (not a ritual!!) took place early November in Nantes, where we shared the stage with Occult Burial, Ritualization and Cauchemar. Then, in the second day of 2017, we will be the openers for Death Metal legends Sadistic Intent in Rennes and the month after we will take part of a mini Tour with Lucifericon and In Aeternum in Germany, Belgium and The Netherlands (will be only three dates). And, I cannot confirm anything yet, but there seems to be chances for us to come playing in the UK later in 2017.

What would be the ideal setting for a Venefixion performance?

First, bands that would fit with aesthetically or musically. This is the first condition. Bands not caring for politics or different types of proselytism or lobbying. Then, an audience just receptive to Death Metal and organizers knowing we use blood and different elements on stage. This is the ideal setting to us. Playing at first or last doesn’t matter if the other bands do not differ too much in terms of attitude or musical directions. Getting enough for cover the costs of the travel go and back and that is it at the moment…

What does the future hold for Venefixion?

We hope a split EP with a band we appreciate a lot including an exclusive track for each and a cover song as well for both. In case, for any reason this would never come out, we would start working on our first album (which has already started as far as I am concerned, as I have already a few texts ready that just need to be reworked a bit). More shows, especially out of France hopefully and that will already be enough.

Thanks for supporting the celebration of Death that is Venefixion and never forget:

ONLY DEATH IS REAL. 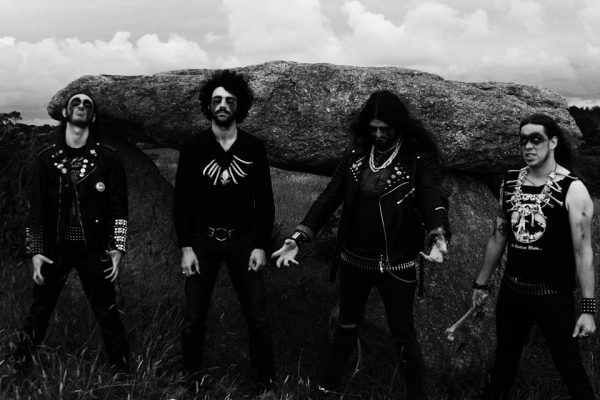