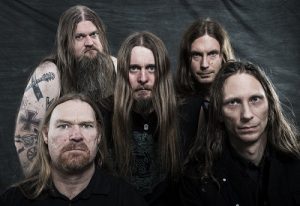 Formed by schoolboy pals Ivar Bjørnson and Grutle Kjellson, Enslaved are still a formidable force 25 years later. Paul Castles caught up with the Norwegian duo just prior to their recent show at the Slade Rooms in Wolverhampton.

“In the pre-digital age when we ordered a demo tape from Malaysia or Poland you would be waiting for that cassette in the mail and it could be anything from a week to two months for it to turn up. So there was a greater appreciation of the music then compared to now when it is so much more easily available. In the internet age musicians have to be entrepreneurs as well as just musicians.”

Interview with Enslaved by Midlands Rocks Radio on Mixcloud