We’re a pretty uncomplicated band; we just want to play to as many people as possible…

Here at Midlands Rocks we just love discovering new and emerging bands – especially if they happen to be from this proverbial neck of the woods. Whilst throwing down at the rather awesome Macmillan Fest in Nottingham this past month, we got the chance to check out local lads Enormity Falls live. This hard working, thrash and rollin’ quartet have been winning over audiences since 2012 and having reviewed their debut EP Voices (and gotten all frothy over it we might add) it seemed far too good an opportunity to waste. MR’s Sophie Maughan caught up with the band for a bit of a post-gig chinwag.

So, you just played the Spanky’s stage as part of Macmillan Festival. I was there and thought you killed it. How did you find it?

Guy: It was good fun. Everyone there seemed to get in to it, which is what we’re looking for really. We got a chance to show the fans some new stuff and give the new faces a taste of what we do.

Stu: We enjoyed it a lot! We love playing new venues, even though it was a strange kind of stage set up… but it did mean that CJ could have front and centre on the drums for once.

CJ: Yeah I’m usually tucked away at the back of the stage so it was good to be able to interact with the crowd more than usual! I thought we nailed it!

Kev: It was very hot and sweaty; just how we like it!

Did this gig have a more significant or special feel to it with it being a local affair? I know you guys all hail from Nottingham.

Stu: Kev and I are Nottingham born and bred. CJ and Guy have just been here so long we’ve let them stay. We always love playing in Nottingham, and getting to play Macmillan Fest was fantastic. It’s always something we all go to, so it was great to get involved with it. The bands coming out of this town at the minute are awesome.

CJ: I’m a southerner but I’ve lived in Nottingham for about 13 years, so it definitely feels like home. The majority of our gigs have been in Nottingham but it’s been great to be part of a bigger event, and get a bit more exposure, all for a good cause too.

How did you get involved with MF? It’s obviously for a fantastic cause, but the fact that you’re also getting your music out there must be a massive bonus?

Guy: We took part in the early stages of the Battle of the Bands competition for a chance to win a spot on the line up. Unfortunately we couldn’t make the semi final but Kris (MacMillan Fest organiser) offer us a space on the bill. He must have enjoyed our quarter final! We were really pleased to get the chance to play with it being a local show, packed with great bands and supporting a charity that I personally feel is really important.

Were you disheartened at all by the smaller size of the crowd that watched your set? I imagine it must be tough when you know you’re up against more well known artists at the same time on the line-up.

Stu: We’ve played to smaller crowds than that!  It is great to have a massive audience watching, but if that’s not going to happen, as long as the ones that are there enjoy it, we’re happy. Hopefully they’ll tell their friends, and next time we’ll have a few more watching. Whatever the size of the crowd, we enjoy it and always play like there’s thousands there!

Kev: Quality, rather than quantity!  We had our awesome fans there who get themselves to most of our gigs, and they’re really important to us.

CJ: Like Stu said, I don’t mind if we only play to one person, so long as they’re having a good time, that’s all that matters!

Guy: Obviously we’d prefer to play in front of more people, we honestly believe a lot of people out there will enjoy partying with us. That being said, the size of the crowd isn’t everything. If we get to continue playing in front of a few fans and a handful of new faces, I’d be more than happy.

Are there any songs that you didn’t get the opportunity to play that you wish you had now?

Stu: Z is for Xenomorph was taken out the set for a new one, Oceans. Xenomorph has received a lot of good praise, so if we had more time we’d have put that in.

Kev: It was difficult to leave Xenomorph out, but we all love ‘Oceans’ and wanted to share it with people

CJ: I think we got in what we wanted to play most. I’d have liked to play ‘Seasons Merge’, the ending to that one usually gets the crowd going! We’ve got a pretty cool McFly cover that pops out every now and then too…

Did you get the chance to catch any of the other bands on the bill?

Guy: I was there all day so I got the chance to see a few of the other acts. We’ve got friends in The Spangle Corps, Vanity Box and The Winter Hill Syndicate so I made sure I saw all of those. They all nailed it. Highlight of the day had to be The Safety Fire, they’ve got me properly hooked.

Stu: We’ve played with The Spangle Corps a couple of times and they always put on a good show. The Winter Hill Syndicate killed it in the Rescue Rooms. We caught the end of Shields’ set, which sounded awesome. Of course we went to watch Bleed From Within too.

Your current EP Voices (which we’ve reviewed and it is rather bloody good – see here: http://www.themidlandsrocks.com/enormity-falls-voices-ep/) is available now to download and you’ve also got a video out there for ‘This is All I Have’. Can you tell us a little bit about the song itself?

Kev: It’s one of our oldest songs and the first we wrote as a 4-piece, 3-vocal band.  We love the song and the fans’ reaction to it made it the obvious choice for a video.  Thematically, it’s about giving everything you have but it not being enough.  Musically, it’s the perfect set closer – in fact, we haven’t played a show where we didn’t finish with it.

CJ: I can’t remember a gig where we didn’t play this song at all! I love playing it, and everyone in the crowd seems to enjoy it too!

How was the recording process for the EP? Any creative differences or rockstar tantrums to report?

CJ: I’m really in to the whole recording and production process, so I’m like a pig in muck! We don’t tend to have any issues when we get there as the songs are pretty much complete by the time we record. We usually end up adding little bits to the songs while we’re there, and we don’t mind speaking out if something sounds shit!

Stu: Recording the EP was pretty straight forward really. It helped that we were working with Phil Wilbraham. He knows his stuff, and produces an awesome sound! He knew exactly what we were aiming for every time. Within the band we get on really well, so no tantrums that I can think of. As long as the tea kept coming, and the milkshake, (plug alert!) Monster, KFC and Mcdonalds kept stocked up, everybody was happy.

Guy: I love recording, it’s a slow, infuriating and often boring process, but it pushes us to our limits and brings out our most creative edge. The only tantrum that springs to mind is when I forgot the lyrics to See The Noise just before I was due in the vocal booth. I’m not quite sure why I thought it was everyone else’s fault!

CJ: Recording drums for ‘This is All I Have’ whilst recovering from a chest infection was pretty intense too!

Are there any artists who have particularly influenced your sound? I definitely detected hints of Machine Head / Killswitch on first listen of Voices.

Kev: Those are two bands that we are fans of and it’s great to have comparisons with them.  We all have our favourites that influence us, ranging from the likes of Tool, Paradise Lost and Sevendust to August Burns Red, Alterbridge and NiN.  However, we don’t try to copy anyone and want to sound like no-one else out there.  We think we’ve managed that.

Guy: I always smile when we get compared to bands like those. Personally, I have to give credit to Tom Morello and Jimi Hendrix when it comes to my guitar style. Vocally? I like to think we’re bringing something new with the three vocals that is difficult to compare to other bands.

CJ: Its pretty diverse, I think we’ve all got reasonably different tastes in metal or rock. My drumming is mainly influenced by Dan Foord (Sikth), Abe Cunningham (Deftones), and Matt Greiner (ABR) who gave me a drum lesson earlier this year!

How has the general reaction from the fans / press been to the EP? I don’t think I have actually read any negative reviews so far!

Guy: The reaction has been amazing. The launch show was probably the most fun we’ve had since Day 1 and the reviews and comments we’ve had following the release has really spurred us on. We do this for the fun of it. If people enjoy what we do, it makes it infinitely better.

Stu: Everyone seems to love it, which is great! We’re loving everyone’s reaction. It makes the late night practising and writing all worthwhile. We’ve had nothing negative yet, brilliant!!

What’s next for EF – do you have any plans to tour?

Stu: We’re just about to head into the recording studio again, starting work on our second EP for release early next year. While that’s happening, we’re writing some new EF classics (which people are going to love) and we’ll be playing as many gigs as we can.  Hopefully we can put together a tour soon, cost, work and family-life dependent. If some record company / promoter / band wants to take us on tour though, we’d be more than up for it!!

CJ: It’d be great to get some gigs further a field, like Birmingham, Sheffield or Leeds, but it’d also be awesome to play Rock City. I reckon we could get a crowd for that!

Guy: Like Stu said, we’re recording the next EP right now. The gigging doesn’t stop though, we love it too much. An Enormity Falls tour? Sign me up for that.

Finally, we like to give our readers that little something extra. Do any of you have any pre-gig rituals or bad habits? We promise we won’t tell anyone.

Kev: Well, we’d like to give your readers something extra as well but unfortunately there’s not much to share here!  No bad habits or rituals really (unless a few drinks before going on stage counts as a ritual?).  We’re a pretty uncomplicated band; we just want to play our music to as many people as possible and enjoy ourselves.

Guy: I’ll admit, I do get plenty of drink down me before a show. A few vodka red bulls might not help with the accuracy of my fretting hand but it does push me in to that rock star mode!

CJ: I just tend to focus on warming up my legs; a bit of running on the spot usually does the trick! Try not to get pissed before we go on!

Want more? You can keep up to date with all the Enormity Falls news and forthcoming tour dates via their official Facebook page 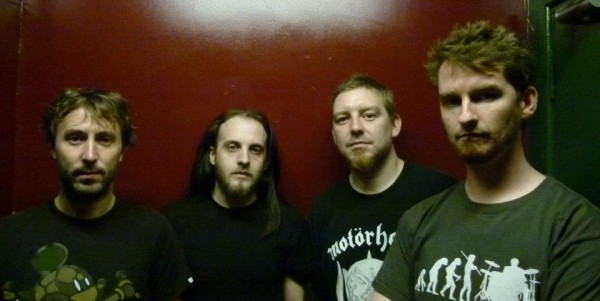