Existing somewhere between grunge and hardcore Drug Church are the latest in a long line of great, innovative New York bands. Peter Dennis spoke to vocalist Patrick Kindlon and guitarist Cory Galusha for an exclusive chat just before the band hit the stage at this years 2000 Trees festival.

I hear very little classic rock in your sound. Was that a conscious decision?

Patrick: It’s funny you say that as you’re talking to the two most classic rock guys in the band. I definitely take something from Rush. The thing is classic rock guys are all great musicians and we can’t play that well. We’re too good to play punk and not good enough for classic rock so it’s alternative rock for us.

How involved are you with the bands presentation?

Cory: I’d say I’m very involved. I’m usually the guy thinking about the album artwork. When we started this band I made sure we thought about every aspect, not just music and lyrics, but also the presentation because ultimately when a kid walks in a record store and Drug Church catches his eye and pulls out the LP (2018s Cheer) I wanted to hit people with something that wasn’t necessarily controversial but I wanted it to be bright and catch people’s eye.

Patrick: I’m not involved with the visual aspect of the band but I will say it’s important. I love the UK band Leatherface. They have the the worst album art in the world bar none. They were able to do that because in my view they’re in the top 5 punk bands of all time. I can’t imagine how hard you’d have to work to make people care about you if you had no visual side whatsoever and weren’t one of the best punk bands of all time.

In popular culture drugs have taken the place of the devil as society’s bogeyman. Did this play into your choice of band name?

Patrick: No. The name came about because we didn’t think we were going to be anything other than a local band so we chose the most local sounding name of all time and it just so happens it didn’t sound local to anybody else. Journalists found it interesting but to us it was like Scum Hornets or Sex With Room Mates, bands that sound so local and are only playing the clubs. We wanted to do something like that and we weren’t good at guessing what that would be.

Has your name caused much consternation?

Patrick: Our last record made us a little more popular and it led to more opportunities but when you’re playing 150 capacity rooms around the US and driving around on 4 bald tyres in a semi-stolen van the name Drug Church works perfectly! When you want free sneakers it doesn’t work so well. I wouldn’t say anybody’s gotten in our face about it, no customs official has ever patted me down, but man, sometimes I think ‘I want free iced tea! why can’t we get free iced tea?’ because our names Drug Church!

Coming from New York due you ever feel a weight of expectation with all those great bands that have come before you?

Patrick: No, because there’s so much trash too. All you have to do is go to one of the shows during the fallow periods, everything sucks and you can think ‘Damn, I’m Killing it!’ New York’s got a great history with lots of stuff coming out of it but I don’t feel much pressure because of that.

How easy is it to survive as an independent band?

Patrick: I’d advise people to get into burglary! Learn a trade such as lock picking or holding a gun to somebody! It’s not easy. For this album we went 90% full time, by most 2019 standards we were a very full time touring act, by 1995 standards we didn’t do enough. If we went 1995 style on our next album we could afford a nice life. As it stands I still work two jobs.

Patrick: You eat a bunch of food. You’re not headliners so there’s not a ton of pressure on you to be the band that makes everybody’s weekend. You come out, people enjoy you or they don’t. A lot of people watch you, you can’t tell if they like you or not, but there’s a lot of them, so that’s a win…and you’re eating eating everybody’s food!

Do you have time to check out other bands?

Cory: We do. Our stage is really good this year. Gouge Away are actually playing now. I’m actually mad we’re missing them.

Your performance is very energetic. How do you prepare to go on stage?

Patrick: He drinks a lot of soda. I feel afterwards I need to lay down but before I can wake from a nap and take to the stage. It’s only afterwards I think ‘Damn! I should have stretched first.’

How do you write songs?

Cory: Music comes first, always. Like any band it all just starts with a riff. You piece it together. You fight a little bit or whatever. The lyrics are all Patrick.

Patrick: I could sing somebody else’s lyrics but then again I like doing karaoke. I don’t think I could do it in a band necessarily. The way I write lyrics, I go in  the studio, usually why they are recording, I’ll come in, check it out, make sure it doesn’t suck, then I’ll come back when all the music is done and I’ll listen to the song that I’m going to record and for 1 hour go in and try it just how I wrote it. That’s been my process my whole life. 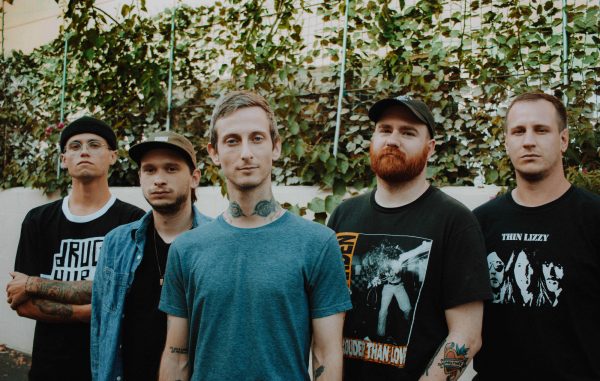