“We are not interested in a label at the moment”

Hi guys and thanks for meeting with me, I saw your set last night and was well impressed.
Tell me about yourselves and how Deadly Circus Fire started.

I’m Adam – lead singer, I’m Mike – bass player and I’m Save – guitar player and there is Paul, the drummer, who is currently unconscious fast asleep.

A – DCF was originally Save and Paul, who met up in Kent with Save coming over from sunny Italy.  Paul came over from Ireland with aspirations of starting something with music. They met each other through Paul’s girlfriend at the time and they kinda hit it off quite well and musically they are on the same wavelength and after that they went looking for a bassist and Mike fitted the bill. He came all the way from Italy and all of them had the same kind of feel to what they wanted.  Mike posted an ad online using key words and our influences and stuff and after so many auditions or something stupid like that like cowboys and rappers, I came along and they were like oooh no cos I am a bit younger than the lads and at the time I had a bit of an Oliver Twist’esque feel to me and it’s probably more like Fagin now [laughing] and they were like “who is this kid” and even said “have you got a microphone”, I said “I didn’t know I had to bring one” and they said “we don’t have one” and then I thought this is a complete waste, so I started belting out and they started belting out and it went kinda quiet and I went “that was awesome”.  We then went upstairs and had a drink at the Crowbar which is where our studio is based and I went “do you wanna do it?” and save called me aside and said “are you serious about this?” and I said “yes”. It’s been five years now and we’ve stuck it out.  It feels like it was yesterday.

I love the Hear No Evil, See No Evil and Speak No Evil on your EPK – what made you use that saying?

A – because of the whole Prog thing we like breaking things up into something that has more of a feel of its own little genre within a genre and all about journeys, that kind of feeling of Part 1, Part 2, Part 3, you know each in their own blends perfectly but they are all their own completely different entities.

I understand that The King and the Bishop had a delayed release and when it went live it was attached to the front of Metal Hammer’s August issue last year.  That must have been an awesome feeling for you?

S  – I remember that when I saw the magazine, I was in Stansted Airport and I went into WH Smiths and I see the magazine with our album. It was amazing, imagine that.   I come from the south of Italy where this wouldn’t be possible for me to achieve this if I hadn’t left.  So I am here in London, I go to an airport and I see the magazine with the album that I have played on…..you can’t really explain the feeling.  For me it’s the biggest achievement of my life so far.

M  – for me it was more a feeling of “it’s cool” and it’s nice to see the album on the shelves with a magazine and it would probably be listened to by many many more people than the norm cos if you buy Metal Hammer magazine and find a free CD on it, you’ll probably give it a go.  It was a cool way to try and get more people interested in the band, so it was more that kind of idea I was excited about.

Reading the reviews for the album, it has been well received and well reviewed – how long will you tour this album and when will you start working on the next one?

S  – already….we are already working on the next album with 50% already written.  If everything goes according to plan we should probably have singles ready at the end of the year and the album before the end of 2015.  You may have realised, we played three songs from the new album, the first one and the last two.

Your single ‘The Light Within’ was featured in the British black comedy horror film ‘Crying Wolf’ – how did that come about?

A  – it was through my parents, they were both in the West End productions like Cats, and I grew up watching films, musical and shows and that’s how I got into my side of singing and my Father still does his films and he is a voice over actor for adverts and stuff at the moment but he was doing a film at the time and his Director listened to the album and The Light Within and said “I want to use this single for the film”.  My father approached me and said “don’t know if you are interested but would you like a music video sorted”.  Well of course it’s like yeah, who offers you a free video recording.  We were doing each other a favour and we were giving them a song that would really help give the film more gravitas and they were giving us a video which gave us a bit more gravitas.  It was very much a scratch my back etc etc.

S  – I just asked yesterday when was I going to be released cos it hasn’t been released yet.  They are making the whole grading again because it’s now going to be in 3D cinemas and will have big exposure.

So what are you plans now for the rest of the year?

S –  It will be writing the album and recording the album and playing festivals.  We have a festival coming up – Les Fest in Scotland, then Tech Fest all dayer in London and then the Tech Fest main stage in Newark.  We have also got a festival in Ireland called Philfest  and another one in June but can’t play that one anymore cos at the exact time we have to work in the studio to do the pre-production

A  – it was a conflict of schedules, it was oh fantastic can’t wait, we wanted to see the mad crowds, but we got wind of what the dates were and we thought oh no,  we had a chat about it and unfortunately we could not do it so we turned it down. That will be one of our big regrets this year but hopefully it will get better from there.

Are you likely to do any more UK dates, perhaps towards the end of the year?

S –  we like to play as much as we can, we would play every day,  something will be sorted for sure but for now, to be honest he main things for us will be to finish off the album.  You know The King And The Bishop was released for the first time on 2012 so now its two years and you want to give something new to the people so this I think is the main priority for the band now. Then to get the press structure around you to get the album out and get it released at the right time.  I don’t want to make the same mistake as we did with The King And The Bishop I wanna make sure that it is properly recorded, properly mixed and mastered and there is someone behind the release.

And are you using the same label and producer?

A – everything at the moment is at the stage where we have so many things and quite a few options available and we are basically, even on the way up here, kinda negotiating things to consider and until then….

S –  to be honest I think we as a band are not interested in labels, I mean we know really well how the music industry works now and as a band you don’t really need a label, not at this stage.

But ideally at the end of the day you want one that will work for you, with you and not strike out the way that you are trying to progress?  You want someone that is totally enclosed in your genre of music?

S – but we are not interested in a label at the moment – to be fair even if we have to use Pledge for example, I prefer getting in touch the fans, fans that have sponsored me because I know they want a record and then with that money record the album and with any distribution company, you just put the album out.  Doesn’t have to be physical it could all be digital but I love to go physical.

A  – We are happy with the fact that we have a very dedicated following and all it takes in a lot of cases is one person.  We have almost 20,000 fans on Facebook and that’s the ones that have said “like”.  The rest are people who don’t have Facebook so for us that’s great.  We can probably get more fans but every single one of them has the ability to help us so in turn, we give them back what they want which is decent music.

Well guys, I’d like to say thank you for spending time with me  and it’s been an absolute pleasure. 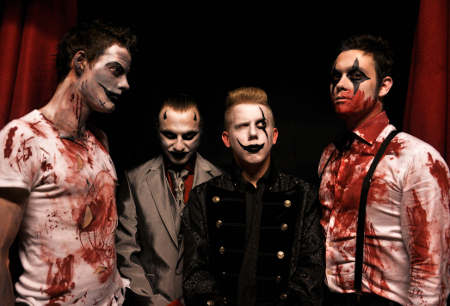