“…we’ve learnt the hard way that you need to have a finishing house.”

In a career spanning over 20 years, Cradle Of Filth have become one of the leading forces in extreme metal, especially where the UK is concerned. How do you stay fresh and at the top of your game 10 albums down the line?

Erm…botox! I’m not sure, just the love for it I guess.

The Manticore and Other Horrors, Cradle’s latest release, showcases a much more head-on approach: to these ears, a more ‘straight metal’ approach than both the epic Godspeed On The Devil’s Thunder and melodic Darkly, Darkly Venus Aversa. Was this a conscious choice?

Yeah, there’s definitely an element of Paul listening to some of the older, punkier stuff we do, Principle… era and injecting a little bit of that into it.

In previous interviews, you’ve stated that while there are some conceptual elements (Mythological creatures being the recurring theme) there’s no full ‘story’ being told, was this something you planned?

Yeah, it’s more of a menagerie. I think after Godspeed, we said ‘We’re not going to do another concept album for fucking ages’ but we ended up doing a sort of sister version on Venus, but this time it was a definite choice to not go that route because it does inhibit you in some respects: you have to set things in stone at some point in order for a story to be made, like putting together a movie. It felt better, fresher.

First album as a three piece, what brought that on?

Well, it was just the current writing core at that point. We parted ways with our bass player who’s given up music and he wasn’t contributing to the writing as such… we just thought it would be easier to keep it as a three piece for this record. That’s all going to change with the next album which we’ve already started writing.

With such a wealth of material to draw from, how would you even start to go about writing a setlist?

It’s difficult, we find ourselves playing the same songs… I was just talking to Nergal about this, how ‘oldschool’ our set is, I think he was hinting that we’re trying to out-blast him! Maybe subconsciously… but it’s good to put a bot of that older material in there, but it is our 20th anniversary from what I call our beginning, the debut album, otherwise it’ll just make me feel even older. But yeah, the set is mainly stuff up to Midian, doesn’t creep past it much bar a track from the new album. It’s our Somewhere In Time tour, but smaller.

It’s obvious from your work that you’re inspired by HP Lovecraft, are there any other classic writers you take inspiration from?

Yeah, all kinds of things… Robert Louis Stevenson, Poe… the usual suspects. I read all kinds of things, at the moment I’m reading Wayne Simmons, a current pulp horror writer who actually send me the books personally… zombie apocalypse type stuff. But HG Wells… I really like 19th century authors. But a lot of current stuff too.

Which were the bands that got you into extreme metal?

It was a real smorgasbord of things, especially in the early 90’s and the ascent of Swedish melodic death metal and that sort of British gothic movement which started with Paradise Lost, Anathema and My Dying Bride…and the American stuff too. We liked our stuff melodic; we still had the thrash feel a la NWOBHM… but soundtracks too. I started getting into them around the time of Bram Stoker’s Dracula came out, and I think I listen to them more than I do normal music now.

Your unique vocal style is one of Cradle’s most interesting facets, who inspired you and how did you develop your technique?

Originally, I was inspired by Tom Araya, but then King Diamond…the guy from Razor is the one who got me into the high pitched stuff. I love Danzig too, a whole myriad of stuff…I didn’t like doing one thing all the time caus it got boring… I was listening to Dusk…  today and it’s just not me as a 40 year old guy. It is me caus it’s my music and stuff, but I wouldn’t want to do that now.

I noticed this with Manticore…, the vocals are a lot more melodic, even the growls.

Yeah, I just feel now, in my career (without sounding like a right asshole) that I want people to be able to hear the words. Someone just ‘rah rah rah rah’ is a little childish… been there, done that.

It’s the same on the new Behemoth record, much clearer diction.

Yeah, I never got death metal. This totally intricate music but what sounded like one guy going through it with the sound effect of a drain: it’s just pointless. The same as just having double bass through everything, it becomes another unnecessary passenger.

Are there any bands on the scene at the moment that you’re into?

I’m getting into Inquisition and Svarttjern actually. I like In Solitude too, I had one of their albums prior to the tour, Sister, which is great. And Behemoth, obviously. Other than that, the new Carcass, Ghost, Craft…a bunch of stuff really. I’m not super on it to be honest.

You guys recently crowd-funded the release of your own graphic novel, ‘The Curse Of Venus Aversa’, why the shift into the comic book industry?

Somebody approached me about it,  a long term friend of mine Kurt Amacka and I’d read some of his stuff and like it…he just suggested it and we thought, why not? It was his idea to do the Kickstarter too, he thought it would be a nice idea as it brings the fans closer too…we’ve been doing Skype calls and people can immortalize themselves by being inked into the comic. We thought it was quite quirky so we decided to go with it!

Is crowd-funding something you’d consider to fund a record?

Yeah, it was a real learning curve because there are so many things behind the scenes that have to get done. You’ll see the final total and it’ll look great but we have all the distribution and postage and all manner of associated costs. There are loads of things that come up…Amanda Palmer, from the Dresden Dolls, she raised over two million dollars which is great, but she was putting up things like ‘I’ll come and play in your living room’, which is something we’d really struggle with. Even just the fifty Skype calls and the time in the studio with my ‘local’ band, Devilment, as well as Christmas and preparing for the tour and everything else going on, it’s been really hard. It’s a great idea but you’ve got to be prepared for a lot of hard graft. Then there’s things like finishing houses, we’ve learnt the hard way that you need to have a finishing house (someone that will deliver your stuff) in Asia, Europe and the States: we end up pricing ourselves out of it. Even though one hundred and fifty dollars gets you a comic, a shirt, inclusion in the booklet, your name in the credits, a Skype call, a voodoo doll, constant updates and a PDF download ahead of everyone else, people still complained because of the postage costs on top. We could have avoided that kind of thing by thinking ahead and getting some more finishing houses on board which, in itself…coordinating that is another job.

In August, you’re returning to the UK for the new festival Alt-Fest, how does it feel to be headlining at one of the most exciting new UK events?

To be honest, I don’t know much about it! It looks a bit goth-heavy for me…but yeah, it is exciting because it’s new and I actually quite like a lot of the bands that are playing so far: I think it’s quite a novel idea. It’ll just be interesting to see how they compete metal wise against Bloodstock, which has such a good lineup, preceding it by a week. If they get another great band on our day, it would be awesome.

Do you have any other appearances planned?

Yeah, a big festival in Canada that I can’t tell you about yet, a Russian tour…originally, we were going to write the album this year, which we are going to do, but we also decided to come out on tour. We’re looking at doing some more live dates now, just because we’ve got a bit of a bug for it, and it’s actually helping creativity so, with that in mind…it’s good to be out and about anyway.

Considering this is your only UK date of this tour with two of extreme metal’s biggest bands, do you feel that says something about the state of the genre in the UK, especially compared to what seems to be a thriving European scene?

I don’t know…I’m not really that big on the scene here anymore…I don’t know why but we haven’t actually played England that much and I don’t know why. A lot of people say it has something to do with that incident at Bloodstock, which was just a few stupid people.

Some people were throwing huge gobstoppers and managed to put our guitarist in hospital…nearly hit this kid that we’d invited up on stage who had spina bifida because he couldn’t get out the way: some guy threw seven of them, they were huge. 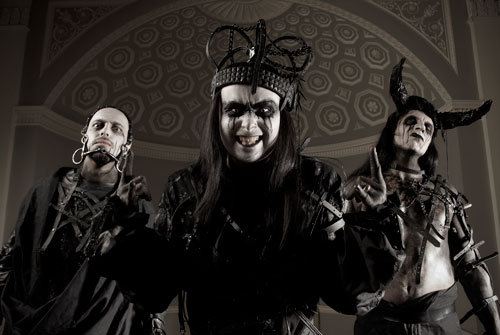