Let’s keep the genitals out of it…

Following the release of their acclaimed debut album 1917 and last year’s successful Pledge Music campaign, 31 March 2017 saw the release of Courtesans new EP, Better Safe Than Sober. Here, the band talks to MR’s Jason Guest about the band, the EP, their music and why you need to keep your genitalia out of it…

Can you give us some background on the band, how you formed, and what it was that drew you together to make music under the name Courtesans?

We met in a strange chain of coincidences followed by some dark web surfing. Our formation doesn’t follow widely expected (some would say the only righteous) path of playground friends getting together in one’s mum’s garage to play instruments badly and one day shooting to fame and glory. To keep a long story short, we met via different musical/artistic projects as fully grown adults (mark that we didn’t say “mature adults”) we fell in love with each other as friends and decided to do music together. Us four are very different but equally strong personalities which could be a recipe for disaster and never ending arguments yet we are as tight of a team as a Sunday cyclist’s spandex.

A musical vision not so much which is possibly the reason why we do not fit squarely into any particular genre, for us it was always a case of creating a vibe and an atmosphere, music is a feeling – whether good, bad, happy or sad. There have certainly been some cinematic influences in what we have recorded but overall the concept has always been to convey a feeling, for us and the listener. Our writing we believe is developing all the time and what we are doing now has more of a raw feel compared to where we started.

Our lyrical influences mainly come from our own experiences but also from an omnipresent media, books and life stories of other people. Musically, every one of us grew up with a slightly different sonic tastes and influences – grunge, punk, metal, hip-hop, classical, ecclesiastical even… too many, and as we adopted ‘social democracy’ as our primary political system in the band you can hear all those flavours packed into our soundscape or “soundcake” if you prefer.

When writing the material for what would become Better Safe Than Sober, did you have an idea of how you wanted it to sound, or did each of the tracks and the whole thing take shape as it was being developed?

Our creative process always has been a form of “controlled chaos”. Every single one of us is free to bring something to the table. It reminds us about an interview with Puscifer we watched quite recently. It seems they work in exactly same way as we do and that in exchange produces music that is hard to pigeonhole. Some may say it creates something discordant and weird but we see it as a good thing!

We worked on Better Safe Than Sober for most part of a year, there’s been more changes than Agnes drinks beer, which if you follow up you will find out is a lot!

Can you tell us about the themes on Better Safe Than Sober and where you took inspiration from?

For us in the band, the world has become a very strange place, certainly at odds with our morals and how we see things. We are humanists and caring for others, other species, the world and the environment is at the centre of our lives, we actually prefer not to look after number one but like to do what we can to help numbers two, three and four. Isolationism, self-absorption, shallow perception of beauty, obsession with material possessions and ultra-right wing views seem to be going stronger than ever in our lifetime like we haven’t learnt anything from history. It is deeply disturbing for us to observe those trends on the rise. In a few words – BSTS is a concoction made of a dark matter scraped from the deep corners of the world’s laundry basket.

Better Safe Than Sober is far more personal, dark and raw! The band on BSTS is much more confident, angry and outspoken (this seems to be an ongoing trend so “dog help us all” for the next album… Oops, spoiler alert).

What does the act of making music mean to Courtesans?

It brings us closer as friends, helps us deal with our demons, it is our anger management therapy and interpersonal communication/compromise course. In other words – music is our lifeline! 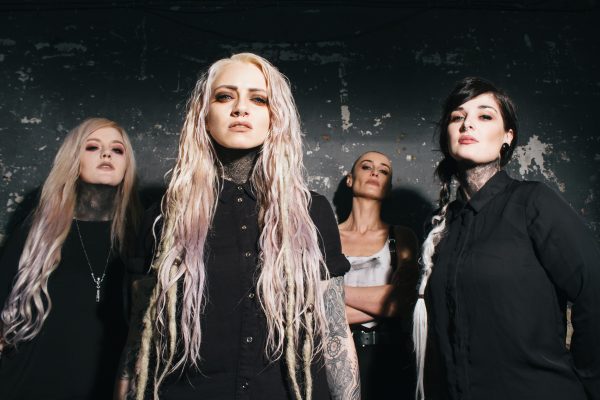 In the promo material accompanying Better Safe Than Sober is the following: “We want more women to pick up instruments. Be musicians, tour managers, sound engineers and say f**k it! Don’t leave it up to the boys, but do not dumb down your femininity to be respected, be yourself and be free! We want to not only encourage women in music but for more men to accept that it is ok to look up to female artists.” How do you manifest this mission statement in your music and performances?

We are the living manifestation of the aforementioned “mission”! We are undeniably women, we write and record our music, we always look for and welcome female crew members, we love to play our instruments (some say “badly” but we don’t give a flying fuck as long as people enjoy our music and lose themselves in it). We live by what we preach!

Though rock has long been considered a “masculine” genre, there have been numerous female musicians and bands that have challenged this ideology yet it remains primarily male dominated. How do you feel about this attitude to women in rock? Do women have to work harder to gain credibility in this male-dominated genre?

Rock and metal are still very much male dominated genres and yes, we do have to put the extra work in because if we just sit back and keep our eyes shut nothing will change. Unfortunately, the movement for equal rights across all areas of life is still very much an ongoing battle not just for us in the western society but globally.

Is it possible to challenge, to disrupt or even to restructure this long-established symbolic order?

It is not only possible but necessary in order to create a better, more balanced society. Persistence and non-aggression is the key, we believe. Binary works only for computers.

With that in mind, what’s your take on the “female-fronted” genre tag or the “all-female” addendum that have proliferated in recent years?

Those labels are completely unnecessary and even though we used “all-female” once to describe ourselves we soon realised that it has an extremely detrimental effect on the battle for full gender equality. Do you ever hear “all male fronted bands night in Camden” or “check out this all male band, Machine Head” – no, It’s ridiculous so let’s keep the genitals out of it. It’s time to evolve beyond gender in any aspect of life (apart from the offspring producing area perhaps)! After all someone’s personal identity and gender does not always correspond with their birth sex so it’s time to cut this bullshit!

Early days I know as Better Safe Than Sober is yet to be released, but what does the future hold for Courtesans? Is there more music in the works?

Oh yes, we are currently working on new material for a second full length album. The plan is to have it completed by the end of October 2017. We already incorporated a couple of new tracks in our live shows to a rather enthusiastic reception which is amazing!

Any upcoming gigs? Will we be seeing Courtesans in or around Birmingham any time soon?

The nearest one would be Manchester at The Ruby Lounge on the 1st of April (this weekend) then we are heading south, to Brighton on the 5th May Full list of gigs here.

What would be the ideal setting for a Courtesans performance?

Literally anywhere as long as it has PA with enough bottom end in it.

Always buy a bigger bottle than you think you need, better to be safe than sober! 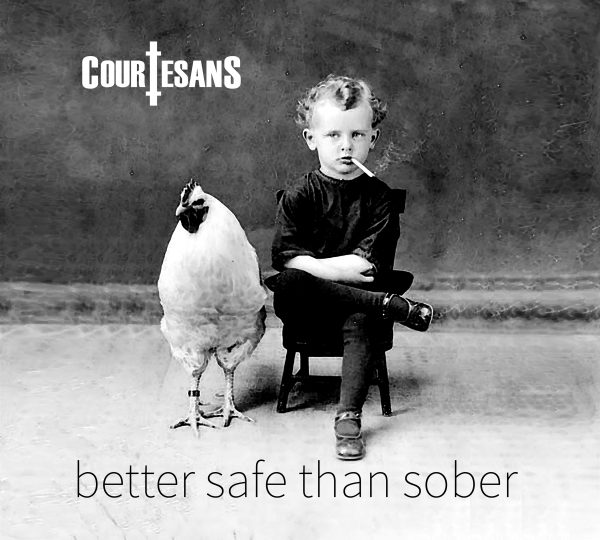