Recently on tour in the UK with Gojira, Car Bomb blew audiences away with their new album, Meta. Comprised of riffs-that-shouldn’t-work-but-somehow-do-juxtaposed-with-riffs-that-really-shouldn’t-make-sense-but-do, it’s an album that you’d think would be impossible to play live, but no. They did it. And they did it very well. And so MR’s Jason Guest thought he would investigate a little further and spoke with Bassist Jon Modell about the band, their albums, working with Gojira’s Joe Duplantier, Suffocation’s Frank Mullen, their DIY ethic and movies and Warp Records…

Thanks for taking time out for this interview. Great show with Gojira in Birmingham recently! (review here)

Thanks! Great tour for all of the bands. Everyone crushing every night!! A real honour to share the stage with those giants.

The band originated around 2004 and Centralia was released in 2007. Ten years after your first release, how has the band evolved since then? How does the band of today compare to the band of the early days?

We actually started in 2001. The evolution has been even longer. Our music has become more mature. More structure and fluidity to our songs. We have also grown as people and have a greater understanding and respect of each other. Elliot and I have been playing together for about 25 years and Greg and Mike had been playing together for about 20 years (on and off). But outside of those two groups, we have grown to really get to know each other. The good, the bad, and the ugly, so to speak! It makes for a more functional band. And you can’t spell functional without fun!

How long were you working on the material for Meta? And what changes did it go through during that time?

According to Greg, the earliest date on ‘Nonagon’ (the first song written for Meta) is back in 2013. And things were still being tweaked up to and during the recording process. Greg is big on writing something, letting it sit for a bit, and then revisiting it months later to see if it still holds up. It’s a great way to see if an idea is killer in the moment or truly killer. So, there was a lot of that going on.

From Greg – “I knew generally the direction of the album, which was to simplify our ideas and make them ‘identifiable’ somehow. I wanted to make each song sound unique from the others yet still have some emotional weight to them and our sonic signature. I also knew we needed professional help, hence the decision to enlist Joe Duplantier and Josh Wilbur.”

It’s a natural progression from w^w^^w^w. Songs like ‘Lower The Blade’ and ‘This Will Do The Job’ hint towards the direction we were moving in. You can hear that in songs like ‘Gratitude’ and ‘Lights Out’. We still have our crazy disorienting songs, like ‘Sets’ (and ‘The Seconds’ on w^w^^w^w) but there is definitely more structure to our material now. In addition to the songs themselves, the production on Meta is a huge leap forward for us. Taking our hands off of that responsibility and placing it in Josh Wilbur’s very capable hands was 100% the right move to make. I’d love to let him remix w^w^^w^w.

What are the lyrical themes across the album? And what inspired them?

From Mike – “Lyrics cover topics like self-redemption, drug addiction, the simulation hypothesis, religion, death and loss, geometry. I don’t usually like to discuss the exact meaning of the lyrics because I want people to interpret the songs and the meanings for themselves. Sometimes the meanings are really obvious but for the vague stuff I like it better if people find meanings in the lyrics themselves”

Gojira’s Joe Duplantier appeared on 2012’s w^w^^w^w and co-produced Meta. How did you come to work with him? And what did he bring to Meta?

Joe has been a close friend for a decade now. He lives here in Brooklyn with his wife and kids and Elliot and Joe co-own Silver Cord Studios. When it came time to do Meta, Joe was a natural choice to utilize as a producer. He has such a great ear for structure and overall feel of a song. Musically, he didn’t touch much on Meta. He had a few suggestions here and there, like ‘maybe shorten that’ or ‘maybe extend that’. His biggest contribution was to Mike’s vocals. He really encouraged Mike to sound like Mike and not like Chino or Max Cavalera (for example). Mike has such a great voice and Joe has such a great ear. It was amazing to put those two forces together.

Frank Mullen of Suffocation also makes an appearance on the album, delivering an incredible performance on ‘Sets’. How did you come to work with Frank? And what did he bring to the track?

Frank is also from Long Island. I’ve known the band forever. I was actually at the first Suffocation show ever (amazing). Greg and I saw him out a gig and just asked him if he would be interested in appearing on the record. He was very receptive to the idea. It’s pretty much as simple as that. And as far as what Frank brought to the track? Are you kidding? It’s Frank Fucking Mullen. The heaviest shit ever! That’s what he brought!!

Centralia, w^w^^w^w, and now Meta. Album titles for Car Bomb are very different to the usual. Why Meta?

From Greg – “We’ve always tried to keep our album titles away from any specific thematic or symbolic references (except for Centralia, which we’ve never been happy with as an album title.) I’m a huge advocate of the purity of form and design, and how words can often backfire and ‘box-in’ a piece of art. w^w^^w^w is a way more visual album title than anything else and references a pattern in the album. The word Meta to us means something that is self-referential, and recursion is a huge theme in our music and artwork. “

The artwork for this album was influenced by Kubrick and the movies mentioned below. We love geometry, symmetry, and recursive patterns. We’re also very inspired by electronic album covers from Warp Records. The cover for Meta is heavily influenced by Autechre’s “Untilted” who are on Warp. 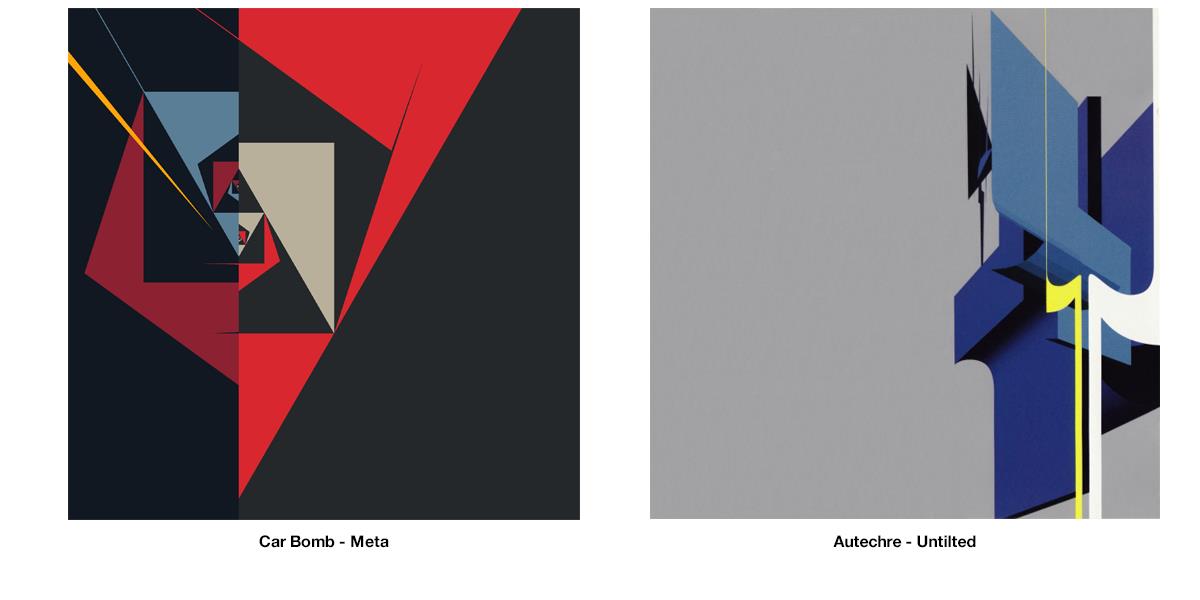 Who is the artist?

Greg does all the artwork for the band and has since day one. The visual art truly embodies the audio art. Even though we are in a crazy metal band, we aren’t evil. As such, the evil imagery doesn’t really work for us. We all feel that the abstract art that we lean towards is such a great match to our music.

Car Bomb was signed to Relapse Records for a while but you now release your material independently. What are the pros and cons of releasing your own material?

It’s a huge responsibility to do it yourself (many day-to-day daunting tasks) and your reach is nowhere near as far as a label such as Relapse. We utilize bandcamp for the physical release and CDBaby for digital (to get it on iTunes, Spotify, etc.). However, as the control freaks that we all are, we get to do everything just the way we want to do it. Plus, you get to keep all of the rights to your music. Obviously, all of the financial responsibility falls in our lap, but we all work for a living, so that’s not really a big deal.

We have made mistakes and continue to learn from them. For example, we hired a PR firm to promote Meta a few months before the release here in the US and we hired a UK firm to promote the Gojira tour. We had done PR on a much smaller scale for w^w^^w^w and really now see the value in doing it the right way.

One of the biggest cons that we have run into is shipping costs overseas. It has to be a deterrent to fans to pay so much money just to have our music shipped to them. That’s one area where having a label, with distribution plants across the world, would really help.

In an interview I read elsewhere, the likes of Aphex Twin, Warp Records and Radiohead’s Jonny Greenwood were cited as influences. How have they influenced the band’s music and its approach to composition?

From Greg – “These artists broke new ground in music by experimenting with different tools and techniques. Yet while discovering new ways of making sounds they somehow managed to sound like themselves AND also write tons of great songs. Those are huge artistic principles that we aspire to. We’re never afraid to experiment as long as in the end it serves the song.”

Other than music, are there any other influences for the band and your music?

As far as non-musical influences we’re all big movie fans. Not necessarily the stories, but the visual aspect of them and the tones they invoke. One of the songs on the last record, ‘Third Revelation’, was based on lines from the movie There Will Be Blood. We’ve always been big fans of any movie from Stanley Kubrick (‘This Will Do the Job’ was inspired by 2001: A Space Odyssey.) This album was partially influenced by movies like Beyond the Black Rainbow, Ex-Machina, and The Holy Mountain.

Early days I know as Meta has just been released, but what does the future hold for Car Bomb? Do you have more shows planned? Is there more music in the works?

Now that the Gojira tour is over, we are in full writing mode. We are hoping to get back into the studio towards the end of this year/beginning of next year. We are coming back to Europe in late September for Euroblast (in Cologne, Germany) and are going to play about 3 weeks of dates around that. We also are going to play locally this spring/summer to stay in shape.

Thanks again for giving a shit about Car Bomb. Meta has opened up a ton of doors for us and has introduced us to loads of new fans. We’d just like to thank everyone who has taken the time to show an interest in us. 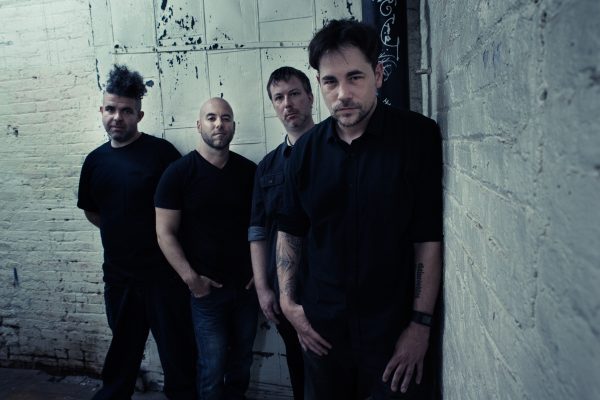