Having been added to the Bloodstock line-up, Bast’s Primal Om spoke to MR’s Jason Guest about future tour dates – including a yet-to-be announced Midlands date! – the re-release of their album Spectres on vinyl as well as the advantages of both digital and vinyl over CDs, how the band have developed since their inception in 2008 and the impact of their influences, the UK metal scene and gave us a list of bands that you should be aware of…

Thanks for taking time out for this interview and congratulations on being added to the Bloodstock 2015 line-up! Will you be staying for the whole weekend? Any bands you want to see?

We’ve been to Bloodstock as patrons many times so will definitely be sticking around for the whole weekend to have fun and watch the bands. So far, of the line-up that’s been announced, current highlights include Agalloch, Death, Godflesh, Conan, 1349, Orange Goblin, Dark Angel and Napalm Death.

Any plans for more shows in the UK this year? Coming to the Midlands?

The main performances we’re looking forward to in the UK this year are our festival appearances including Bloodstock as previously mentioned, as well as Incineration Fest in London, and Red Sun in Cardiff. We have a few one-off shows booked around the country, including one Midlands date at present, but it’s yet to be announced so you’ll have keep your eye out for that one!

Your first album Spectres was released last February and has recently been released on vinyl. How do you view Spectres now, a year after its release?

We really couldn’t be happier with the way it sounds – it’s as close a representation of how the songs sound live as we could have hoped for. As for the reception, we hear a few kind words about it now and then, a year on. It’s certainly nice to see people still as passionate about it as we are.

Which format do you prefer: digital download, CD, or vinyl?

I’d say that we take advantage of both digital and vinyl, with CDs falling by the wayside since downloading and streaming became more prevalent. All three of us have extensive vinyl collections as there’s something undeniably appealing about the physical connection with the record itself, having an actual presence and relevance in the experience of playing the music – sitting back studying the artwork and reading the liner notes. When designing the artwork for Spectres, I definitely had this format in mind. 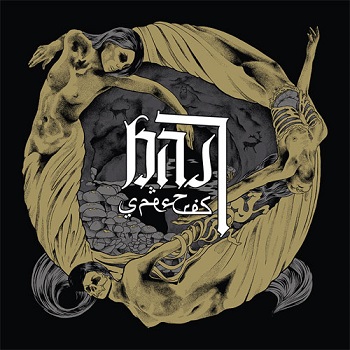 Can you tell us about the incredible artwork? What do the figures represent?

The artwork represents the more literal aspects of the concept as described in the lyrics. The figures being the ancestral Spectres the protagonist finds whilst traversing a cave once inhabited by his forefathers, adorned with ancient paintings and filled with unknown roots and mushrooms. As mentioned above, with any physical release it’s always great to have a strong connection between the artwork and the lyrics (written on the inner sleeve of every format), so the main aim was for these to complement each other.

I take it you’re working on new material. How’s it coming along?

The new material is well under way. We’re pleased with the initial ideas and the significant start we’ve made on one track in particular – we’re currently deciding on the right time to start rolling out some new material at live shows. With Spectres, we ended up sitting on the tracks for a while before taking them to the studio, which allowed time to emphasise particular parts or add embellishments here and there, so I think we plan to do the same this time around; We certainly don’t intend to rush anything out before it’s ready.

How does the band write? Do you have ideas of what you want the tracks to sound like or is your approach more organic?

The writing process tends to begin with a casual chat about a concept that will run throughout the collection of songs, which will dictate a narrative pace of sorts, and at the very least, a starting point. From here the compositions are generally pieced together on the guitar, and then jammed out as a band – most of the dynamics and nuance occurs here when the drum, vocal and bass parts start to develop.

Spectres was a concept album. Do you have a concept for the next album? Can you tell us about it?

We’ve been discussing the concept to a follow-up since we finished recording Spectres, and currently have a fairly clear idea of the story we’re trying to tell. I can’t mention any specifics yet, as with anything in its initial stages, it may unexpectedly change altogether.

Despite gaining a lot of experience on and off stage over the last few years, as well as recruiting another member, I think the band is largely the same at its core. When we started our aim was to simply write some honest, heavy songs to perform in front of as many people as we possibly could, and that’s still our mission statement – the new material we’re writing still has echoes of our early ideas and experiments we were messing around with at the time, and I don’t imagine this will change in the near future.

Bands are finding it increasingly difficult to survive, particularly in an age where sales are down because of illegal downloading. How does a band survive in such an era?

The process of producing our record – from writing through to packaging and distribution – had to be a labour of love on the side of both the band and labels. In a sense I think this has always been the case for smaller, more underground operations such as ours, and if anything, the ease of sharing information including music, freely or otherwise via downloading, has been somewhat of a boon in spreading the reputations of many bands and labels alike. Audiences are now able to cater their individual tastes more specifically, creating greater interest in niche genres, as well as broadening potential touring locations, attendance at live shows, and in turn, the sale of physical media.

We all have full-time jobs to help fund our transport, rehearsals and recording, so in this way it’s easy for us to survive (though the regularity of our output and dedication to touring may suffer). Illegal downloading poses a much greater threat to larger bands who attempt to do it full-time, which requires a more significant leap of faith (and funding) from bigger labels, based presumably on factors such as record sales. I have no idea how many of these bands survive, and I have the utmost respect for those that are able to keep their heads above water!

Who are the band’s main influences? Is that a hint of Pink Floyd’s ‘One Of These Days’ I can hear on ‘Psychonauts’?

Prog is most definitely an influence – bands such a Pink Floyd, Jethro Tull, Can, Amon Düüll II etc, alongside the more extreme influences of Death Metal, Grindcore, Doom and Post-Rock. To name three bands from the top of my head, I’d have to say Neurosis, Sleep and Ulver, but there are far too many to mention. The band is basically just a melting pot of all the music we love.

Do those bands still have an impact on the band today?

Our music tastes are still as varied as they ever were and we still feel there’s a definite link between what we started doing and what we’re doing now. I’d definitely say we’re influenced by the same bands; the list is just growing all the time.

What’s your view of the UK metal scene?

The underground metal scene in the UK seems to be thriving – lots of varied bands with individual sounds, carving their own paths up and down the country. It’s a fairly tight-knit group, and everyone is always very accommodating, both audiences and bands. The size and accessibility of the UK makes it easy to visit every corner and reach as many people as possible!

Any bands that we should be aware of?

Above all else you should stop what you’re doing immediately and go listen to Finnish experimental black metallers Oranssi Pazuzu and the technical mastery of Latitudes. Also, check our good buddies from Ghold, Ophiuchus, Three Thrones / Jøtnarr, Icosa and Tides Of Sulfur – some of the UKs more interesting up-and-comers.

Thanks for talking to us and to anyone who’s taken the time to read our responses. If you’re curious enough to give us a listen, we hope you enjoy. Make sure to come say hello if you ever make to a show!