“The writing talent we have now is the best we have ever been…, so the sky is the limit.”

Scorpion Child arrived in Birmingham as part of a co-headline tour with Monster Truck, so Peter Keevil took singer, Aryn Jonathan Black, aside into the shower room (it’s the venue’s quietest room, honest) for a chat to discover the latest changes in The Child camp.

Welcome back to the UK Aryn. You did your first UK tour just last November, why the quick return?

Just to back-up and consolidate what we achieved last time really. Make sure people know what we do and who we are. That we have spread our wings. We hope to come back in another 6 months from now.

Sure, we are sharing the closing spot but we only get 4 and they get 5, so it’s a defeat for our side (laughs).

The UK is quite small compared to Texas and the rest of the States. How does it compare?

I see the UK as similar to the East Coast, lots of large cities close to each other, so that’s cool. The travel is easier and cheaper, despite the price of fuel over here. A 2 or 3 hour drive between shows is great and we reach a lot of people.

Like Monster Truck, you are touring your debut album, which is an awesome slab of classic hard rock n roll, drawing from the past but brought slap bang up to date for the 21st Century. How do you look back at it now?

There are elements of naivety; every time you go into the studio you learn something new. It’s marked where we wanted to start. We now have that foundation, that platform from which to grow. The ideas we have now, especially as a 4-piece have moved on. The writing talent we have now is the best we have ever been, so the sky is the limit. When we do the next album we will be thinking of the live production too. That such an important part of our presentation, so we want to take that into the studio, they are independent but need to work alongside each other. When you see a band live, I don’t want to hear the CD. Why did I just pay this money for it to sound just like the CD.  I may as well have stayed home.

When we record I want to be able to play it live but for it still to be a performance.

Is that a challenge now that you are a 4-piece?

No, not really. We had two guitarists but they weren’t in sync. It was always too muddy. Now Chris can control how the guitars work, he doesn’t HAVE to worry about another guy’s interpretation. In the studio Chris knows better than anybody what complementary guitar he needs. He can double-himself better than anyone. The demos we have done, sound great. Live we can play the bass off against the guitar and it works. It’s great.

And Jon is such a superior drummer, better than what we have ever had before.

It sounds like you are in a much better position now. Were there conflicts before?

Oh yeah! Not with Tom (Frank, guitarist), he’s one of our best friends. He just had family commitments. But our drummer, yeah. We had real differences! Everyone gets along really well now. With Jon, we don’t have those differences.

We do get apprehension coming back to Europe as a 4-piece. People don’t appreciate that we are the same band, just better.

You sound like you are talking like a producer… the way you talk about the types of sound that you want to achieve in the studio compared to the live experience. I noticed during your sound-check the attention you were paying to every part. It sounds like every event matters to you.

Yeah, you have to look at every part, every element. It’s so different, even though they save it all on the desk, when the room fills it’s so different. It’s difficult, over here we don’t have our own sound guy, we use the venues’ sound guy and he doesn’t know us, so we have to spend more time getting it right. This is what we do. 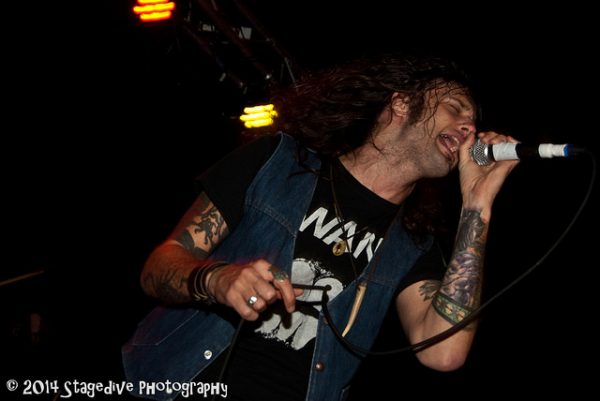 What’s the impression you would like the audience to take away from a Scorpion Child gig?

Just like “What did I just see?!” I love that, the uncertainty of what you are going to witness. Making people a just little uncomfortable but with an air of familiarity, I guess.

The four of us are on such a good page together right now, we just black out a little we get lost in the show. We like to free-form a little, not have it too locked down.

Do you get the chance to sample the delights of the towns you play in?

I got to pick up some great vinyl today. Hawkwind, ‘Silver Machine’, original vinyl, just across the road (The Diskery).

But now you can’t play it until you get home and customs will think you’re trying to smuggle it in.

Oh, we have a ‘good suitcase’ for this type of thing (knocking the hollow wood sound of the door frame), so we’ll be ok (laughs).

And I know about Birmingham being the home of heavy metal…

Does Austin (Texas) have a ‘scene’?

Oh, we have a couple of dead guys… Stevie Ray Vaughan, so yeah.

You are on Nuclear Blast, do you feel you have benefitted from their expertise? Do they know their shit?

Oh yeah, they know their shit. It’s an interesting label. I think a lot of others are taking their lead about signing blues based rock bands.

Do you recognise the revivalist blues-rock movement?

Yeah, everyone’s doing their own thing. Rival Sons are doing the Californian blues thing, Aerosmith, Zeppelin. We draw on punk and psyche and stuff. So there’s variety.

Ok, some quick fire questions for you to finish on… Don’t think just answer!

You’re from Texas, so Beef or Oil?

Do you mean, Gas? Not cooking oil?

Well I need oil to get me to the next gig. So Oil.

Germany. We’ve played there so many times. It’s the home of our label. But I love the UK too.

But that’s just pointing out the difference, not choosing…

I know, I need to pick everything apart man. I’m actually going to a Monster Truck show, so I’ll let you know after then.

Thanks for your time. You can soap up now.

Thanks man, it’s been fun.