Thanks for taking the time out to speak to us ahead of your European Tour supporting the mighty Annihilator. If I’m not mistaken these are your first dates in Europe, yes?

These are our first dates outside of Australia! We have never left our home country and were taking a pretty big step covering most of Europe in 6 weeks. We are pretty happy to be coming to the UK first and playing to an audience that have the best chance of understanding a word we say. We like to tell a few jokes, and I don’t know if they will translate well at all.

How did you get the gig with Annihilator?

We asked nicely. They put an add out late last year looking for supports, most likely to spread the cost of the tour buses, so we applied and after a few emails with Jeff he offered us the spot. He said it might be cool to get an Aussie band, and we are completely ok with being taken along as a gimmick. 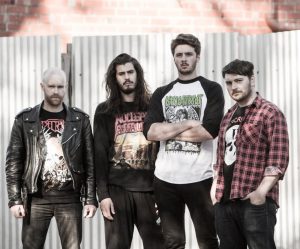 Is Annihilator an influence on the band?

To be completely honest, not really, in the same way that Megadeth and Anthrax don’t really influence the band, as much as they may influence us as individuals. Annihilator are great, their new album is tough as fuck, but they’re not something we draw on when forming our own.

With the sheer amount of travel that has to be put in and all the logistics, what’s it like to put together tours in Australia?

A fucking nightmare. We are Melbourne based, and to play in Adelaide and Sydney (Canberra can be ignored so far as we are concerned) it’s a 10-hour drive. To play Perth is a 4-hour flight, and the scene there is pretty small. You have to know what venues will actually put on metal gigs, and trying to line them up back to back to make the travelling worthwhile is a whole new level of pain. Its costly, tiring, and stressful, but it’s a lot of fun, and we are Australians… driving obscene distances is just something we do.

How does that compare to joining this tour with Annihilator? With the dates in place, was most of the work done for you?

Everything was done. Everything. We just had to get together our documents and payments. Annihilator aren’t new to this game and Jeff is very hands on, so he had everything lined up, we just have to get ourselves to Frankfurt and let the tour bus do the rest.

Are there any plans for a Headlining European Tour in the near future or a run of festivals perhaps?

Plans no. Intentions yes. We are cutting our teeth on this tour, and if things go well we will come back. Hopefully several times.

If there was one Festival that you could pick to play anywhere in the world, which one would it be and why?

That’s a really difficult question to answer because the concept is so alien to us. We have festivals down here, but nothing on the scale you guys do, and asking us to pick one is like asking a starving man what roast animal he wants to eat.

With your excellent new album just released, what can fans expect from Proliferation?

45 minutes of thrash metal. It’s angry, it’s hooky, it’s got some shred, and it’s got some groove. It’s not bad, you might like it.

How hands on were the band in the studio? How involved were you in the engineering / production aspect of the album?

We were much more involved in the sounds and styles on this album than we were on our first release. After ‘Origin’ we had a lot more of an idea about what we wanted to sound like, and how we wanted the songs to work, and overall ‘Proliferation’ came out a lot closer to our album goals than the previous works. We were lucky to work with a good engineer and producer, and have very clear visions about what we wanted. We are pretty happy with how things are going sound wise.

Writing for album 3 has begun, but with everything going on at the moment, we are focussing more on promotion, press, tour prep, etc. We do have a very solid idea about what we will do on the 3rd album, and before anyone gets worried, it will still be thrash, but we will likely revive some of our earlier elements, and try out a few new ones.

Recently you guys signed with Metal Blade to release Proliferation worldwide, I know it’s in the early stages of your relationship but how has that been working out? How different is it to your previous experiences?

It’s going really well on our end! They are a pretty disgustingly helpful and supportive label, and it’s awesome to know we are in good hands, and getting the best possible people to work with us for all the things that we have no idea about. Hopefully we actually make them some money, because we would love to keep this going. 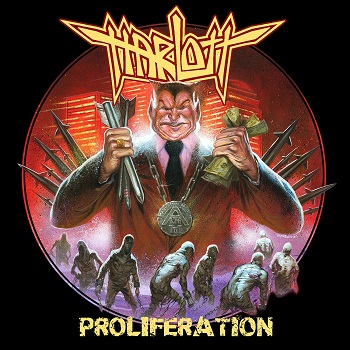 What modern bands get your head moving these days, I know there’s so much music coming out these days it’s hard to keep up with everything, but is any of it making you sit up and take notice?

It is impossible to keep up. So much talent in this world, and some fucking gems are coming out of nowhere. Lately we have been digging Mortal Strike from Germany, Nuclear from Chile and Homicide Hagridden from Italy. Also Guillotine reformed and released ‘Blood Money’ and it’s the fucking best.

What’s the thrash scene like in Australia? Are there any other Thrash bands coming out of Melbourne or Australia that we should be paying attention to?

Please keep an eye out for Desecrator and In Malice’s Wake. Both of those bands absolutely slay, and they work fucking hard. If you can find anything of theirs, buy it and enjoy it. You won’t be disappointed. There’s a lot of talent in Australia and you can get a bit of anything you want. But for Thrash, it’s those 2, and you should try Malakyte, Mason, Alkira, and Hidden Intent.

What does the future hold for Harlott? Where would you like to see the band developing to in the future? Or is it just a case of enjoy everything you are doing for as long as you can?

It’s very much a make hay while the sun is shining situation. We were always going to do these things out of love for Thrash, and at the moment it seems to be going really well, so we may as well enjoy the ride and keep playing the music that we love.

It’s been great talking to you. Have an amazing Tour and can’t wait to see you playing in October. Any closing words for our readers?

Come check us out and have a mosh. And if you like it, buy us a beer, tour buses are fucking expensive.