“I prefer my music to be organic, energetic and able to breath…”

Hi Alexander, ‘Next Stop’ is the second album from Sonic Station, has it turned out as you hoped and originally envisioned?

Hi Woody! Yes, I’m very happy with the result. I wanted this album to get a heavier sound than the first. And I also wanted a more unified sound than on the first album. Fewer musicians and singers and a faster recording process (the first was recorded on and off over 7 years) was important in that matter.

Your first album was on Frontiers Records, your second is through Avenue Of Allies – how did you hook up with the new label and what’s your experience like working with the label?

Robert Säll from the Swedish group ’Work of Art’ told me to contact Gregor at Avenue of Allies because he had heard a lot of good stuff about Avenue. I’m very happy with our cooperation. It’s a smaller label and I got a good and personal contact with Gregor.

I love the fact that Sonic Station plays out and out west coast AOR. When a lot of current AOR bands try to modernise their sound they sometimes lose the essence of what most fans like about the genre in the process. It’s refreshing for a band to just give us a pure AOR album but do you find it hard to push your music to a wider audience as AOR isn’t an accepted mainstream genre anymore?

The basic idea was to do a ’retro album’. I’m not a big fan of modern AOR/Melodic rock/rock bands that only use programmed drums and have an over compressed sound. I prefer my music to be organic, energetic and able to breath with a lot of headroom.

Of course I know it’s hard to reach out to a bigger audience with my type of music but I honestly do believe that it’s better to do a real retro album with an attempt at a warmer sound that I think most AOR fans recognise and like, rather than just join up with everybody else that sound the same.

The AOR genre will probably not be as big as in its glory days in the 80s but hopefully it could hold on to a relatively big fan base that helps it to stay alive and well!

Can you talk to us about a few of the songs on ‘Next Stop’?

One of my favourite tracks is ’Catch me if you can’. When I was around 13-14 years old and really got into the guitar playing one of the most popular bands was Soundgarden. I’m still a huge Soundgarden fan and “Catch me if you can” is my homage to them. It has that typical drop D guitar riff around the pentatonic scale. I AM AWARE that grunge is a big ’No No’ in the AOR world – but I stand tall. And personally I don’t see Soundgarden really fitting in to the grunge label.

I wanted a live feeling to the guitar solos so I only delivered a few takes. Of course being the perfectionist I am, there are a few notes that I could have played differently but I am pleased with the general feeling in my playing – the expression and the sound of the guitar is exactly as I wanted it to be.

I think ’Broken man’ also stands out on Next Stop. I’m I huge sucker for ballads. My original idea for the groove was actually inspired by a rather rare song with Peter Cetera/David Foster called ’No Explanation’. But when Sonic Station drummer Thorleif put his teeth into this song he came up with the idea to do it with the famous Toto ’Africa’ groove (even though he mentioned ’The Other side’ from the Toto album ’Kingdom of desire’ as the influence). And I’m really happy with the result!

I love female vocalists and I really enjoy Marika Wilstedt’s contributions on ‘Next Stop’. How did you start working with Marika and on an album that features Johan Boding as lead vocalist what were the deciding factors on having Marika sing lead on a couple of tracks?

Marika is my co-founder of Sonic Station so she will always have her songs and her input on the records we make. We met when we studied music at the Royal College of Music in Stockholm in the mid 00’s. We both had an interest in the slick West Coast music and started to write some songs together that finally became the Sonic Station self titled debut.

Marika is a very busy studio and live musician (she also plays piano and cello) in Sweden so on this record she only helped out with co-writing one song (’Brighter after dark’). But she gave me a lot of input on the other songs and came up with small details that made a great difference. She’s essential for the Sonic Station sound.

Would you consider writing an album in the future which features Marika as the lead vocalist?

I like a male voice in the AOR genre, so I think it will be Johan and Marika singing the lead vocals for Sonic Station in the future!

Do you plan to play live shows with Sonic Station, especially here in the UK?

Nothing decided yet but we sure hope that we will be able to come out and play after this record has reached our fans!

Sonic Station is a relatively new band to most fans, what are you plans for the future?

Right now our focus is on promoting the this album but I’ve already started to write some new material. But it’s a long process to come up with ten good songs so it is difficult to say when we will be ready for recording a third record.

Thanks for your time Alexander, is there anything else you’d like to add?

We are really satisfied with the new album so I hope a lot of people out there will find it! 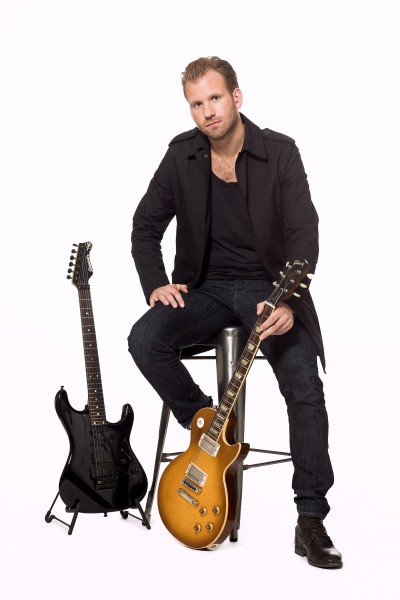