Sex and death, Eros and Thanatos, the creative and the destructive, rebirth and death…

With their latest album, Children of the Night (reviewed here), released in late April, Tribulation delivered another incredible piece of work that saw them reaching deeper into exciting and innovative musical territories. Here, Adam Zaars talks to MR’s Jason Guest about the new album, its themes, its production, the band’s development in the past two years as well as what metal has become and the myth of the rock star…

Hi Adam. Congratulations on The Children of the Night. It’s a remarkable piece of work!

In my interview with you in 2013 (here), you said that in terms of recording, it was six years between The Horror and 2013’s The Formulas of Death. Here you are two years later with The Children of the Night released. Were circumstances different this time around? And how did they affect the writing of the album?

A lot different actually! When we wrote most of the music for Formulas we were spread out in different areas of Sweden and Jakob wasn’t even in the band at that point. Now we all live in Stockholm and Jakob is as much a member of the band as any of us and we’re much more of a proper band now. That also led to the album being composed by more people than just me which was more or less the case on the previous album. Jonathan wrote half of the songs on the new one, and we worked on most of them with the entire band. It was great, and it made everything a lot easier and faster.

How does the album mark a progression for Tribulation?

It’s another step for us for sure, one in our very own direction. That was the most difficult thing for me personally when writing the album; we didn’t really know where it was going and we were doing something quite different. You just have to trust your intuition in those cases and it’s bound to turn out okay.

It’s not a concept album, the themes explored are more or less the same as on the previous album though maybe with more emphasis on some religious topics and less on the folklore, but it’s still there as well! It’s just a matter of changing the language anyway.

The album was recorded, mixed and produced by Ola Ersfjord. Why choose to work with him? And what did he bring to the album?

We got to know him some time before the recording and when we started to look for someone he came to mind and after a few meetings we knew we wanted to work with him. He was the one responsible for the piecing together of the recording sessions. He made the budget we had work since he managed to get different studios with everything we needed for a good price. He also made the album sound the way it does of course. We need someone with expertise and we got that!

Generally speaking, metal is considered a masculine genre of music yet the artwork for your new album features a darkly feminine character that is at once sexual and powerful. What does this feminine figure represent for Tribulation and the new album?

We’ve never shunned away from what’s considered feminine, it’s in all of us. The choice of the image was very much based on feeling, I didn’t analyse it when I first saw it. But it’s of course there for a reason. It represents the feminine side of divinity, the darker side. It’s obviously conjures up the image of the vampire which is a symbol that is teaming with sex and death, Eros and Thanatos. It’s the creative and the destructive, rebirth and death and so on. That’s why it fits us so well because we’re focusing so much on renewing ourselves all the time, or rather that’s what happens when we work the way we do. 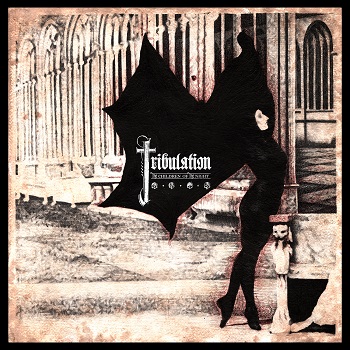 It’s a still from a silent serial film from 1915 called Les Vampire. Jonathan (guitars) made his own version of it by hand with ink, blood, coffee, pencil led and so on.

Where there are bands that are happy to sit within genre boundaries, Tribulation’s approach has long been very different. In your music can be heard bands as disparate as Dissection and The Doors as well as a whole host of metal and non-metal influences. What are you looking for in music and how does it inform the band’s own music?

I think I’m looking for music that I can disappear into, lose myself in. It is often quite calm and strange, but I also listen to stuff like Sadistik Exekution, it all depends on the mood I guess. I want music to take me places, to touch me and transform me, and I believe it has transformed me. The playlist I have on now, to give you an idea, consists only of Fabio Frizzi Philip Glass, Iron Maiden B-sides and chants from orthodox monks. I think a lot of that slips into the music that we make. We will never be satisfied with staying somewhere so rigid genres are just an obstacle for us.

Are there any limits to being Tribulation? Are there any styles – musically and vocally – that you would consider inappropriate for the band?

Yes, there are limits and I see them more clearly every day. The nice thing about that is that it makes you see new different possibilities. Sometimes it’s a very fine line that we balance on, and I really hope we can stay on the right track, I’m quite confident that we can. For one thing I don’t see us doing an album with entirely clean vocals; I think we might as well start a new band if we are going to do that.

Religion and horror – concepts that are as vague as they are rich in philosophical depth – are common themes for the band. What draws you to them for inspiration?

They have both always been a part of my life, and are the two things that really keep me occupied. I think I have just come to the point in the cycle of life where religion has become important. It’s the biggest thing there is I think, bigger than science even. Horror is there because of its appealing aesthetics I think, but most likely that has a deeper cause as well. It’s a great mix I think, the darkness and the unknown attractor.

In our last interview (mentioned above), your comments about the internet’s impact on the music “industry” suggested that music has become more about reaching people than monetary gain. Has music gone back to its roots as an expression of dissidence and disaffection?

I don’t know to be honest, but it’s changing that’s for sure. I don’t see that change as a bad thing really. Bands and artists can still be huge, but there are only like a handful of them around. It’s more difficult to keep track of things I guess because you don’t really have that “it’s either The Rolling Stones or The Beatles” thing going because there are so many of them (outside of that handful of Rihanna’s) and there’s not just two of each that get all of the attention. Can’t really be a bad thing right? On the other hand I guess The Beatles would have never really made all those phenomenal studio albums if things hadn’t worked out the way they did. There’s a time for everything I guess.

Have we seen the passing of bands as cultural icons?

No, I don’t think so. We have Lady Gaga and people like that. Maybe not as big as Madonna in the long run, but still.

Is the myth of the rock star dead? And if so, is this a positive step?

I don’t think it is, people want it to be alive I think. People still have this idea of the luxury of touring and that money just appears out of nowhere. I think it’s good in some ways as well because in the end it’s got a lot to do with entertainment and you will of course be more entertained by something and someone that’s “larger than life”, and in that sense the idea of the rock star can actually be something that can be of mutual gain. On the other hand people behaving like the biggest dicks might finally be something not to look up to.

What does the future hold for Tribulation? Is there more music in the pipeline?

I’m already inspired to write a new album, so you will definitely hear a lot more.

Will you be touring in support of The Children of the Night? If so, will we be seeing you in the UK?

We will be playing to shows in the UK in May, one on the Incineration Fest in London and one on Temples Festival in Bristol. Hopefully we can come back to do club shows as well!

Thank you too! Buy the album, chances are that you’ll like it a lot!