A portal to higher levels of Divinity…

With Ma Ion (Formulas of Reptilian Unification) released 27 February 2015 (reviewed here) through World Terror Committee (Website; Facebook), Acherontas again proved themselves a band like no other. Here, mainman Acherontas talks to MR’s Jason Guest about a number of subjects including the band’s evolution, their philosophy, the creation of the album and the involvement of a coven of black metal aficionados, tthe intellectualisation of black metal, the black metal circus, and music as a portal for those that dare see…

Thanks for taking time out for this interview and congratulations on Ma Ion (Formulas of Reptilian Unification), another accomplished and incredible album from the band.

Thank you very much!

This is your fifth album. Musically speaking, how does it mark a progression since 2013’s Amenti? Is this a continuation of what we’ve heard on your previous works? And how is it reflected in the album?

Evolution is our motivation in all ways of our being. We create Art only when we have the need to do so. When we started to create The new album with the purpose to reflect our Inner void in Music. I will not say as all bands do that this is our best work so far, but I will say that the Evolution in the spiritual plane and the creative expression was in Higher Standards.

Is there a theme, a concept or a narrative structure to it? And where did inspiration come from?

From our dayside and Nightside experiences. I will not describe the concept behind the new album this time. I shall let the Individual to Dream behind our Music and feel the vibrations by himself. All that were necessary to be spread Lyrically and philosophically were written in the Booklets of our new Esoteric work. Some things are better to remain hidden.

Exactly. All take shape in process. Our only vision was in the beginning what we wanted to express through feelings and vibrations. A portal to higher levels of Divinity.

Did the band collaborate on each track or do you work individually and bring ideas together?

We act as Coven in Creation. This is why we have the name as Coven behind our banner. We are a circle of close individuals that we act as one under one mission. Selected entities that approach the Art by a more esoteric way and not as most do in black metal scene by embrace black metal as one more kind of metal to party and have fun.

Though the black metal aesthetic underpins the albums, Acherontas have again combined elements of the avant-garde as well as eastern and shamanic instrumentation. What inspires this approach to your music? Does this approach allow for more creative expression?

From 1999 I am more close to genres out of metal. In more esoteric expressions of Art as classical music, Ritual dark ambient, Martial, Avant-garde and traditional East Music. Darkness has many forms. So from the period of Stutthof, I started to put and elements in our releases out of the standards of Typical black Metal.

The album features TT of Abigor, Nebiros of Malign, ar-Ra’d al Iblis of Nightbringer, Jhon Longshaw Azrvan Amam Akarana of Black Seas of Infinity, Edgar Kerval of Emme Ya, and Indra of Tatir/Goatvomit. Why did you choose to include other musicians for this album? And what did they bring to the album?

All the black Metal Music was Composed by the Basic Core. Me, Saevus and Hierophant. We choose these Individuals as I explained above that Acherontas is a Coven. We wanted different Vibrations to enter in our Core and what better to Invite Brothers and Friends that we are in touch Years and we have the same views about what is Black Metal and to cooperate with People that we share some common views in more esoteric Issues. This is something we always do over a decade. I hail all my Brothers that sacrificed their prana in this work. 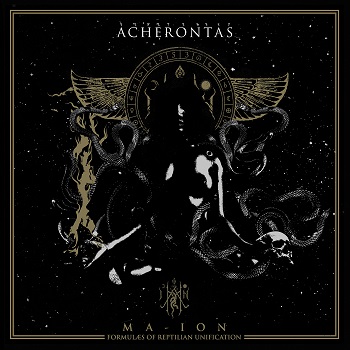 The artwork for the album, like the music, is very powerful. Can you tell us about the design, what it represents, and how it relates to the music?

The Normal CD version and LP that will come with the tape later this year have the design artwork by Cold Poison. The special edition by The Aural Hypnox label. I shared my vision with them and that I wanted something different out of the typical black metal standard to express my views in a deeper way. Acherontas is not a typical band. We are in a more ritualistic approach through our music. This is why we chose the individuals behind Ritual projects from Halo Manash and Arktau Eos to do the special version and Cold Poison to create quite different from what he used to do in past. I am totally satisfied and proud for the final result.

The band has been writing under the name Acherontas since 2007. How has it evolved? How does the Acherontas of 2015 compare to the band of the early days?

We just re-shape our Art in a more deeper level through the passing of Time. A physical Evolution.

It is the expression of our Inner world. Exactly what black metal represented in 90s and the reason that this music was created from the beginning. We shall continue to create till our inspiration demand it.

Which is more important to Acherontas, the music, the lyrics, or the atmospherics?

All are one. Black Metal without philosophy is an empty Womb. The image comes to unlock the subconscious of the individual to dream behind the skin of matter and to dive in his deeper shadowsides of existence.

Nothing has been revealed. The Ancients kept the secrets hermetic Closed till Now. The ignorant these modern days of trend at the Occult believes the opposite but is not True. Gnosis and Sophia are not free. To discriminate these days through experience is the most difficult thing that an Initiate has to do. I support the delusion in masses so the sacred Science to remain away from the polluted minds of Humanity.

Do you think that music is itself imbued with a power to provide an avenue into the unknown aspects of existence?

Music can sometimes work as portal to those with eyes to see and a secret power for few to embrace their potential.

The net and the modernism is like a poison. Sweet at the beginning and deadly in the end. If you can use this tool to make your life better is ok. If you are used by this then as all addictions and fake pleasures can turn you to a loser.Net helped the masses to reveal their pathetic faces in public…

I have never spent time for it. I am collector so is not my cup of tea. This is not the only thing that destroyed the purity of old era. 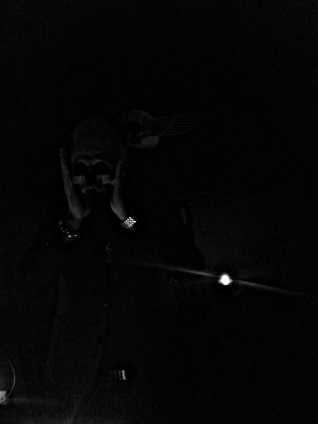 Black Metal has been turned in Circus. All suddenly became illuminated and we are full of pdf magicians behind their PC. All suddenly have bands. Black Metal for me lost his purity after 1998.The ambition of the Humans to become rock stars and attract the masses and to escape from the misery of their lives poisoned the Scene.

Let the madness of Art exult your being. Rationalism is useful to other things in your dayside activities. In Creation of Art there is no normal standard of Rational thinking.

Always. But for the moment we are focus on the ceremonies we have confirmed for this year. Also I will run stronger my Ritual ambient band Shibalba this year as I have the need to create in ways out of black metal.

You’re working with World Terror Committee again for the release of the album. Every band I ask this question of speaks very highly of the label and the support they give the artists. How do you find working with them? And do you plan to stay with the label for future releases?

WTC is the most pure, dedicated and professional label we have cooperated. We are totally satisfied and the present is positive 100%.

Many shows confirmed for this year but not tours. We are not touring. Maximum 3 shows in order. We have no interest to perform often and everywhere.

What would be the ideal setting for an Acherontas performance?

Exactly what we do till now.

Thank you for the Interview. Support the Underground. Spirit above matter. 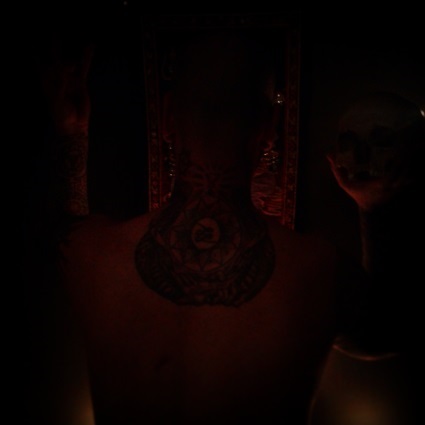