“Maybe I could become the first big pop black metal act and just mime along to backing tracks?”

Thank you very much for taking time out for this interview and congratulations on Solace For The Condemned (reviewed here). It’s been about a year and a half since Coffinships. To what extent does the new album mark an evolution for Abomnium? How has Abomnium progressed since then?

Thanks! I think Abomnium has evolved with each album, and it now feels like I really know what it is about. To me, SFTC feels musically much tighter, in the sense that it doesn’t genre-hop in the way that Rites Like Chains did. I look back on that album and realise that it was like an extreme metal bag of Revels – you didn’t know if the next song was going to be death, black, grind or one of those orange, coconut things!

There’s also a big leap in production quality this time around, and for that I give all credit to Chris Fielding. Recording this album with him at Skyhammer Studio really pushed me to deliver my best.

What was it that you wanted to achieve with Solace For The Condemned?

I wanted an album that was tighter, more focused and more grim than Coffinships. I’m delighted with it, and from the reviews and personal comments I’ve received it seems that a few other people like it too, which I am really happy about.

Is there a concept or theme behind Solace For The Condemned?

You mean like the story that ran through Coffinships? No, nothing like that this time. But if you read through the lyrics you begin to see connections between the songs in terms of the themes they touch on. Several of the songs on SFTC are about the importance of self, and about the need to make your own peace with who you are. 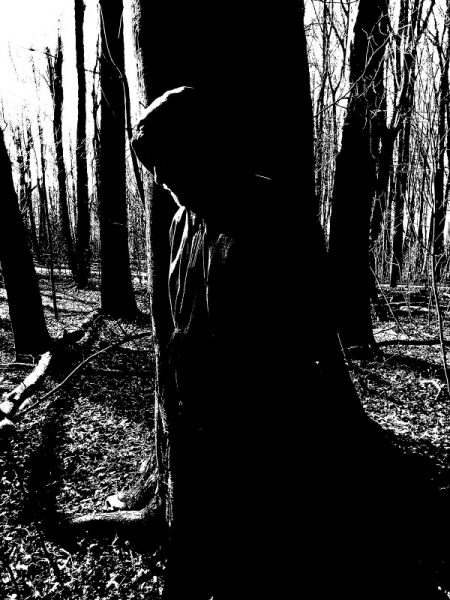 It took a while to name this album, as I wanted something that captured the feel of the whole album, rather than singling out one of the songs to be a “title track”. And then it struck me that there was a progression from the first to the last song: Condemned is a very bleak song about how we suffer the judgement of others, but with an absolute refusal to be broken by it. The album then closes with ‘Solace’, which is a very upbeat, very strong-willed song about taking comfort in who you are. I put the two of them together, and there it was. And it felt so natural and obvious when I had it!

It was very much evolution rather than planning. I just let the writing process happen, and then I took stock of where I was and started shortlisting songs and editing the demos that I felt were the strongest. In the last month before I entered the studio I was still writing and mulling over the song selections, and in fact two of the songs, ‘Paths Of The Dead’ and ‘Solace’ were written only about three weeks before I set off for Skyhammer to finalise the album.

How long were you working on material for the album? Is it all new material?

Yes, it’s all new material, and I wrote it after Coffinships came out. It was all written over the course of three big working sessions between February 2013 and February 2014.

In our last interview, you said that you had been a member of the February Album Writing Month (FAWM) community since 2008 and every February, take up the challenge to write 14 songs. Are you still part of the community and do you still take part in the challenge? If so, did any material you wrote for that make it onto the new album?

Yes, I still am very much part of that community, and all of the original demos for the songs on SFTC were written during FAWM of 2013 and 2014 as well as the summer challenge of “50 songs in 90 days” run by the same folks. It’s a very supportive community, and I get to experiment with all sorts of wonderful ideas that will never be Abomnium songs. It also creates a timebox for writing, and that means that I make myself write during these periods. I love that discipline, and without it I’m not sure that Abomnium would exist.

Was your approach to writing the same for this album as it was for the previous two albums?

Pretty much: it’s almost always guitars, drums, lyrics in that order. The initial inspiration for a song can come from just a single riff, a random piece of warm-up playing, or simply setting the click-track at an interesting tempo and recording things until something begins to emerge. The one exception this time around was ‘The Walking Man’ which, unusually for me, started with a lyrical idea. I woke up early one morning with the words, “a man walks to the edge of his life” in my head, and knew I had to do something with it!

Does composing by yourself provide any significant challenges? If so, how do you overcome them?

What, you mean other bands have more than one person writing songs? How the heck do they make that work? Don’t they fall out all the time? Hahaha! Seriously though, I think there is great freedom in writing alone. I can experiment with whatever sorts of sounds, lyrics and arrangements I fancy. I get to record demos at home at odd hours, and if something doesn’t quite work, I don’t need to struggle with it. I can just bin it and move on.

At the same time I’m always very aware that because what I do is all down to me, it’s good to get feedback from other musicians and to keep my ears fresh by listening to as many new bands as I can. And, of course, there’s the value of working with someone like Chris Fielding. His breadth of experience with extreme music really helped tighten things up when I was in the studio.

It’s bleak, isn’t it? There are several different elements in it that reflect themes from the songs. There’s the haunted sky for ‘Witchlight’, the graves for ‘The Paths Of The Dead’, the raven for ‘Crown Of Feathers’ and the Orion constellation for ‘Yad al Jauza’. On the inner pages you see the “squaring the circle” motif that I used on Rites Like Chains, as a representation of striving for impossible perfection, and lastly the little quote from Brecht that sums up the spirit of the album.

Who is the artist and how did you choose him/her? How much direction do you give the artist for its design?

The artist is Phil Robinson of Níðhöggr Studio. He’s done some fantastic covers for other UKEM releases (including the recent Cruelty’s Heart/Frostwork split), and came highly recommended by the label. It was so easy to work with him: I suggested Caspar David Friedrich’s The Abbey In The Oakwood as a basis for the art and shared some thoughts that go with the songs, and away he went. I love what he’s done.

You worked with Chris Fielding of Skyhammer Studios for production. Why did you choose to work with him? And what did he bring to the album?

I knew I wanted professional production for this album, and Chris first came to my attention from his work on Vehement’s EP, Collapse. When I looked him up and saw that not only had he worked with Winterfylleth, Primordial and Napalm Death, but also that he was based at Skyhammer with all that lovely vintage gear I knew I wanted to see if he would do it.

It was fantastic working with him. He is so calm and has such a great ear for what works and what doesn’t. He pushed my vocals to somewhere very, very dark as well. That distortion you hear isn’t an added effect, it’s just the sheer volume of the takes ramped up to distort the desk itself. Damn, it was hard to talk after a few days of that…

I was blown away when I heard the first mix. It was so much bigger, clearer and more grim than I would ever have managed in my own studio. To my ears this is the way Abomnium should sound, and I am very grateful to him for making this happen.

And, as well as all of that, he makes a very, very fine cup of tea. What a top bloke!

How do you see the band and your music developing?

I’m just planning to keep on going. Like I say, I think it’s now clear to me what Abomnium is, and what it sounds like. I just want to use this album as a foundation and see what happens next.

Any plans to put a band together for live performances?

I was offered a gig at a great local venue recently and it really made me think whether I can turn Abomnium into a live band. That was never the intention, and it would be a big change to get other musicians involved and start gigging. Maybe I could become the first big pop black metal act and just mime along to backing tracks?

What does the future hold for Abomnium? Early days I know but is there more music in the works?

Oh, absolutely! And it’s funny you should ask… I hit upon an idea for a full eight new songs just the other day when I was in a museum. It’s an interesting idea that’s very much in the spirit of Abomnium, and it’s also pretty ambitious. I’m going to take some time to work out how best to use it. Maybe the next time we talk it’ll be clear if it worked or not!

Thanks Jason. I really appreciate the support from The Midlands Rocks, and I hope you all have a wonderfully grim and frostbitten summer!