We are four guys, playing thrash and loving what we do…

Midlands metal crew Obzidian have shared a stage with some of the biggest names in metal. This weekend they perform at Amplified Festival in the Cotswolds before making their eagerly awaited Bloodstock debut next month. Oh, and they’re busy working on a new album. Exciting times, as Paul Castles finds out from drummer Paul Hayward.

Q: So how much are you looking forward to performing at Bloodstock this year?

A: We literally cannot wait! This festival has been on our dream list for so long it’s unreal and to be invited to play the New Blood Stage was a dream come true and to be honest, a little bit of a shock. We have come close in previous years but it never quite worked out, although we have always supported Bloodstock as punters and helped out with Metal 2 The Masses when possible.

Q: Is a festival show a good platform for a band as there will obviously be people there who haven’t seen you before?

A: It’s possibly the best type of way to get your music to an audience, whether current or new. I believe that there is far more “passing trade” at a festival and people are more open to check out something new than if they are enclosed or are in a “venue”. I myself have been part of that “passing trade” and found some of my favourite bands via the New Blood and Sophie stages. This applied to a lot of other open air festivals too and it is good to see even massive festivals starting to support grassroots bands with stage inclusions.

Q: Have you had a chance to look at this year’s Bloodstock line-up?

A: Yes, I have been on tenterhooks for every single announcement and I feel this year is an amazing line-up but also a good mix of styles compared to other years. Like I said, we are fans of the festival, so we can’t wait for new info to be trickled down via live streams and Social Media updates.

Q: Will you have the chance to catch any of the acts yourself?

A: I’ve quite an extensive list for all four days, but who we are able to catch on the Sunday will probably just be played by ear to be honest as we obviously have our own job to do that day. As long as we can catch At The Gates and Act of Defiance, we’ll be happy.

Q: So how’s the preparation building for the new album?

A: It’s going well at the moment and we have got the three basic structures and guitars done for all 10 tracks due on the next release, as well as all of the drums written. We are in the pre-production phase now and are hoping to get a single out this year and then the whole album early next year. It’s going to be a good one! Even the early stages of this material are sounding aggressive and Obzidian-like.

Q: Is there any particular theme or concept running through the songs?

A: At the moment, we probably have a handful of lyrics done and maybe two completed songs, so it is too early to say. Matty tends to take the lead with that kind of thing and after the amount of work that Damned Eternal was to produce and write, I don’t think the concept “album” will be a model we follow for a while now.

Q: How will it compare to your last album, Obliteration Process?

A: It will be more of the same but everything changed (I made that up myself haha). Essentially overall it is Thrashier and the songs are more focused, but with that said there are at least five tracks that I can think of that could be bolted onto the last album and fit perfectly, so we see this as a continuation but with constant improvement.

Q: Has the approach to writing a new album changed much for the band, this is your fifth coming up?

A: We have gone through a lot of processes. Damned Eternal was a lot of writing and going back and forth between myself and Matty on the lyrics, with Baz just dealing with whatever he felt like playing and Jeff’s pretty much playing what he felt was right on the day. Obliteration and Concrete were somewhat written “in the studio”, definitely Obliteration. That album was a collection of riffs that got produced and swapped around until we had some solid tracks, then I would lay down drums and Matty would pretty much write and edit his lyrics while recording, with the bass coming in at the end. It was all very off the cuff to some extent. I can see the new album being a mix of both, as we are already rehearsing the tracks so they will be ready to go, but there will always be experimentation and editing in the studio when parts don’t work or need to go on longer etc. We always just try to take our time and really work the songs until we are happy, and having 3.5 perfectionists in the band, it takes time haha.

Q: Does the process become harder or easier?

A: For us, it has always been quite relaxed as I am in charge of recording, mixing, mastering and producing our albums and with that comes new challenges but it also a very chilled environment. We could take a weekend to do one track of vocals or we could bang out three in a session, but either way we don’t have to worry about deadlines and what the budget is or what the spiralling cost is as we mould the album. But in many ways (with all of us bar one being family men and all of us having full-time jobs) the stresses change to time. Time is ALWAYS the killer for us.

Q: Any other festival slots on the horizon this year?

A: We have Amplified coming up this weekend (July 7/8) and then we will have to see what happens. Our management are working on a few things behind the scenes, but I think having Hammerfest, Thrashersaurus, Amplified and Bloodstock under our belts in 2018, that is a good and positive year for us. 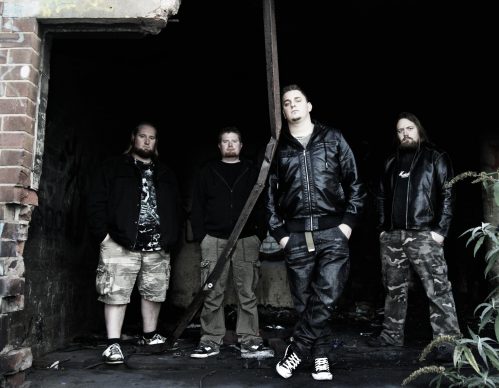 Q: Are there any tour plans for later in the year?

A: We have a few dates planned with our management buddies Blood Oath but apart from that we just have the odd show spread around. Again, time plays a big part in what we can and can’t do so “touring” in a traditional sense takes an extreme amount of planning for us but we will keep you posted!

A: We would love to and have been discussing that since, I think, Day 1! The problem we have at the moment is that Europe is not as cheap as it used to be and it is no secret that even big bands are struggling to bring in money from tours and album sales nowadays. It is something we are looking at but we have to be extremely careful not to make it something we regret. We want to enjoy our time our there so it definitely is on the cards but again it will take some organising to pull off.

Q: You’ve shared a stage with bands such as Sepultura, Crowbar, Il Nino and Arch Enemy – do you always try to learn something from that experience?

A: It’s always a learning experience playing any stage to be honest. Playing with bigger bands in bigger venues actually tends to be easier a lot of time. There is more crew to go around and they are all doing it for a living, so they are at the top of their game. It is an honour to have shared the stage with such amazing bands, band we grew up idolising and had posters on our wall of, it’s unreal at times and long may it continue. We have noticed of late however that more tour packages are coming through which does limit the amount of local supports that can jump on a line-up. With that said there are some promoters and venues that are trying their best to promote local bands along with the bigger acts. Surprise You’re Dead in Birmingham, Ovation Events in Birmingham, FatAngelBookings in Coventry (our amazing management), Resin Events in Leicestershire, Mick Wood down in Camden, and so many more across the country who are doing amazing work.

Q: Have you a goal that you’d like to reach with the band or are you just happy to see where things take you?

A: For the most part we are happy to go with the flow and see what happens. That by no means is to say that we don’t push ourselves and constantly strive to play festivals and venues that we hold in high regard, but we have never been a band to “put it all on black”. We are quite methodical and measured in our approach and it has seen us well so far. Maybe we haven’t progressed at the same speed as some other bands we play the circuit with, but we are four guys, playing thrash and loving what we do. We hope others can pick up on the love for the music and the genre and come along for the ride! If we had one goal, it would to carry on for another 17 years and remain the brothers that we have come to be. Every single person who comes to our shows is a friend and we treat them as such, that won’t change if there are a few thousand more of them in the future.