It says a lot about a band when they’re able to lift a sizeable crowd up from off their sofas on a snoozy Sunday evening, and make them traipse halfway across the city for an evening of melodic death metal.

But the Islington Assembly Hall is buzzing, with large crowds queuing outside for the prompt 7 o’clock start. Insomnium have finally reached London on their ‘Tour Like A Grave’ which has already passed through Europe before then jetting across the Atlantic to North America. The Finnish legends are promoting their eighth album, Heart Like a Grave –released last year – and have certainly drawn in the metalheads this evening, now beginning to congregate within the historic walls of the Grade II listed venue in North London.

Early onto the stage are Midlands moshers Conjurer. This is a band who are able to balance beautiful and delicate open riffs, with heavily distorted explosions of sound – whilst experimenting and playing continuously with tempos and time signatures. In just a single song, you may have to change your headbanging technique three or four times to just keep up with the mischievous beasts. 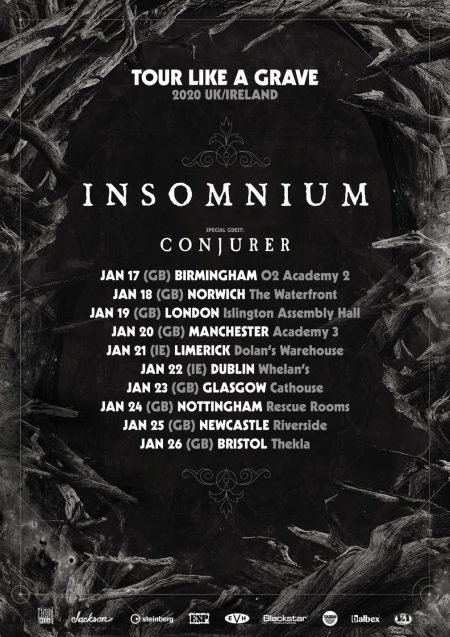 Dan Nightingale is a captivating frontman, at one point moving away from the microphone to the front of the stage, spewing his message in a fountain of saliva, his naked vocals crashing off the walls with unrelenting force, a silhouette of brutal authority.  Conjurer display an unbeatable understanding of the complexity and possibility of heavy music, progressing past the progressive.

Insomnium are a contrast to Conjurer. They are slightly more upbeat in tone and aesthetics; they are chatty and smiley. They begin the set with their backs to us, promptly spinning around in unison, guitars in hands. It’s a bit Motley Crue, but they look like they’re having a brilliant time. Rather than creating an atmosphere of doom and desolation, as do Conjurer, they are extremely ‘riff led’ and catchy.

This is not to say the guitar work this evening isn’t extremely impressive – continuing to produce memorable riffage for over 20 years is staggering. Like Type O Negative, like Paradise Lost – the Finns focus is on ‘the riff’ and it pays off.

Their new album is no different, ‘Heart Like a Grave’, ‘Valediction’ and ‘Neverlast’ – they all have that same sort of guitar work that seems to sing directly to your heart, working its way into your musical soul where it will lie until the end of time. Markus Vanhala is a wizard of the fretboard, leaping around the stage like a Billy Connolly lookalike.

Insomnium combine the brutal growls of Niilo Sevänen with the clean, heartfelt singing of Ville Friman, particularly effective on ‘Valediction’. Their melodic sound is one of beauty and emotion and the Islington crowd savour every note.