I feel sorry for my next door neighbour. The poor bloke works nights – long, cold nights. Throughout the festive period he has had to get up come rain, shine or even the pathetic bit of cold white stuff we had on Boxing Day, and endure 12 hours of working outside in the freezing cold and dead of night. That in its self is fairly sympathy-inducing. But this isn’t why I feel sorry for him, oh no. I feel sorry for him because the first album to hit my inbox – and therefore my stereo – is The Architect Of Extinction by Mancunian death metal heavy weights Ingested. Now I may be wrong, my quiet, reserved middle-aged next door neighbour may well be a huge slam fan but I can’t see it somehow. I, however, love this album and want to share it with the world as loud as my speakers will let me.

The Architect Of Extinction follows up on 2014’s EP Revered By No One, Feared By All and is the band’s first full length album since 2011. Since their debut in 2009, Ingested have built a reputation as one of the forerunners in modern death metal blending speed, aggression and riffs into a sound that is unmistakeably their own. The Architect Of Extinction is a further progression of that sound. All the trademark elements are there, crushing beatdowns, massive riffs, super-fast drumming and low end vocals. One of the things I like about this album is although the vocals are still heavy and low, they maintain lyrical hooks that lots of bands lose in favour of inaudible noises.

The whole album bounds along like a giant going for a jog. Tracks like ‘I, Despoiler’ and ‘Amongst Vermin’ are ferociously heavy. In contrast to these crushing tracks is mid-album instrumental piece ‘Penance’, which opens with melodic guitars before the drums start to swarm underneath, brooding with intent. The piece builds into a tech-death-tinged guitar fest with big grooves and a blistering solo towards the end. ‘Penance’ provides a reflective moment for The Architect Of Extinction, a mere three and a half minutes of relative calm before the album explodes back into full power.

A superb continuation of form from the mancunian bruisers, if you’re looking for something well written, well produced and extremely heavy then you can’t do much better than The Architect Of Extinction. 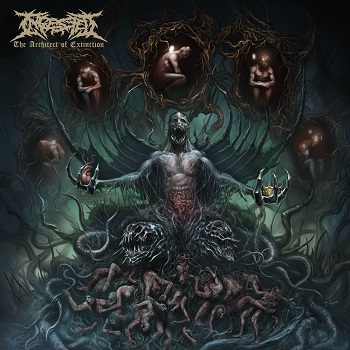