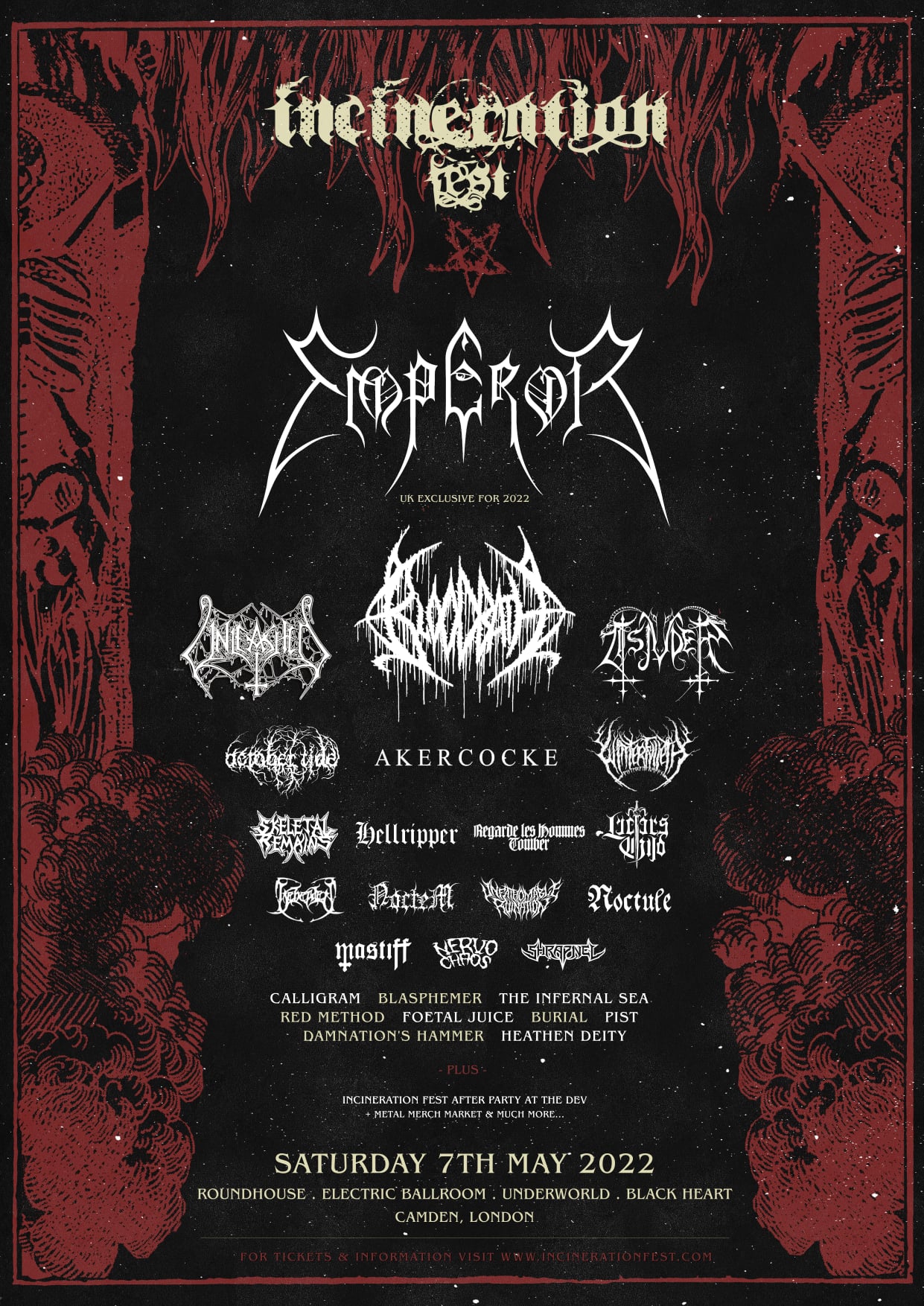 It’s been a grisly two years without London’s most cherished black metal festival. The blackest plague wreaked havoc on the blackest of music, our hearts left empty of corpsepaint and studded belts. But now the wait is over, and the slow grumbling of heavily distorted amplifiers can be heard in the distance. Incineration Festival is coming for us, bigger and better than ever.

This is the first year that the festival takes on the iconic Roundhouse, alongside the usual Camden culprits – the Underworld, Black Heart and the Electric Ballroom. Bringing the Roundhouse into the mix demonstrates the impressive growth of this underground festival; it’s bursting at the seams and now spilling out into North London’s most prestigious venue.

The day kicks off with London-based Calligram at the Electric Ballroom, frontman Matteo Rizzardo causing a near-riot as he jumps around (and on!) various bandmates as they struggle to stay on their feet. He throws himself onto the floor, wriggling around as the rest of the band try to focus. This brutalist music, blackened hardcore, is devastatingly haunting.

Down in the murky, beer-sodden, depths of the Underworld, Noctule make their debut. This is the solo project of the captivating Serena Cherry of Svalbard. She humbly tells us that she created this debut album (Wretched Abyss), during lockdown and how thrilling it is to finally be performing it for us live. The band enters after a long, eerie build-up and Serena takes her place behind a skull-embellished stand. She introduces each song thoughtfully and impassioned – each element is full of reason and purpose. The new album is beautiful, which is demonstrated this afternoon. It’s full of heartened melody and synthesizers, all which meld together to build an atmosphere which proves otherworldly.

Back over at the Electric Ballroom, death metallers Unfathomable Ruination take to the stage. They are headed by guest vocalist Mallika Sundaramurthy (of Abnormality), who has flown over from Prague especially, standing in for Ben Wright who was unable to make it. Mallika is high-powered and gels well, however the band are unfortunately plagued with a few sound issues this afternoon.

Meanwhile, a queue has begun to form outside the Roundhouse as metalheads wait (somewhat impatiently) to take their place for Winterfylleth (below). Unfortunately, doors open quite late and due to the necessary security checks, the Mancunian’s receive a smallish crowd that then builds steadily throughout the set – by the third song or so, everyone is finally in. This is another band that discuss the pleasure of at last being able to play their new-ish material (The Reckoning was released in 2020) in front of a live crowd – and the hordes queuing to witness it shows just how highly-anticipated this new material was and still is. Winterfylleth are hypnotic. 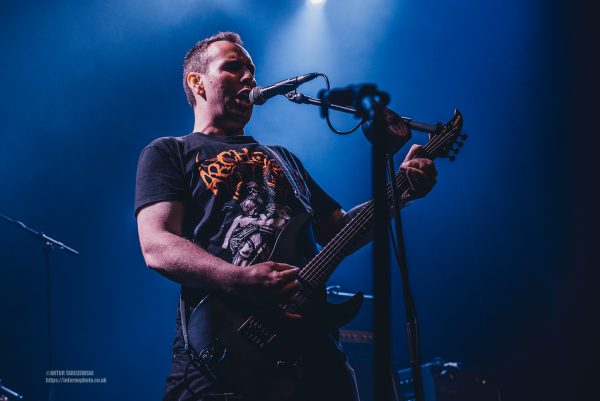 A massive draw for metalheads this year are black metal legends Tsjuder (below), making an exclusive UK appearance. Their last time on UK soil was at the 2016 Incineration Festival, housed within Tufnell Park’s Dome. Going from a 500-person venue to a 1,700-person venue demonstrates significant growth for the band, and for the festival as a whole. It’s great to see. The fierce Norwegians are solemn and severe, as only True Norwegian Black Metal can be. Covered in traditional corpsepaint, long Viking hair flying in the wind, these catchy riffs and brutal growls are everything this hardcore black metal audience demand. 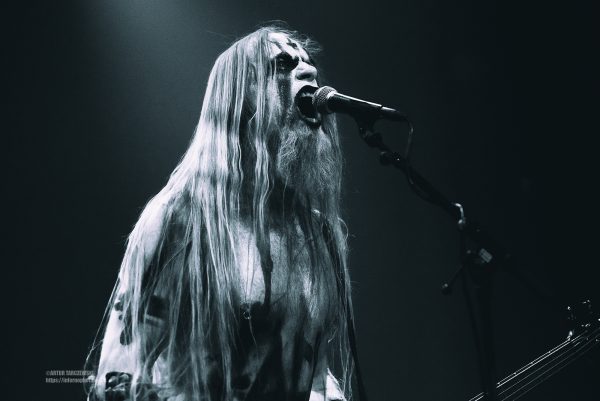 The Norse men are followed by Bloodbath (below), which frontman Nick Holmes introduces in a broad Yorkshire accent as ‘from Sweden’ – indeed, the other members are, but there is an element of comedy with this coming from the mouth of the irrepressible Paradise Lost frontman. Nick is always a laugh, a sarcastic stage presence which emulates a guy from the local pub that’s stumbled onto a stage. He wears sunglasses to begin with, eventually removing them and telling us he can’t see anything, and that he was simply trying to protect us from his ‘frightening’ demeanour.  They receive a welcoming crowd with a solid number of pits. 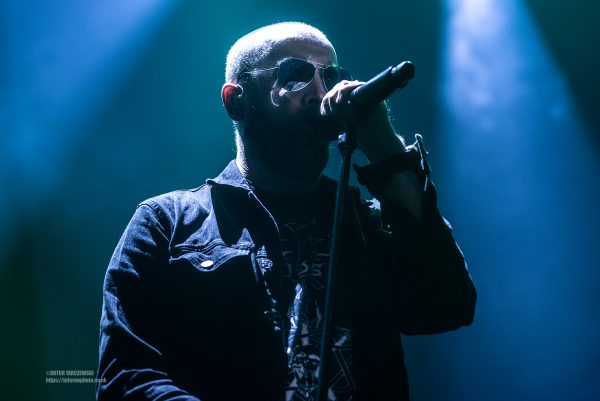 Ending the night and this wonderful day-long festival that we are so incredibly thankful is back and has survived the harsh realities of Covid-19, is the monumental Emperor (below) – making their first London appearance in a jaw-dropping 16 years. Fundamental in the founding and development of black metal, these pioneers are Gods for many gathered here in the Roundhouse this evening. Despite not producing any new material for over 20 years, Emperor remain as relevant and present as ever. The crowd hooks onto every riff and every word, with fierce moshpits and ecstatic crowd-surfers filling the room. Each song is a journey into another world, new to some but familiar to most. The encore ends with ‘The Majesty of the Nightsky’ and with that, we head out into the night sky ourselves – hearts full of blackened gold. 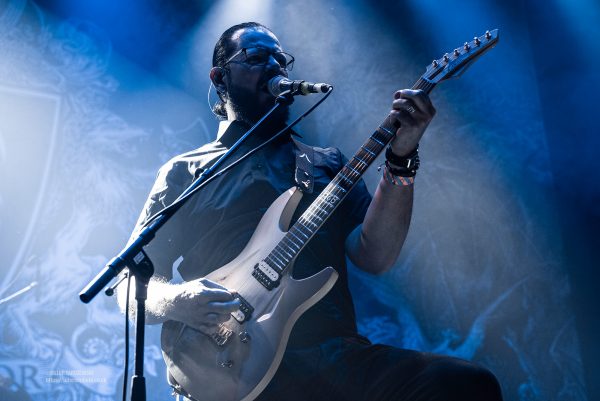