Any tourists that happen to be walking down the bustling Camden High Street this Saturday morning can be forgiven if appearing a little confused. Is today actually October 31? Or perhaps there is a Walking Dead convention in town? Not quite. The line stretching all the way from the doors of the Electric Ballroom to Camden Market is actually a queue of corpse-painted, Black Metal worshippers ready to have their faces melted by some seriously dark stuff. After about half-an-hour of waiting, we are finally released like hungry wolves into the Ballroom.

The set-up today is impressive. Considering this is just a one-day festival, the merchandise stalls are extensive and wide-ranging. The main stall is still at the bottom of the staircase, but upstairs there is a whole cornucopia of stalls. Each band performing today has their own table while other stalls battle for our bucks with a smorgasbord of T-shirts, books, CDs, Vinyls – you name it. That’s my money spent almost instantly, then.

First on are London’s very own Voices featuring Akercocke’s Sam Loynes. I caught Akercocke a few months ago at The Garage, and was astounded at Loynes’ ability to balance playing the keys whilst moving his arms in spell-ish circles. I am now even more astounded to find that he can also do this whilst on guitar. Voices ease us into the Black Metal sphere with gentle, unsettling riffs and clean, haunting vocals combined with bestial cries of pain – particularly affecting in their closing track, ‘Endless’.

Familiar Northern raiders Winterfylleth storm the stage soon after, following a short soundcheck in which vocalist Chris Naughton ponders lighting options: ‘Green?’ he suggests to the invisible technician in the shadows behind us ‘or perhaps red?’. Winterfylleth offer the ultimate atmospheric set – without gimmicks or even a hint of a crucifix. This dark, pitiless music offers a gut-wrenching soundtrack to human despair. Naughton introduces ‘The Honour of Good Men on the Path to Eternal Glory’ – telling us that it’s been a while since the band have performed it live. Opening with just a single guitar and a single riff, and exploding into tuned-down, distorted devastation, Winterfylleth balance the delicate with the deadly. Naughton thanks those followers who have been with the band from the very beginning before descending into their epic set closer, Mam Tor (The Shivering Mountain)’ .

A change of pace next with Shining. Enigmatic frontman Niklas Kvarforth repeatedly snarls: ‘You’re idiots’, spitting water out over a sea of willing (and wet) fans. This is the first set of the day which truly gets the Electric Ballroom crowd moving – a circle pit at long last! Kvarforth crouches down, shielded by his grim-reaper hood, sharing stories of suicide and depression. Fast drums and psychedelic alternate string-picking frame this set with the Swedish singer’s monstrous vocals tying it all together – at times, he sounds like he could be playing a Mordor Orc. Despite the themes, this is a lively performance with fist-pumping and more crowd interaction than we will see for the entire evening.

While the nearby Underworld and Black Heart are also staging their own dark performances throughout the day, the sheer magnetic pull of those performing at the Electric Ballroom makes it almost impossible to tear yourself away from Incineration’s headline stage.

And so now we move into the truly Satanic stuff with the legendary Carpathian Forest. The stage has been decorated with Norwegian flags and many in the crowd have miniature ones which they wave furiously in salute of ‘True Norwegian Black Metal.’ The founding fathers explode on to the stage, singer Nattefrost in a monk outfit wielding a mic with a corpse head hanging from it, throwing the crucifix dangling from his neck up to the sky in the ultimate act of defiance. Carpathian Forest have all the themes that are required for a real Black Metal band, even dedicating ‘He’s Turning Blue’ to the late Keith Flint. Overall their sound is much faster and with an almost punk-like DIY feel with vocals that race and guitars than follow basic chord progressions. In short, it’s rather more upbeat than a lot of Black Metal. Nattefrost brings out Kvarforth halfway through the set to perform ‘Mask of the Slave’ – a two-pronged vocal attack adding to the sense of energy and fun. Carpathian Forest’s set is bursting with black metal anthems, ‘I Am Possessed’ the obvious crowd-pleaser. Their set is a real highlight of the day.

As the evening continues , it is clearly time for some orchestral Black Metal – enter the Greek titans, Septicflesh. Dressed in their trademark armour-suits, frontman Spiros Antoniou leads them out onto a stage of fire, plastered with imagery from their 2017 Codex Omega album, growling ‘Welcome, my friends!’ on numerous occasions (in fact, I can’t be sure Antoniou said anything else other than this – nice chap!). Their set is plagued by addictive riffs, opening with ‘Portrait of a Headless Man’; dramatic classical strings and choral backing vocals ring out through a sound system whilst hard guitar work is manipulated live on stage. This balance is what has come to define Septicflesh; that distinctive diet of chiseled Black Metal throbbing with extreme, dramatic, gut-wrenching, glorious orchestral interludes. Mozart with a distortion pedal. They plough through their greatest masterpieces – ‘Communion’, ‘Anubis’ (which must have one of the best riffs ever written) before ending with ‘Dark Art’.

Incineration concludes with the most eagerly anticipated band of the day. The Electric Ballroom is unbelievably packed, with each body shoved against the next like tinned sardines. Despite this, people from the back still attempt to push through the throng – walking through brick walls to catch a better glimpse of living legends. After a long atmospheric build-up, Mayhem enter; the most blasphemous, the most sinful, the most notorious – afflicted by mystery, death, crime, devastation and sinful speculation. They walked through hellfire into a 1990s Norway and have been ripping the world to shreds ever since. Much of tonight’s set is taken from their iconic 1994 album De Mysteriis Dom Sathanas – old school Black Metal conjuring images of desolate lands where ruin and ravage is habitual. ‘Freezing Moon’, amongst Mayhem’s most infamous and career defining songs, is harrowing tonight. Graphic antics are kept to a minimum tonight – just the one pig head on show. Closing with ‘Pure Fucking Armageddon,’ Mayhem remain a band who inspire devotion, commanding near mythical status and ungodly allegiance wherever they go and whatever they do. This is as close as a metalhead can come to being in the presence of the unholy father, the brother of sin, the unlawful Lucifer. Tonight is a night with Satan himself. Pilgrimage complete. 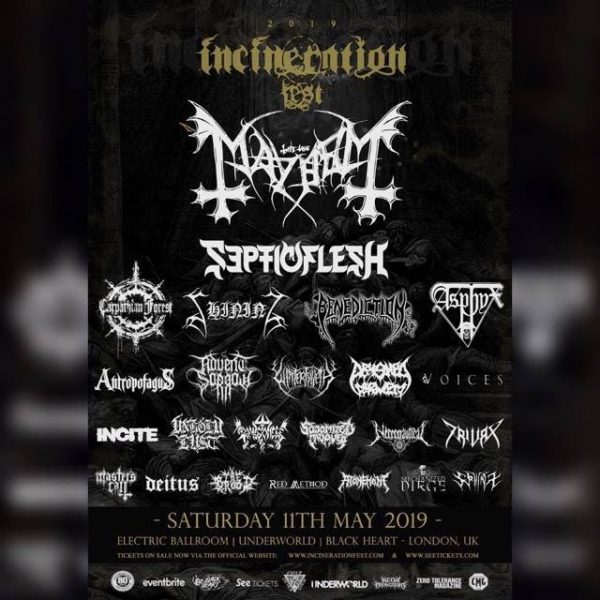