Imperial Triumphant operate inside some kind of weird dystopian bubble, one in which you’re unlikely to stumble across too many other bands who fall loosely under the metal family umbrella. The New York triumvirate, who shield their faces with garish golden  masks, almost as though lifted from the Valley of the Kings, play a heady mind-numbing concoction of jazz and metal fused with a whole range of disorientating side dishes that make smooth digestion of their latest album Alphaville a challenge.

This in no way condemns it. Quite the opposite. As those who saw Imperial Triumphant perform at Damnation Fest in Leeds last November can attest, the Americans are a compelling composition, just don’t expect a shower of blastbeats and headbanging riffage. Any semblance of a groove is also most likely to be concealed within an impenetrable wall of stop-start industrial jolts that infiltrate most of the nine tracks. Few bands readily invite comparisons with Imperial Triumphant, although undoubtedly Norwegian blackened veterans Dødheimsgard operate in a similar sonic sphere.

Alphaville opens with the suitably bleak and disconcerting intro to ‘Rotted Futures,’ which eventually expands into a rhythmic pulse over which band founder Zachary Ilya Ezrin’s deathly low growls are eventually layered on top. Any thoughts of this being just another death metal record are quickly shattered when the symphonic soundtrack starts to splinter off into so many divergent parts that keeping tabs on all of them is simply impossible. An additional burst of choral voices make Alphaville’s opening song mysterious and memorable at the same time. Rather than roll straight into the second song ‘Excelsior’ the temptation is simply to rewind and replay that first opulent offering to see if you can make better sense of its myriad of back alleys and and aural cul de sac’s.

If you do just let the songs wash over you, one after the other, then ‘Excelsior’ sees the New Yorkers whip the tempo up a notch, spreading a more fearful note as tensions are pulled tighter, the beats tumbling with greater force from extraordinary drummer Kenny Grohowski while still not necessarily landing at the spot you expect them to. Some mid-track sorcery sees things wound down against a disparate backdrop of clattering and general aural chaos through which more accessible lines of engagement are as ever with Imperial Triumphant tricky to discern. Eventually an industrial grinding wheel begins to circle, a repetitive brain-crushing assault adding to the general sense of destruction.

Imperial Triumphant have always demanded a lot of the listener, stretching back to their debut full length Abominamentvm in 2012. ‘City Swine’ is the first number on Alphaville that doesn’t necessarily threaten to blow the boots off your feet, a slightly more irreverent and transcendental feel taking over instead, while still retaining its full quota of hypnotizing time change and sudden U-turns that disorientate and debilitate. A sequence of keys leaves you spinning while the gruff vocals offer little in the way of restorative qualities. The track is also noteworthy for the guest appearance of Meshuggah drummer Tomas Haake, who offers Kenny some support on the distinctive Taiko drums. 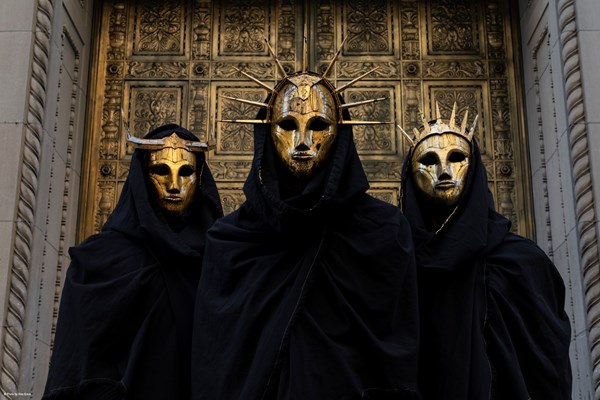 ‘Atomic Age’ is the album’s longest piece at almost nine minutes and opens with a shuddering abrasive riff, albeit one where you can at least relate to the rhythm. Calm descends quickly enough, although with Imperial Triumphant discourse and peace are never likely to remain stable for long. The challenge with the three technically adroit musicians – Steve Blanco completing the line-up on bass – is often in trying to ascertain which direction they’re heading next. No easy ask!

Take ‘Transmission to Mercury’…. the opening sequence is a somnambulant sax played sparingly over an equally lethargic piano, only after two minutes does the tsunami sweep in with rattling layers of instrumental indulgence alongside the death march vocals, adding a funereal feel as the whole thing eventually heads out of sight towards a kind of existential ether with screeched female tones ensuring an utterly discombobulating and unnerving listening experience.

It was really the band’s third album Vile Luxury (2018) – a kind of sonic homage to their home city – that saw them make their mark on the world of metal and extreme music in particular.  So the pressure as always in these situations was on to supplant that, a goal the Big Apple agitators have responded to brilliantly on Alphaville, the title track itself another mesmerising bewitching and befuddled eight minutes of cajoling and creating. As so often with Imperial Triumphant the track has an immense sense of purpose and resonates atmospherically as with an epic film score; the album is named after Jean-Luc Godards’ 1965 dystopian sci-fi classic. While that movie was all about Paris, the three musicians found ample parallels with their own New York home to allow for an obvious and understandable comparison. The stunning album artwork from acclaimed artist and illustrator Zbigniew M. Bielak aesthetically complements the album’s immense sound.

After another inspired composition in ‘The Greater Good’, Alphaville ends with two covers, the first Voivod’s ‘Experiment’ which blasts into life full of testosterone surges. An interpretation of The Residents’ ‘Happy Home’ brings a magnificent album to a suitably eclectic ending.

Anyone wishing to get up close and personal with Imperial Triumphant during these concert-free times has the chance to do so when they provide live support to Polish black metal kings Behemoth during their forthcoming live immersive stream ‘In Absentia Dei’ on 5 September. Everything you need to know about booking your very own front row seat can be found right here.

Alphaville was released on 31 July 2020 via Century Media Records 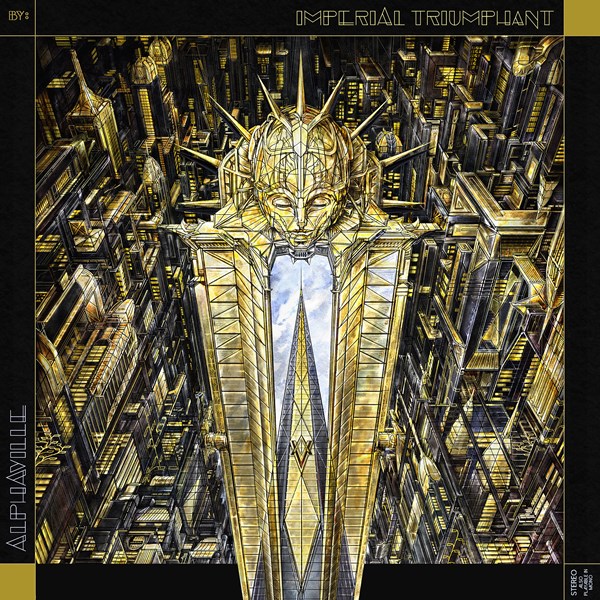