Paul ‘is it me, or is it hot in here’ Castles gets his fingers burnt by the new album from death metal giants Immolation, released via Nuclear Blast on 24 February 2017

While never quite managing to surpass the likes of Cannibal Corpse and Dying Fetus in T-shirt sales, Immolation nevertheless have always been held in the highest esteem by anyone with a knowledge and desire for nose busting death metal.

Atonement is the New Yorkers’ tenth album and stands shoulder to burly shoulder alongside most of what’s passed through their hands over the past 29 years. There has always been a darker side to Immolation that has helped them to keep their distance from the more conventional guts ‘n’ gore brigade who proliferate the DM scene. Immolation have usually found enough to turn their stomach in the unforgiving reality of everyday lives rather than turning to comic books and splatter movies for their inspiration.

The band’s debut album Dawn of Possession was released via Roadrunner (remember them!) in 1991. Since then labels have come and gone but the core sound and consistency levels for which these veterans have always been noted for has rarely slipped.

Timeless titans such as Failures For Gods (Metal Blade) and Harnessing Ruin (Listenable) have enabled Immolation to dine at the top table of death metal for very nearly three decades. Atonement is their third release issued via Nuclear Blast, following on from widely acclaimed 2010 offering Majesty and Decay and 2013 release Kingdom of Conspiracy.

Immolation take the door off its hinges right from the opening vicious volley that runs like a stampeding bull through the heart of first track ‘The Distorting Light’. The percussion is dangerously powerful while there’s a searing riff that you could hang your coat off. Ross Dolan’s deep delivery completes the package and as the album develops the confidence that goes with maturity starts to assert through the compelling grooves.

‘When the Jackals Come’ maintains the early thread  but here Immolation at one point gradually let the tempo ease, before planting almost doom like seeds that steadily start to prosper into a menacing rasping riff. On tracks such as ‘Fostering The Divide,’ Immolation veer off into more tech death laying down a rhythmic patchwork that you almost need to take notes on to keep up with its assorted destructive paths.

While never just speed merchants, Immolation can increase the flow when it suits them to do so and certainly ‘Rise The Heretics’ is one of the pacier numbers, and also features a skyscraper of a breakdown that would cause an outbreak of stompin’ within any pit.

A deep drone as though emanating from a smog lined Victorian dockyard opens up ‘Thrown to the Fire’ which builds into a methodical slowburner with its anti-war stance echoed by Dolan… With harsh souls of ice, and sharp tongues of fire, They promised us peace, in pieces they left us, Minced up for glory, devoured like prey, Millions of corpses paving the way.

As though to emphasise the depths that they can drill down to the suffocating track ‘Lower’ almost has to drag itself across the floor, steadily encouraged along by some brutal blasts of persuasive power. The war on terror, as it’s so often referred to by assorted statesman on both sides of the Atlantic, fuels the flames on the album’s tumultuous title track with Dolan warning… Pray all you want for your sins, Beg all you want for your soul – There is no atonement.

Dolan has spoken at his sense of relief at finally getting this album out, the wheels slowing at one point when drummer Steve Shalaty broke his ankle. But now it’s here and the wait as you’d expect has been worth it. Atonement is an album you’ll want to return to and on each occasion you do you’ll discover something new about it, a hook, riff or mighty drum blast.

The raging fires of Immolation are burning as brightly as ever. 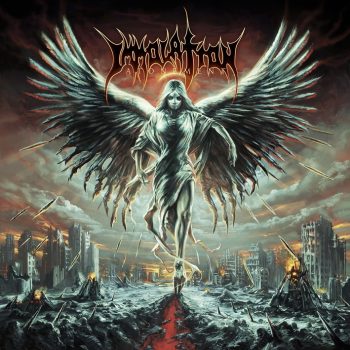