Yes, he was (and still is) a “street-walkin’ cheetah with a heart full of napalm”, but by 1973 Iggy and the Stooges were in freefall, in a blazing tailspin and ‘You Think You’re Bad, Man?’ captures this moment in all of it’s blood and drug-stained glory. Be warned, this isn’t pretty, but it’s sure as hell compulsive listening.

This box set consists of 5 discs, each one a separate show from the Stooges doomed 73-74 tour. Why doomed? The Stooges trajectory was set to self-destruct. Their fan base was waning, their record company had lost any faith in them and were, frankly, sick of finding out what spectacular act of self-immolation Iggy would commit next. Their latest record, (now rightly regarded as a classic) ‘Raw Power’ had, for want of a better word, stiffed. Despite being co-written and produced (badly) by David Bowie. They were seen as David’s latest whim, his new plaything that would eventually be cast aside.

Iggy himself was regarded as a dead man walking, rock’s soon-to-be latest casualty. And to be fair, Iggy didn’t really disagree, not for nothing was one of his latest songs entitled ‘Death Trip’. The band were also in disarray. James Williamson had been drafted into the band, relegating original guitarist Ron Asheton to the role of bass player. Ashton, in an understandable fit of pique, then decreed that the band would not play any of the old material if he wasn’t the guitarist – so, ‘Raw Power’ material and new, as yet unrecorded songs constituted the set list. Audience’s weren’t happy, they wanted to hear ‘I Wanna Be Your Dog’. Tension was rife.

So, before we dive in, a word of warning. The sound quality on these CD’s is average to bad bootleg quality. It’s quite extraordinarily muddy. Instruments and voices drift in and out of the mix (if, indeed, there is a mix). One music writer at the time wondered if one of these shows had been recorded by a tape recorder left in a bin across the road from the venue. It takes a certain amount of dedication to listen to these, they’re not for the casual fan or lover of pristine fidelity. You probably won’t listen to them often, but as a social document of a legendary band going down in flames, this is damn near essential.

Disc One has probably the best sound quality of the set…and it’s not great. The performance too is brilliant. The band tear into songs with abandon, ‘Search And Destroy’ in particular is a thundering train wreck. Despite being one of the original punk influences, The Stooges aren’t afraid to stretch out and jam, man. It becomes almost free jazz at times, vamps being elongated to breaking point while Iggy free-forms and abuses the audience, at least three songs here tip the ten minute mark. ‘Open Up And Bleed’ in particular is incredible – it’s sinister, volatile and cathartic, Iggy pummels, threatens and cajoles while the band create an unholy noise behind him, eventually collapsing to a beaten, bleeding stop…before picking themselves up again. It’s almost art rock, there are definite shades of The Doors. Who cares about sound quality when the performance is this committed and iconic.

The sound quality does, however, become more of an issue as the road takes it’s toll on the band and the performances become more…frayed. The sound deteriorates for disc two, as does Iggy’s relationship with the audience. It’s a tinny, almost mono sound, with way too much piano. By the end of the first song the audience are being baited – “somebody here must like us”. ‘Gimme Danger’ is ominously heavy, there are confrontations happening off-mike, while ‘Search And Destroy’ is fucked up and looking for trouble. “It ain’t too easy being The Stooges sometimes” laments the Ig and placates the audience by reciting the lyrics to ‘I  Wanna Be Your Dog’.

Disc three degenerates completely into aural sludge. Rock ‘n Roll rumour has it that this show was recorded by a tape deck stuffed down the y-fronts of a biker somewhere in the crowd. Sound-wise there are pretty much no redeeming features to this disc. Iggy seems to have decided to refer to the audience throughout as “bitch”. New tracks are introduced but it’s kinda tricky to critique songs that you can’t actually discern. Iggy’s between song abuse also disappears into the blurry ether. A punked-up Chuck Berry riff appears as does an almost vocal free, incendiary ‘Search And Destroy’. “Scratch me” screams Iggy at one point and you begin to get the feeling that he’s out in the middle of the crowd somewhere. The set becomes increasingly wired and stoned.

Disc four is interesting, in a bad way. The sound quality improves, ever so slightly (well, it had to). The crowd sounds bigger, more vocal, although the show sounds like it was recorded from the merch stall. Songs start to collapse in on themselves, Iggy sounding badly slurred. “Go home” cries someone in the crowd, and, this time, it’s hard not to disagree. This sounds drained, tired, drugsick. They premiere ‘I Got Nothin’, which would finally surface on the brilliant ‘Kill City’ album (imagine Lou Reed fronting ‘Exile’ era Rolling Stones – it’s that good), and it becomes the de facto title of the gig. The Stooges genuinely have nothing to give. Iggy says as much several times and later went on the record to describe the show as “the worst we ever did. Alcohol was responsible”.

Which brings us to Disc five. The final Stooges show (until they reformed in 2003). The legendary ‘Metallic KO’. This deserves a bit of background info. A few days previous to the show, The Stooges played a gig in Detroit during which a biker gang turned up. Iggy duelled with them until, finally, a biker got onstage and beat Iggy to a pulp. Iggy then went on local radio to challenge the bikers to a rematch – and here it is, in all it’s lo-fi glory. The sound is, again, tinny, with a vague added vinyl crackle. Songs stop dead, the gaps between songs are agonising, the band tuning up while Iggy spars with the mob – “you pricks can throw every goddam thing in the world, and your girlfriend will still love me”. ‘I Got Nothin’ is renamed ‘I Got Shit’, Iggy repeatedly calls for them to play ‘Louie Louie’.

The mood darkens. ‘Gimme Danger’ is languid and badly fucked. ‘Cock In My Pocket’, in an amusing Freudian aside, is described as having been “co-written by my mother”. Pop alternates between ad-libs and attempting to scream his tonsils out – “I’ve been egged by better than you”. The sound of projectiles hitting the stage gets louder. We end on what Iggy describes as a ‘Louie Louie’ moment – when the situation you find yourself in has become so weird, so surreal, that the only logical thing to do is sing the Kingsman classic for 55 minutes. It’s an entirely fitting finish, it’s the ultimate big, dumb, proto-punk riff. The motherlode, the progenitor, Iggy strips everything back to it’s prime essentials and takes us back to garage rock ground zero…the last thing you hear is bottles smashing on microphones. The Stooges have left the building.

So there we are. If you’re a Stooges fan, you’re going to want this. Much, if not all of this, has been released in various unofficial forms before, but it’s nice to have it all in one easy accessible set. Plus it has a nice booklet chock full of photos and liner notes by the great Kris Needs. Hindsight is a great thing and we can listen to this safe in the knowledge that Iggy pulled through and made it out to the other side, firmly set in place as an elder statesman, a bona fide rock icon. Ignore the sound quality and revel in the chaos. 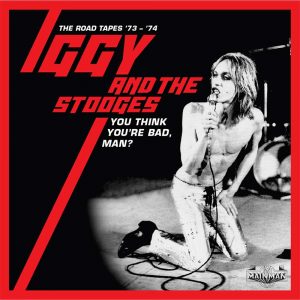 Disc 1: Live At The Whiskey